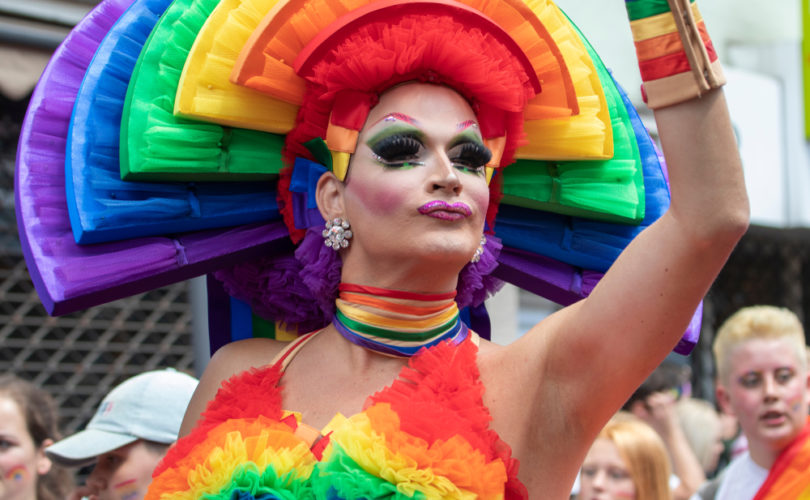 BURLINGTON, Ontario, April 21, 2021 (LifeSiteNews) – The Halton Catholic District School Board (HCDSB) delayed voting last night on a motion to fly the rainbow-colored homosexual pride flag at all board-run schools during the month of June. This happened as a result of delegations for and against the motion consuming the 2 1/2-hour time limit for the meeting. The meeting started at 7:30 p.m. At 10 p.m., the majority of trustees voted not to extend the meeting.

Of the five delegations, three were in favor and two were against. The first delegation to oppose the raising of the pride flag was a team effort by local parish priest Fr. Janusz Roginski, pastor of St. Gabriel Church in Burlington, and a local dad with four children in HCDSB schools (watch here beginning at 1:52:29).

The dad pointed out in his presentation that the rainbow flag, from its very beginning in 1978 as part of San Francisco’s homosexual movement, was a “symbol that promotes a world view with elements that are incompatible with the Catholic faith.”

“From its inception, the rainbow flag was connected to the positive affirmation of the active homosexual lifestyle. According to the Catholic faith, any sex outside of the sacrament of marriage is a sin and goes against her moral teachings as highlighted in the Catechism,” the dad stated.

The dad pointed out that the HCDSB operates by principles that it adopted in 1996 that make clear its commitment to providing children with authentic Catholic education. He listed the following three principles from the board’s Policy I-22:

The dad argued that flying the pride flag would put the board at odds with its own policy.

“The board, in its own list of principles, promises to teach the authentic truth of the faith in line with the Magisterium. St. John Paul II’s Catechism states clearly that any sexual activity outside of the sacrament of marriage is a sin, and all single people, including homosexuals, are called to chastity.”

A flag that represents pride for an “active homosexual lifestyle” contradicts Church teaching on homosexuality, he said.

In response to a question from a trustee about whether or not flying the flag would address the root of the problem of bullying in school, the dad pointed out that, so far, the motion to fly the flag has only caused division in local communities. The board received hundreds of letters before the meeting for and against the motion that showed just how divisive the matter was.

“I’m against bullying of anyone under any circumstance and the flying of that flag will not fix any problem. It only brought divisiveness into this community and only brought attacks from both sides. There's a way to speak respectfully and there's a way to speak disrespectfully. And what's been going on in the last few weeks is not good. So this flag is not a cause that is unifying Catholics,” he said.

Fr. Roginski, in response to a question about the Church’s teaching on sin in reference to homosexuality, clarified that while everyone is loved by God, there are various “actions, behaviors that can be sinful.”

“And these actions, if they are sinful, need to be condemned. And they are clearly outlined as such in the Bible, and in the teaching of the Church, and the tradition, and even in the recent documents of the Church. So we have to distinguish homosexual or LGBTQ persons from the behavior. The person is not condemned. (The person) is loved and called to holiness, called to sanctification, called to a chaste life.”

“And it doesn't matter if it is heterosexual, homosexual, or some other orientation – we are all called to chaste life. Then, engaging in sinful actions like for example, same-sex sexual acts would be sinful, or so-called homosexual ‘marriages,’ sinful by nature, as is clear in the Catechism.”

“If we pursue these kinds of actions, we endanger our salvation. So the Church's main preoccupation is to lead people to heaven, lead people to salvation. And if they are on the path that will lead them astray, they need to be corrected. And if we fail to do that, then we are also to blame for it and we are participating in this kind of sinful attitude.”

Fr. Roginski, in response to a question about the meaning of the pride flag, said that the flag taken as a whole does not only stand for “inclusivity, acceptance, and diversity,” but, more important, it stands for “attitudes and behaviors and ideology that is contrary to Catholic teaching.” Such behaviors, he noted, include “promotion of homosexual marriages, adoption of children by homosexual people, also homosexual active behavior, engaging in homosexual acts.”

The priest said that flying the pride flag from Catholic schools would mislead people into thinking that the Catholic Church accepts the homosexual lifestyle.

“Most of the Catholics passing by the school and seeing this flag in the school would think that we accept the homosexual lifestyle and what it represents. We cannot do that. We would be a cause of scandal and (would be) misleading people rather than leading them to heaven.”

Fr. Roginski proposed that instead of flying the gay pride flag in the month of June, the Catholic school board should dedicate June to the Sacred Heart of Jesus and teach children about Jesus’ love that is “all-inclusive.”

Asked by one trustee if the pride flag “in itself represents a lifestyle which would, under the Church's doctrine, would be considered sin,” Fr. Roginski agreed.

“When we look at the flag, it comes also to our mind all these things that the LGBTQ community all over the world represents – the pride marches that are immoral in many things that they show that are quite almost close to pornography, which is offensive to every Catholic the way it is presented. We cannot as a Church support these kinds of behaviors. It has to be clearly stated. We are for holiness. We are for the road to heaven. We are for chastity, not for immorality,” he added.

“My concern is that we Catholics are giving a message to the outside world that ultimately we condone the blessing of same-sex unions or ‘marriage,’” she said, noting that the “Church stands firm on its teachings about sex of any kind outside of married life.”

“According to our Church Magisterium, sex is only for married couples to enjoy loving one another with an openness to procreation. This has been true for more than 2,000 years when Christ began His Church on earth. Any form of sex outside of marriage is fornication and a sin, an abuse to the God-given gift of our sexuality. So, like I said before, displaying the pride flag could be telling people something about our Church that isn’t true. Certainly, we want all of our Catholic School Boards to always reflect the teachings of our Church.”

Teresa Pierre, president of Parents as First Educators, said in an email to supporters that the delegates against the flying of the flag “did a superlative job explaining why raising the flag would go against the Catholic faith and responding to questions from the trustees.”

Joe Bissonnette, a Catholic teacher who has been teaching for 25 years at a Catholic board neighboring the Halton Catholic Board, told LifeSiteNews that whatever the HCDSB decides on this matter, his own board will be sure to follow. He said that he would not continue to teach at a Catholic school that flies the pride flag.

“For Catholic schools to fly the pride flag would mean that Catholic schools are subsumed under all that it represents: Lesbian, Gay, Bisexual, Transgendered, Queer and everything else. But the LGBTQ ideology is radically opposed to the Catholic understanding of the human person and sexuality,” Bissonnette said.

“I cannot and I will not teach at a Catholic school that flies the pride flag. To do so would be to forfeit our Catholic identity and to be a counter-witness to the Holy Trinity,” he added.

The HCDSB will meet May 4, when the motion will likely face a vote.