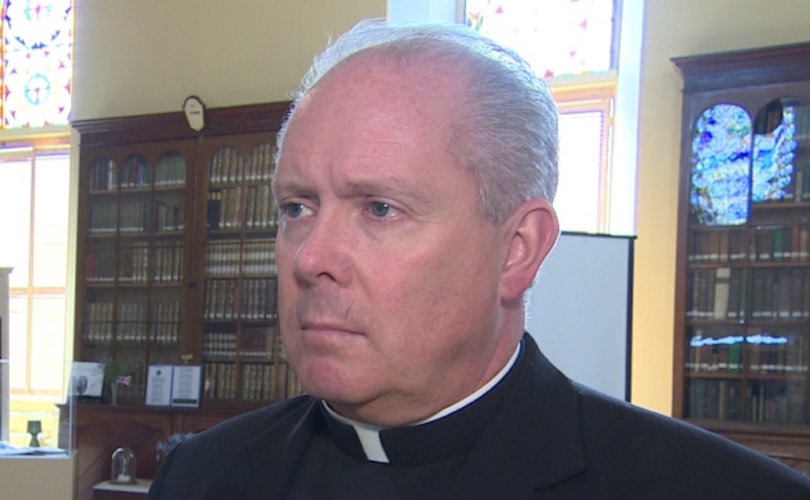 TORBAY, Newfoundland, June 30, 2017 (LifeSiteNews) — A Catholic priest helping to run a gay-Pride ‘multi-faith service’ says that the Holy Spirit could direct the Church under Pope Francis to change its teaching on marriage and sexuality to accept gay “marriage.” And, if the Holy Spirit did so, “it would be wrong to fight against it,” he said.

“It's not like this was a teaching that was established in the time of Christ, or in the first three centuries, or by the Council of Nicea, or even by the Council of Trent,” said Fr. Paul Lundrigan, a pastor in active ministry at Holy Trinity Parish within the Archdiocese of St. John’s, Newfoundland, to LifeSiteNews.

“It was just never considered. It’s only in recent centuries — there were actions taken, there were things that were said — but there was no official teaching written down regarding these issues of sexuality,” he added.

Fr. Lundrigan is part of a committee organizing a gay Pride event that will be taking place next month at a Catholic retreat center run by religious sisters within the archdiocese, reported LifeSiteNews earlier this week. He called the pro-gay service an “opportunity to come together and not teach doctrine or promote one point of view or another, but to listen and to share faith.”

When asked if the event would have any place for the Christian teaching against homosexuality, especially as found in St. Paul’s letter to the Romans — where the Apostle speaks about homosexual acts as “unnatural” and “shameless” — Fr. Lundrigan replied that the passage “is not a clear condemnation of homosexuality.”

“There are some who feel differently about that,” he said, adding that Biblical texts can be interpreted differently depending on the “translation that you use” as well as the “cultural context” in which the passage was written.

The Catholic Church teaches that God created humans as “male and female” and gave them to each other in marriage so they could “increase and multiply.” Sexual attraction and sexual acts between a male and female are specifically created by God for the purpose of procreation. The Catholic Church is therefore logical and consistent when she teaches that homosexual acts are “acts of grave depravity” and “intrinsically disordered” since they are “contrary to the natural law” in that they “close the sexual act to the gift of life.”

And since God did not make a mistake in creating humans as male and female for one another, the Church also teaches that same-sex attraction is “objectively disordered” since God created members of the opposite sex to be attracted to one another for the sake of procreation.

When asked if the Church should change its teaching about homosexual acts being “objectively disordered” and same-sex attraction being “intrinsically disordered,” Fr. Lundrigan replied: “I don’t think that [changing it] is necessarily a bad thing.”

“There are many things that people are questioning in the Church. I think it's a wonderful thing to have a dialogue,” he added.

This is not the first time Fr. Lundrigan has made statements about marriage and sexuality that do not align with what the Church teaches.

In 2003, Fr. Lundrigan was reprimanded by then-Archbishop Brendan O'Brien after criticizing in a Sunday sermon the Church's teaching on marriage being between a male and a female, not between two members of the same-sex. He told CBC News at that time that he found it “embarrassing” to hear Canadian bishops speaking out against the government’s homosexual “marriage” bill that he said would “allow people to get on with their lives.”

“So, while I cannot perform same-sex marriages, neither can I support the institution of the Roman Catholic Church in its efforts to suppress those who wish to live a more open, honest and healthier lifestyle,” he said at that time.