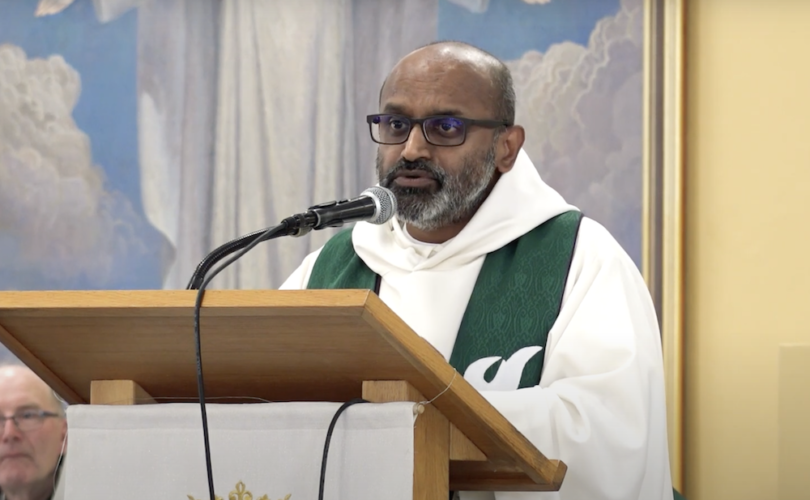 (LifeSiteNews) – In strong comments directed against “modern heretics” who push for changes in the Church’s morals in the name of being “synodal” and “listening,” Father Leon Pereira condemned the subtlety of priests and bishops who deny Church teaching while claiming to affirm it and who, he said, then “blame the Holy Spirit for all their errors.”

Pereira is a Dominican from England and chaplain to the English-speaking pilgrims in Medjugorje, Bosnia and Herzegovina. The remarks were given in a homily broadcast by Mary TV, based in Medjugorje. The alleged apparitions of the Marian pilgrimage site have never been officially approved by the Church. In his homily, Pereira compared the heresies that have emerged in the synodal reports of various countries to the lifeless sterility of contraception.

“Heresy does not breed a new generation,” the priest said, “because heresy is contracepted and sterilized. Therefore, it seeks to propagate itself by commandeering and imposing itself on others like a virus. We see much of this in the pre-synodal reports of certain countries. They clamor for changes to doctrines and morals; they claim holiness is an ideal rather than a goal. They seek to accompany, by which they mean keeping people exactly where they are. What is sinful is no longer called sin. We are reassured that hell is not eternal or that it is empty. Holiness is not sought. We are fine as we are.”

Drawing attention to a letter from the youth of Ireland affirming their love for Catholic doctrine and morals, and the derision this drew from members of the Church’s hierarchy, Pereira called out the hypocrisy:

“So the truth comes out. We keep being told all are welcome, except, of course, when you’re not. We are told the Church must listen, but we don’t want to listen to you.”

The priest then denounced in no uncertain terms the hypocrisy of claiming to uphold Church teaching while in the next instant denying it in action and all the while proclaiming to be led by the Holy Spirit.

“You see,” he said, “the heretics of old at least had some courage they were open about what they were denying. The modern heretics are more subtle. They will say, oh yes, we agree with Saint John Paul II, we reaffirm Church teaching; and then in the next instant they proceed to deny it in their actions. And they blame the Holy Spirit for all their errors. ‘We are a listening Church, and we must keep walking forwards.’ Yes, listening to whom? And where are you walking to?”

“O Brave new Church that hath such sycophants in it!”

“These illusions, these errors arise when we treat God as absent. Everything then depends on us, and we hijack God’s Word for the sake of our passing whims. When we fail to love people enough and properly, our error manifests. How? By lying to them and blessing their disordered unions, by confirming them in adultery and fornication, by affirming their grave errors like abortion and rewarding them with communion without repentance.”

— Article continues below Petition —
Demand that the Archdiocese of Indianapolis let Kim Zember speak!
Show Petition Text
5015 have signed the petition.
Let's get to 6000!
Thank you for signing this petition!
Add your signature:
Show Petition Text

Calling for a genuine charity that makes known the hard truth, Pereira condemned the refusal to preach the Gospel as a failure to love souls enough to desire their eternal salvation and a failure to be authentically pastoral.

“It is the failure to love people’s souls and a willingness to risk their eternal salvation. And all, why? For the sake of being inclusive and nice, for the sake of making myself popular. Aren’t I lovely! It is the grievous failure to be authentically pastoral and genuinely loving.”