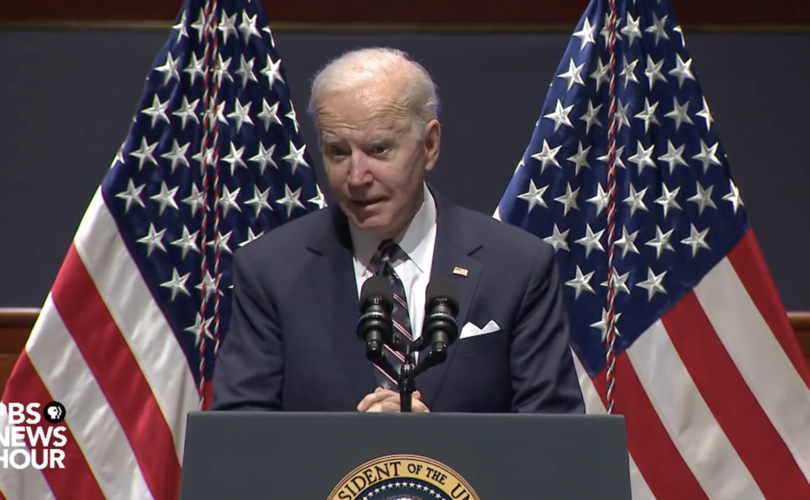 Pro-life activist Fr. Frank Pavone suggested that Biden had no business attending the annual event because of his virulent support for abortion.

“I do not think Joe Biden should show up for today’s Nat’l Prayer Breakfast,” began a tweet by Fr.  Pavone, national director of Priests for Life. “It is an offense to God to worship Him while advancing the direct killing of babies by abortion.”

“When you lift up your hands in prayer, I will not listen; your hands are filled with blood,” he added, quoting Isaiah 1:15.

I do not think Joe Biden should show up for today’s Nat’l Prayer Breakfast.

It is an offense to #God to worship Him while advancing the direct killing of babies by #abortion.

“When you lift up your hands in prayer, I will not listen; your hands are filled with blood” (Is. 1:15)

During 20 minutes of meandering, the president spoke of the importance of having faith in the United States of America, but not of faith in God.

He also stressed the importance of an ambiguous notion of unity, while failing to address the significant erosion of religious liberty that has taken place under Democratic leadership.

In 2020, President Trump made robust declarations about the importance of religious liberty, the sanctity of human life, and the role of faith and prayer.

“To protect faith communities, I have taken historic action to defend religious liberty, including the constitutional right to pray in public schools,” continued Trump, sparking an enthusiastic round of applause.

“We’re upholding the sanctity of life,” he said, “and we’re pursuing medical breakthroughs to save premature babies because every child is a sacred gift from God.”

“Faith keeps us free. Prayer makes us strong,” he said. “And God alone is the author of life and the giver of grace.”

“We’re restoring hope and spreading faith. We’re helping citizens of every background take part in the great rebuilding of our nation,” he said. “We’re declaring that America will always shine as a land of liberty and a light unto all nations of the world.”

Weeks before the 2020 presidential election, Fr. Stephen Imbarrato, an activist pro-life Catholic priest, a regular on EWTN, and a member of Red Rose Rescues, told LifeSiteNews that Biden’s actions have resulted in “multiple grave scandals against our Catholic faith.”

“Let’s look at how many ways Biden violates his Catholic faith,” said Imbarrato, and provided a list: