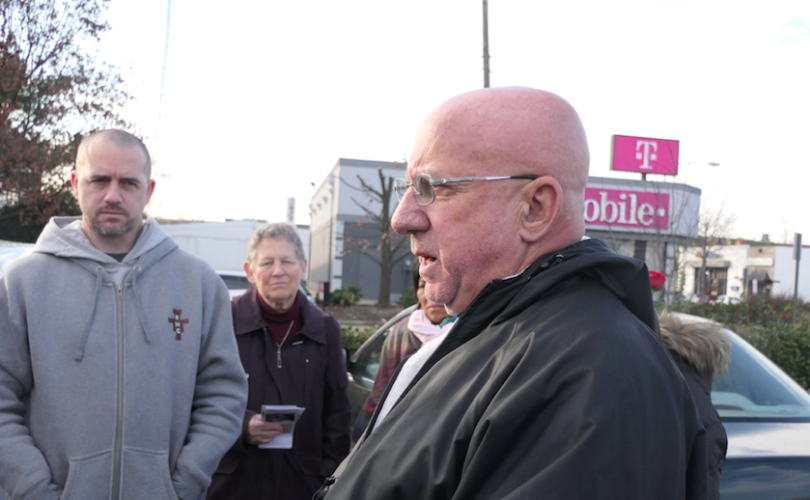 WASHINGTON, D.C., December 4, 2017 (LifeSiteNews) – The Catholic priest who was arrested ministering to women inside an abortion center Saturday said he hopes this latest “Red Rose Rescue” will “motivate more people” to “reflect on what is a minimally proportional response to state-sanctioned mass murder of the unborn.”

Father Stephen Imbarrato of Priests for Life spoke with LifeSiteNews before and after his arrest inside a Washington, D.C. abortion facility operated by Steven Bringham at 6323 Georgia Ave NW, Suite 210. Imbarrato, along with Julia Haag and Joan McKee, entered the abortion center on Saturday to give red roses to abortion-minded moms and encourage them to choose life.

Police allowed the three activists to stay inside the building’s common areas and hallways talking to the women. They only arrested them when they entered the abortion facility waiting room.

There were so many women there for abortions that they were spilling out into the hallway.

Bringham is one of the country’s most notorious abortionists.

When Maryland police raided a “secret clinic” operated by Bringham, they discovered a freezer full of aborted babies. One was as old as 36 weeks. Bringham wasn’t licensed to commit abortions in Maryland.

As Cheryl Sullenger of Operation Rescue wrote at the time:

Because Brigham was never licensed to practice in Maryland, his participation in the abortions in Elkton was a violation of a criminal statute related to the unlicensed practice of medicine. The Cecil County State Attorney’s office determined that the deaths of the viable babies discovered in Brigham’s filthy freezer qualified for murder charges, since they were killed during the commission of a crime.

Imbarrato said that the police letting them counsel women inside the building, which is open to the general public, showed that in some cases the “sidewalk” may extend further than people think it does. He also said there are ways of being involved with the Red Rose Rescues that don’t involve risking arrest.

The priest, who himself is post-abortive, said the Red Rose Rescue was a “manifestation” of the country’s need for President Trump to issue an executive order declaring that the pre-born in the womb are human persons.

“I truly believe President Trump will issue such an order in 2018,” said Imbarrato. “I ask everyone reading this to contact the President and likewise encourage him to declare babies in the womb constitutionally protected persons from fertilization.”

“As a Catholic priest who is a great grandpa of a four-month old-baby, a grandfather of four, an adoptive father of a son who committed suicide three years ago, and the father of two babies who died from abortion decades ago, I cherish all life as unique, precious, and unrepeatable from fertilization,” said Imbarrato.

“Being involved in the Red Rose Rescue movement is something I feel compelled to do in good conscience after much prayer and discernment,” he explained. He said he hopes “preborn child killing” will be brought “to an end very quickly.”

Linda Mueller, a mother of six who was arrested at the Alexandria, Virginia Red Rose Rescue on Saturday morning, told LifeSiteNews the experience was “incredible.”

Mueller “had read about Mary Wagner, and I thought it was Canada years ago” and that nothing similar was taking place in the United States.

“I’ve kind of been itching for something real to do for years,” she said. She saw Imbarrato’s Facebook posts about the rescues and showed her husband.

“And he’s like ‘honey, go for it,’” she recalled. She said the treatment she and others received from the police was “excellent.”

Imbarrato, McKee, and Haag were all participants in the September rescue.

Lauren Handy, the 24-year-old who heads Mercy Missions, participated in Saturday’s Alexandria rescue along with Mueller and Michael Webb.

The trio will appear in court for this on December 11.

The “D.C. three” of Imbarrato, McKee, and Haag are scheduled to appear for arraignment on December 28, the Feast Day of the Holy Innocents.

After their arrest, the trio was transferred from the precinct's holding cells to a jail. They originally thought they’d have to wait until Monday morning for arraignment but were let out early Sunday morning.

Imbarrato told LifeSiteNews during their transfer to the jail, the pro-life activists prayed the rosary.

“We got there about midnight, just as Advent was starting,” he said.