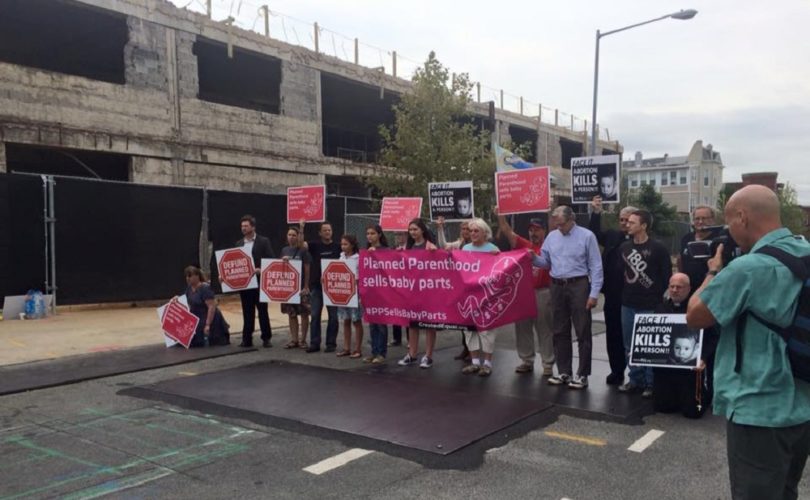 Planned Parenthood is building a mega-abortion facility at 1225 Fourth Street NE in Washington, D.C. The nation's largest abortion business is replacing its old 16th Street building, where pro-lifers protested and prayed for the tens of thousands of babies aborted there.

Priests for Life's Fr. Stephen Imbarrato visited the construction site with a pro-life friend, Larry Cirignano, “to show how lonely and unattended this future killing center is on many days.” Fr. Stephen posted a picture of the two of them on Facebook.

Then, Fr. Stephen posted, a man approached them. “He was there looking to be a flooring subcontractor at the site. When Larry told him it was a Planned Parenthood killing center, he said, 'I can't have anything to do with that.' He then left!”

In tough economic times, the subcontractor's refusal to work on an abortion business is a testament of faith and loyalty to Christ.

Fr. Stephen's Facebook post goes on: “We … thanked him for standing up for the babies! This shows what can happen if we just show up at the killing sites even for a minute! Jesus will bless it!”

Fr. Stephen told LifeSiteNews that the new Planned Parenthood “is scheduled to open probably in late spring, and it will be the flagship Planned Parenthood in the region.” He said a prayer vigil and protest will be held at the construction site on January 21, from 9 am 'til noon, and many pro-life leaders will attend, including Fr. Frank Pavone, David Daleiden, Mark Harrington, Monica Miller, Lila Rose, and others.

“The problem is, there is not a sustained local presence at this site,” Fr. Stephen told LifeSiteNews. “I came into town to help Larry Cirignano and others bring awareness to those who work and live in the D.C. area about this Planned Parenthood.”

“I also believe that proper attention and protest should be given to all those who are cooperating in the building of this mega-Planned Parenthood, especially those of the Catholic faith,” Fr. Stephen said. “A large Catholic contractor, who has profited doing work for local Catholic entities, should not be allowed to build this child-killing center without being exposed and called to task.”

Pizzano was even a member of a Catholic school's Board of Governors and was honored by them for founding a charity.

“This is a scandal that a Catholic contractor is building this place where innocent babies will die,” Fr. Stephen told LifeSiteNews.

Here is a partial list of companies that do business with Pizzano.

Fr. Stephen concluded to LifeSiteNews, “It is my hope that the prayer vigil and protest this coming Thursday, January 21, will be the beginning of a sustained peaceful, prayerful presence at this D.C. location and will cause contractors like Pizzano to stop cooperating with the abortion industry.”

In 2014, New Orleans Archbishop Gregory Aymond wrote that Catholic leaders are “obliged to remind every person and organization involved in the acquisition, preparation and construction of … any abortion facility that they are cooperating with the evil that will take place there.”

Archbishop Aymond said his diocese's churches, schools, senior living apartments, and nursing homes will not do business “with any person or organization that participates in actions that are essential to making [an] abortion facility a reality.”

Aymond concluded, “There is no justification, including economic hardship, that will make a direct or indirect relationship with Planned Parenthood or any abortion provider acceptable. Additionally, affiliation or support of Planned Parenthood by Catholics is a matter of serious scandal.”

A local D.C. charter school, Two Rivers, has two buildings on the same block as the Planned Parenthood mega-abortion center being constructed. According to Fr. Stephen, the school has intimated a lawsuit against several of the local pro-lifers who are regularly praying there, including Larry Cirignano.