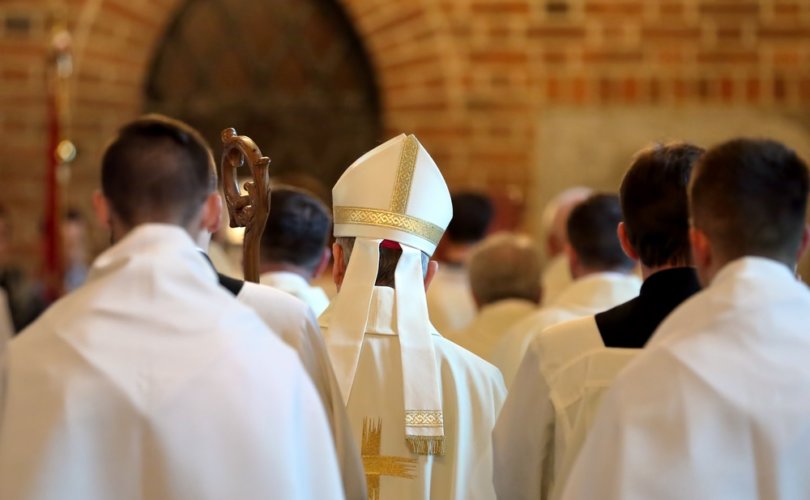 TAMPA, Florida, August 3, 2018 (LifeSiteNews) – “Evil” homosexual bishops set out to “punish, humiliate and blackmail” decent, God-fearing priests if these threaten to blow the whistle on the gay “mafia” within the Roman Catholic church, says a parish priest.

In the bulletin and on the website of the Epiphany of Our Lord Roman Catholic Church, Father Edwin Palka does not mince words about the terrible extent of the damage done by what he calls the gay “Lavender Mafia” within the church. His writing offers light on why the sexual abuse crisis within the U.S. church has continued to rage unabated for decades.

“Many people still don’t (I believe most priests still don’t) understand just how evil the active homosexual or homosexual activist … priests and bishops are,” writes the pastor of that Tampa, Florida parish.

“Not understanding the extent of their depravity and wrongly thinking that they are simply ‘normal’ men who just struggle with their sexual desires and sometimes might fail to remain chaste but are really, truly repentant when it happens and strive to ‘confess my sins, do penance and amend my life, amen’, they cannot possibly grasp the hellish depths to which … [homosexual activist] … clergy will go to persecute, lambaste, punish, humiliate and blackmail anyone who stands in their way or threatens their way of life,” writes Palka.

Estimates of the number of priests who are homosexual vary widely. In one article, an associate professor of religious studies at John Carroll University warned as far back as 16 years ago that studies suggested the percentage of Catholic priests who were homosexual could be as high as 50 per cent. That’s roughly 16 times more the percentage of gay men in the general population.

But that astoundingly high estimate of homosexuality in the clergy is perfectly in line with the revelations of Father Dariusz Oko, a priest who became world-famous in 2013 for his essay on clerical homosexuality, With the Pope Against Homoheresy.

In that essay, Oko alleged homosexual priests and bishops had abused seminarians, teenagers, and children and that there was a gay mafia of powerful clerics protecting these men.

“According to reliable estimates, it is estimated that about 30 to 40 per cent of priests and 40 to 50 per cent of bishops in the USA have homosexual inclinations,” Oko told LifeSiteNews in an interview last month.

That gay mafia has a tremendous and terrible impact on good priests who teach the truth about homosexuality as revealed by the church.

And the gay mafia’s power over good priests starts in seminary school, according to Palka.

These students who will one day perhaps become priests are asked to provide a great deal of personal detail, including their history with chastity, sexual activity, criminal undertakings, and worst fears about the challenges of living out their vows or promises.

“His file grows thicker the longer he remains in the seminary and it continues to grow after ordination, and includes self-revealed and other-revealed (from formation directors, vocation directors, letters from parishioners, etc.) information regarding his struggles, mental issues, physical problems, and moral failings before, during and after formation, any perceived ‘hostility toward women’ or ‘rigidity’ or ‘uber Catholicism’ or ‘hard preaching’ and many more such things,” writes Palka.

None of this information is protected by the seal of the confessional and it follows this man throughout his time in the seminary and afterwards if he becomes ordained into the priesthood. The purpose of this file of information is to help the seminarian and priest grow and meet the challenges of his vocation.

“This file is always meant to help him so that by working with his spiritual director he can improve in every aspect of his life, so that he can overcome fears and failings, so that he has a benchmark by which to gauge his improvements in holiness and competence,” writes Palka. “It is also meant to help his bishop and any of his future bishops understand the priest, to figure out where to place him on assignment or which assignment to keep him away from for his own good.”

But that information can also be used for nefarious purposes by evil bishops.

Using two fictitious scenarios, Palka shows how priests can be set up.

In the first, a priest who struggles with his own homosexual urges to remain chaste and live out his vows in obedience to the church can be manipulated by a homosexual activist bishop and set up to fail.

“Suppose a priest’s file reveals that as a teen he was sexually abused by an adult male. As a result of this formative abuse, he struggled with homosexual desires as an adolescent and into his early adulthood but always remained chaste,” writes Palka. “Once ordained as a priest he spoke out fervently against the acceptance and promotion and legalization of homosexual activity and other sexual sins.

“His … [homosexual activist] … bishop, knowing his past, makes him the Boy Scout chaplain where he will be working closely with the bishop’s handpicked and openly-active homosexual lay diocesan Scout leaders, hoping and even encouraging (vicariously, through his minions) him to finally fall to his boyhood abuse-induced homosexual desires and sexually abuse one or more of the Scouts,” writes Palka.

But it’s not just homosexual priests who can be manipulated in this way, notes Palka.

A heterosexual priest who was sexually active before being ordained and who dares to speak out against homosexuality could similarly be assigned to be the chaplain of a girls’ high school in the hope he would succumb to temptation, writes Palka.

“Think this is far fetched? Don’t be fooled,” he warns.

Although he declined to be interviewed by LifeSiteNews, insisting he prefers to collect his thoughts and express them in writing in the parish bulletin, Palka did agree online the gay mafia in the church is not at all above exploiting the seal of the confessional to bind decent priests into silence and even to pick up other priests to commit homosexual acts with them.

“These men know the way the church works and they use that knowledge for their own evil ends … They have embraced evil,” he writes. “There is a huge difference between a weak man striving for holiness and a man who has sold his soul to the devil. And oftentimes the former appears to be ‘bad’ because he admits his sin while the latter appears ‘nice’ because he is as adept at lying as his father, the prince of lies, is.

“That type of priest will also use the confessional to see if he can pick up a new ‘date’ by seeing how his confessor reacts to his revealed (not repented) sins,” writes Palka.

The pastor of the Epiphany of Our Lord parish has promised to publish another article on Saturday detailing more of the destructive uses to which evil bishops put the personal information offered up by seminarians and priests, showing how even ex-priests are not safe from this plotting.

Cardinal McCarrick and the gay mafia: corruption of clergy now rivals the age of the Borgias

McCarrick is ‘tip of the iceberg’: Polish priest who warned of gay bishops 5 years ago