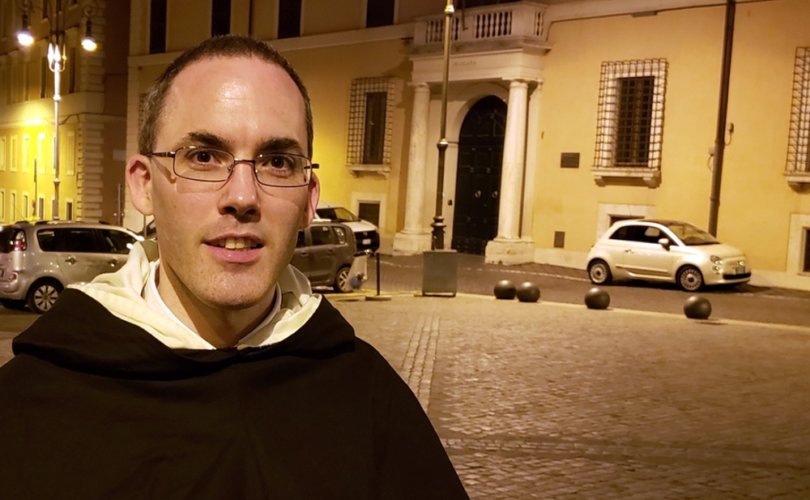 ROME, May 17, 2018 (LifeSiteNews) – A “distorted” view of conscience in the Church today has led many Catholics to believe they can commit adultery, fornication, homosexual acts, and other mortal sins in ‘good conscience’ while still remaining in God’s grace, a Catholic priest and Thomistic scholar indicated today at a talk in Rome.

Fr Thomas Crean, OP, spoke at the Roman Life Forum today at the Pontifical University of St. Thomas Aquinas (the Angelicum) to explain St. Thomas Aquinas’ teaching on conscience and to show how “certain prelates and theologians” within the Church are distorting that teaching in such a way as to allow men to follow their own sinful inclinations instead of God’s laws. The full paper can be found below.

Crean explained that conscience truly understood is not an “authority, in the sense of something which authorises me to act,” but a judgment made by our intellects about the goodness or evil of actions we have done, are doing, or are thinking of doing.

He criticized Cardinal Blase Cupich's “distorted view” that conscience, in the words of the Cardinal, represents “God’s personal guidance for the particularities of [human] lives.”

Crean stressed how St. Thomas holds that judgments of conscience can err, and that it is the duty of each person to form his conscience according to truth.

“What has authority are God, and the good; conscience only has authority to the extent that it adheres to God and to the good; that is to say, insofar as it judges truly,” he said.

During his talk, Crean appeared to indirectly address an understanding of conscience as found in Pope Francis’ 2016 exhortation Amoris Laetitia that contradicts St. Thomas’ teaching on conscience.

Amoris Laetitia suggests in passage 303 that conscience can discern that God Himself asks less than what He commands.

“Conscience can do more than recognize that a given situation does not correspond objectively to the overall demands of the Gospel,” the exhortation states. “It can also recognize with sincerity and honesty what for now is the most generous response which can be given to God, and come to see with a certain moral security that it is what God himself is asking amid the concrete complexity of one’s limits, while yet not fully the objective ideal,” the document states.

Passages such as these have been used by prelates within the Church to lend legitimacy to a so-called second ‘marriage’ entered into by civilly divorced Catholics. The exhortation has also been interpreted as allowing Catholics who are objectively committing adultery to receive Holy Communion, contrary to previous Catholic teaching.

In his talk, Crean addresses the talking points of “certain prelates and theologians” who attempt to assure those who commit various intrinsically evil acts — including adultery, homosexuality, fornication, cohabitation — that they remain in the state of grace by appealing to a distorted sense of conscience.

He explained how Catholics cannot be invincibly ignorant of the divine commandments forbidding intrinsically evil acts such that they impute no guilt when acting contrary to them. And even if it were possible that a Catholic did not know the commandments, such ignorance would itself be a “mortal sin, since he had been gravely negligent in ascertaining what law of God was.”

“We see here, it seems to me, a certain danger in the maxim, often repeated, that ‘full knowledge and consent’ are necessary conditions for mortal sin,” said Crean. “It is not in fact necessary to know that something is a mortal sin in order to incur the guilt of mortal sin by committing it. St Thomas’s consistent position is that the only kind of lack of awareness of God’s commandments which can excuse from mortal sin someone who breaks them is a lack of awareness due to madness or mental handicap,” he added.

Crean also used Thomas’s teaching to criticize the view that the Church’s sexual teaching to be an “ideal” that should be aimed at, but not necessarily lived out.

“Someone who thinks that what he may still call ‘divine law’ is in fact only a kind of ideal is therefore in the position considered in the first hypothesis, i.e. such a person is simply ignorant of the divine law about intrinsically evil acts, an ignorance which St Thomas holds to be gravely sinful,” he said.

He also took aim at the view that one may break a divine commandment without committing mortal sin if an alternative course seemed to him to involve a worse sin. Such a position is advanced in Amoris Laetitia.

“It is impossible for a person so to entangle his life that there is no longer any good course left for him to take, and that he must break God’s law in one way or another,” said Crean. “To claim that this is possible is to say that God’s law will sometimes make incompatible demands on us, which would be to blaspheme against divine wisdom,” he added.

Crean concluded by stating that it is “not possible to combine the state of grace and intrinsically evil actions.”

“While it is possible for men to be ignorant of divine law and the intrinsic evil of certain kinds of action, such ignorance does not excuse them from mortal sin, since even where bad education or a corrupt ambient culture exist as mitigating factors, their very ignorance is still itself a mortal sin: a negligence, St Thomas says, to learn those things whereby we can safeguard ourselves in the love of God,” he said.

The author of God is No Delusion: a Refutation of Richard Dawkins, Fr Crean was one of the first signatories of the Filial Correction.