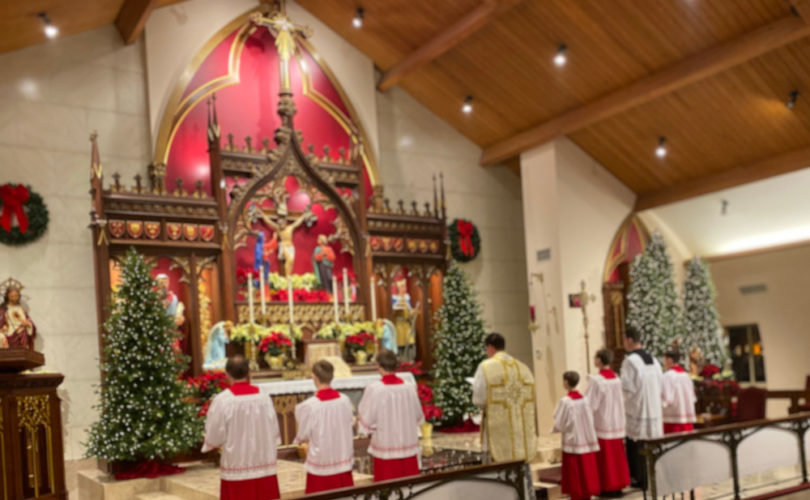 O’FALLON, Missouri, May 19, 2021 (LifeSiteNews) — A priest who brought beautiful art and liturgy to his parish has been forced into retirement, allegedly for disobedience. But his parishioners believe that both they and their tradition-loving priest are being punished for celebrating mask-free Masses.

Fr. Ray Hager, now 60, was interviewed by one of the Archdiocese of St. Louis’ own periodicals, the St. Louis Review, in 2018, after he oversaw the renovation of the sanctuary of St. Barnabas the Apostle Catholic Church in O’Fallon, Missouri. As the magazine noted, Auxiliary Bishop Mark Rivituso consecrated the altar, and it had been 37 years since the church had had a “major renovation.”

Now, Bishop Rivituso mentioned the beautification of the church as part of a “pattern of failing to comply with archdiocesan administrative policies and directives from the Office of the Bishop.”

“This includes decisions regarding changes to the infrastructure of St. Barnabas Parish — some of which were made without seeking proper approvals — and some of which were made in direct contrast to direction given by both Archbishop-Emeritus Robert Carlson and most recently Archbishop Rozanski,” Rivituso wrote in his April 20, 2021, letter to the St. Barnabas parishioners.

Fr. Hager has lived at the parish with his 94-year-old mother. When in March Archbishop Rozanski, 63, gave the priest the choice to be transferred to another parish — without his mother — or to retire, Fr. Hager picked retirement.

However, not all of his former flock are convinced that there is just cause for the priest’s removal. Parishioner Jason Bolte told LifeSiteNews that he believes the real reason Hager was removed was because he carried on celebrating Mass without overly-restrictive COVID-19 measures.

“Fr. Hager never had the pews roped off,” Bolte said. “He didn’t force masks. He actually installed a dispenser that sprayed out holy water when you waved your hand underneath it. To a certain extent, a lot of us feel like they’re punishing us because of that.”

Bolte said he and others felt that because they were in a sanctuary, “in the presence of God,” they didn’t “need to worry about these things.”

The parishioner said that there were no “mask mandates” in St. Charles County, though there was “a huge one” in the city of St. Louis. “The Archdiocese of St. Louis covers a very wide spread,” he explained.

However, there appears to have been an ecclesiastical mask mandate for the entire diocese. According to a recent message from Msgr. James P. Callahan of St. Louis’ St. Joseph Parish, it has been relaxed for Mass-attending Catholics who have been “fully vaccinated.”

The monsignor encouraged his flock to get vaccinated, promising that the abortion-tainted jab “will end COVID-19.”

Ryan Murphy, the director of music and liturgy at St. Barnabas, reported on Facebook that Fr. Hager was told by the then-Archbishop Robert Carlson in 2013 that the church would be shut in about five years unless he found a reason for the diocese to keep it open. In 2015, the priest began to celebrate a Missa Cantata — a sung traditional Latin Mass. Average Mass attendance in the parish grew from 99 in 2017 to 165 in 2021, despite the coronavirus crisis.

More importantly, for the first time in seven years, the parish received converts into the Catholic Church. Murphy reported that all five of them were under 30 and regularly attended the traditional Latin Mass.

“Based on these facts, Fr. Hager made the decision to celebrate our Pascal Triduum liturgies according to the 1962 missal for the first time in over 50 years,” he wrote.

In an email to Murphy, Msgr. Dennis Stehly, the Vicar General for the Archdiocese, stated that Fr. Hager had been discouraged from his renovations of St. Barnabas Church.

According to the music director, Stehly wrote:

Fr. Hager was told directly not to make any changes in the church without the express permission of Archbishop Rozanski. In addition, he was told that before any changes are to be made, he must consult with the Office of Worship. He did neither. He was told he could hang two [stained glass] windows back lit for viewing. That was it … [Previously,] Fr. Hager was told directly by then Archbishop Carlson that he was not to pursue the purchase of the stained-glass windows in the first place. Fr. Hager went ahead anyway and bought the windows.

The St. Louis Review reported that the renovations, which included “a new wooden altar, statues, reredos, communion rail, ambo, side shrines and new marble flooring,” were “made possible in part by help from parishioners and donations.”

Parishioners are worried that the parish itself will now be closed down, but Ryan Murphy assured them that, although “Archbishop Rozanski’s first inclination was to close the parish,” he had given them permission to keep the Traditional Latin Mass going. By April 10, Murphy had found priests to say the Latin Mass for all the Sundays of May and June, and for July 11.

“Please pray for my ongoing efforts to find priests for our Sunday 10:00 AM TLM and that we can add other Masses to our schedule as soon as possible,” he wrote.

Fr. Hager declined to give an interview to LifeSiteNews, but Murphy reproduced a letter that the priest wrote to his parishioners, including the following sentiments:

My good and faithful flock, please do not be bitter or angry. Remember the good times and these good people that are your parish family. You have touched me and through knowing all of you I have become a better priest. We cannot go backwards in life. Sometimes we wish we could have a redo of sorts and sometimes that is impossible to do. Nothing can change what has been put into motion and I am asking that you accept it with kindness and good will. Sometimes we are given crosses that seem impossible to bear at the time and we cannot understand God’s plan. We must just pick them up and Follow Him.

This little parish is truly a piece of Heaven on earth. If I may leave you with one final thought today, “Do everything you do in life for the Glory of God!” In the end that is all that really matters. May Our Dear Lord bless you and keep you close to Him, His Blessed Mother, and St. Joseph throughout your lives.

LifeSiteNews reached out to the Archdiocese of St. Louis for comment but did not receive a response.