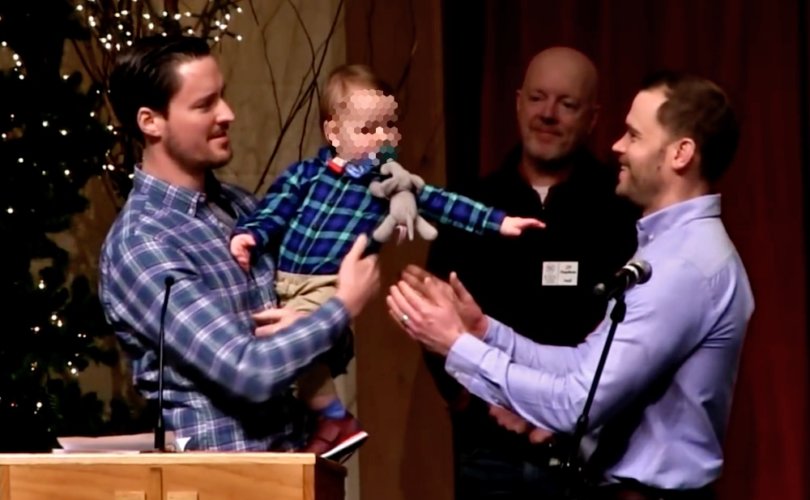 Update Jan. 18, 2019: St. Joan of Arc pulled the video this morning of the two homosexual men giving their pre-Mass presentation. We are now using a source for the video provided by Complicit Clergy.

MINNEAPOLIS, MN, January 17, 2019 (LifeSiteNews) – A parish priest in Minnesota gave the pulpit to a same-sex “married” couple in a pre-Mass presentation last Sunday, allowing the two men to showcase their homosexual partnership, which included a child whom they said was conceived by IVF and carried to term via surrogacy.

Alan Nachtigal and Blake Wilson were legally “married” to each other in Minneapolis in September 2014. On January 13, 2019, the two men were introduced as speakers to the St. Joan of Arc Catholic Community by parish staffer “JP” before the day’s Sunday Mass. St. Joan of Arc parish, where Fr. Jim DeBruycker is pastor and Fr. James Cassidy is parochial vicar, often features pre-Mass presentations on Sundays, accompanied by art and music.

The homosexual men had with them one-year-old Cohen, a child whom they said was conceived by IVF (in vitro fertilization) and who was brought to term by means of a surrogate mother.

A video of their presentation was published on YouTube via the parish website and was introduced by the description: “On the Baptism of our Lord Sunday, parishioners Alan Nachtigal and Blake Wilson share their journey to bring their son, Cohen, into the Catholic faith through Baptism.”

The congregation laughed and applauded Wilson’s take on a LGBT cliché when he broke the ice by saying, “Just like Jesus, Cohen also had two dads, and He turned out pretty great.”

The Archbishop of Saint Paul and Minneapolis responded swiftly to LifeSiteNews for a request for a statement.

“I have reviewed the video of the presentation made before Mass at the parish of St. Joan of Arc in Minneapolis by a same-sex couple about the decision to baptize their child, conceived through in-vitro fertilization,” Archbishop Bernard Hebda told LifeSiteNews via email.

“I am deeply concerned that the presentation would have incorrectly suggested to those in attendance that the Catholic Church approves of same-sex marriage, in vitro fertilization, or surrogacy,” he continued.

Basing itself on Sacred Scripture, the Church teaches that homosexual acts are “acts of grave depravity” and are “intrinsically disordered” since they are “contrary to the natural law” in that they “close the sexual act to the gift of life.”

The Congregation for the Doctrine of the Faith warned in a 2003 document that the Church’s call for “respect, compassion and sensitivity” for persons with same-sex attraction can never lead to approval of their actions or partnerships.

The Church also teaches about the grave immorality of in vitro fertilization and the exploitation of women as surrogates.

Hebda, who is in Washington D.C. for the March for Life, said that he expects the “fullness” of the Catholic faith to be proclaimed in his diocese.

“While I challenge our pastors and laity to be serious about accompanying all who come to the Church for an encounter with Christ, I also expect our parishes to be places where the fullness of our faith is boldly proclaimed,” he said.

“The Archdiocese has already contacted the pastor of the parish in question and I will be meeting with him and parish leadership to discuss this situation when I return,” he added.

During the presentation, the two men said that they had not expected to baptize any babies they might someday “have.” They related how they felt welcomed and accepted by St. Joan of Arc parish and decided to start attending services.

“It was a different service than what we were used to,” Nachtigal said. “…I know my mom likes John Lennon, but I don’t know what she thought of singing ‘Imagine’ during church.” One of the verses of the song asks listeners to imagine “there's no heaven” and a world with “no religion.”

While the two men attempted to become parents through IVF and the use of a surrogate, “faith” led them back to St. Joan of Arc, they said, where they saw a “Lesbian couple and their children doing the prayer offering.” This led them to decide the church community was their spiritual home. Wilson observed that the topics regularly discussed at St Joan of Arc, like “Equality”, really resonate with them.

Wilson spoke in frank detail about their attempts to have a child without any reference to the Roman Catholic Church’s absolute ban on in vitro fertilization and the exploitation of women as surrogates. Cohen was conceived on the men’s fourth attempt at IVF. Both men spoke, without embarrassment, of having been “pregnant” with the child carried by the never-named woman.

After the seven-minute presentation, in which Wilson and Nachtigal praised the parish community for giving them a sense of home, love, and acceptance, the congregation gave them a standing ovation as the cantor sang “Come Be Baptized”.

New Ways Ministries, a group which seeks to change Catholic doctrine on sexuality, has endorsed St. Joan of Arc as a “LGBT-friendly” community, meaning that it has made a “public display of welcome for LGBT people.” St. Joan of Arc has been the flashpoint of many controversies in the Archdiocese of Saint Paul and Minneapolis regarding ministry to people with same-sex attractions. In 2008, for example, there was a scandal when Bishop Nienstedt told the community it could not have a Gay Pride prayer service. A commitment to LGBT “rights” was fostered in the community by the late Father Harvey Egan, who credited feminist Gloria Steinem for helping him develop the parish.

This is not the first time Nachtigal has trotted out the child Cohen in public. After giving the then-unborn child the initials “CKNW”, he contacted CKNW radio station to inform them. After “CKNW the Kid” was born, Alan gave an interview to “The Lynda Steele Show”.