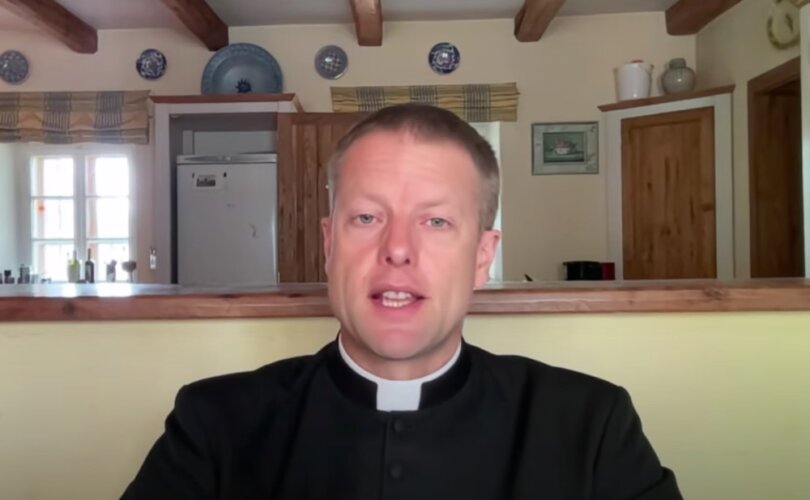 (LifeSiteNews) – An English priest, known for his forthright analysis of the ecclesial and political climate, has encouraged Catholics by outlining how “globalists and satanists” cannot defeat the “indestructible” traditional Mass.

Father James Mawdsley made his stirring address at a recent event hosted by the Corpus Christi for Unity and Peace organization.

While highlighting numerous crises affecting both the Church and society at large, Mawdsley reassured those assembled that “the traditional Mass is indestructible. I mean, the fullest way to worship God. It will reach the end of history alive.”

The priest presented three reasons as to why the traditional Mass “is indestructible,” based on God, on the part of those who love God, and on the self-destructive nature of those who oppose God.

“God has laid this Tradition into creation history,” declared Mawdsley, adding that as Padre Pio observed, it “would be easier for the world to survive without the sun than to do without the holy sacrifice of the Mass.” Just as scientists cannot alter the makeup of the universe, “it is equally impossible to eradicate Tradition,” he said.

Noting how man is created to worship God, the priest added that “it’s the purpose of the universe that we find our union in God through this worship, and it’s always been central to human history.” “So the globalists and satanists are smashing their own head against the wall” in opposing Tradition, he added.

God has orchestrated the Mass, he added, and “if that’s God’s plan, it’s lunacy to think you can overcome Him. This is the purpose God has given to the universe.”

‘Those who love God will seek the traditional Mass’

Presenting his second reason, Father Mawdsley stated that there is a particular link between those seeking God and the traditional Mass: “Those who love God will seek the traditional Latin Mass out and it is the strongest force in society.”

Because any human being who searches for meaning, for being, for life, for God, will be led to the traditional Mass or another apostolic form of worship. It is unmatched for beauty, for goodness, for truth, and for unity. Unity, which is ultimately in Corpus Christi, the body of Christ.

He described the Roman Missal as being “like the DNA of our worship. It has the whole code there, and everything else that happens will just grow around it.”

While man is unable to fully comprehend the nature of God, Mawdsley noted that man can approach Him through appreciating “beauty, goodness, truth and unity.” All of these aspects are present to abidance in the traditional Mass, he continued.

Mawdsley – formerly of the Priestly Fraternity of St. Peter (FSSP) – affirmed that “the quest for the transcendentals bring one to the traditional Latin mass. And here it’s limitless, limitless. It really transcends how close we can go to God.”

— Article continues below Petition —
Demand that the Archdiocese of Indianapolis let Kim Zember speak!
Show Petition Text
5016 have signed the petition.
Let's get to 6000!
Thank you for signing this petition!
Add your signature:
Show Petition Text

While affirming the validity of the Novus Ordo Mass, he noted how “it fails on all the transcendentals. It simply is not as beautiful, not as good, not as true, not as united.”

Because of this, added Mawdsley, “history will show that the TLM [traditional Latin Mass] is indestructible and grew back because of people’s love for it.” In contrast, the Novus Ordo will be shown to have “died out on its own because it’s sterile. It can’t produce vocations,” he said.

Instead, faithful Catholics should “go with Tradition,” he said, especially in light of a potential “schism.”

Opponents of traditional Mass will self-destruct

Not naming any specific individuals, the priest stated that opponents of the Latin Mass “do not understand the human being. They don’t understand selfless sacrifice, they can’t calculate for that. And if the Antichrist should succeed in removing this sacrifice, then it’s about then that our Lord Jesus Christ will return.”

This inability to comprehend the Mass led to persecuting those who are devoted to it, he argued.

Persecution of the faithful is a kind of ramped up version of just screaming abuse, because when you’ve tried to confuse people and they refuse to be confused, when you’ve tried to distract them from what matters – which is the worship of God – and they refuse to be distracted, then you just start screaming abuse at them because it’s the last thing you got.

Continuing a theme present in his own catechetical videos, Mawdsley spoke of a link between the political and ecclesiastical restrictions, “between the lockdowns and corona time, and Traditionis Custodes, which is seeking to ban the traditional Mass.”

“There’s a common worldview between them,” he said, “a common agenda and it’s all godless.”

Mentioning the widespread “confusion which evil hurls at us,” the priest argued that “the distraction is in many absurdities we see around us today, which are deliberately engineered to bring about conflict, for example, immigration, open borders.”

Pope’s move against the Mass necessary for his ‘agenda’

The traditional Mass keeps people strong, it keeps them sane, it keeps us connected with God like nothing else can. Therefore, Francis and those closest to Him want the traditional Latin mass destroyed.

“It’s evidently an obstacle to his agenda,” said the priest, referring to Pope Francis.

And that raises two questions. What is his goal if the fullest worship of God is an obstacle to that goal? I don’t know the answer. A more interesting question is who is he serving?”

Addressing also the Synod on Synodality – extended just days ago by the Pope to encompass a third year – Mawdsley called it an “attack on the highest good on earth and in heaven.”

The Vatican’s aim is to have “people in mortal sin receiving Holy Communion, and they want to overturn the hierarchy of Bishop, Priest, Deacon, that Jesus Christ instituted through through the apostles,” he said.

Now, the purpose of this is so that the holy sacrifice of the Mass is offered un-worthily by sexually active priests, in-validly by women priests, that the fruits of the sacrifice is received un-worthily by those in mortal sin, and so that there is a demoting of the Corpus Christi, the body of Christ, because holy orders are all ordered to the Holy Eucharist.

Yet, he closed his talk by warning against a passive observance of such actions, saying that “the blame is not all on the globalists. It’s up to us as well to make ourselves men.”

“Learn how to cast all your cares on the Lord and see how He brings you through,” added the priest. “And then you fear nothing. Learn that he is the Almighty who none can defeat, and He’s the loving father who does not leave a hair on our head un-numbered.”