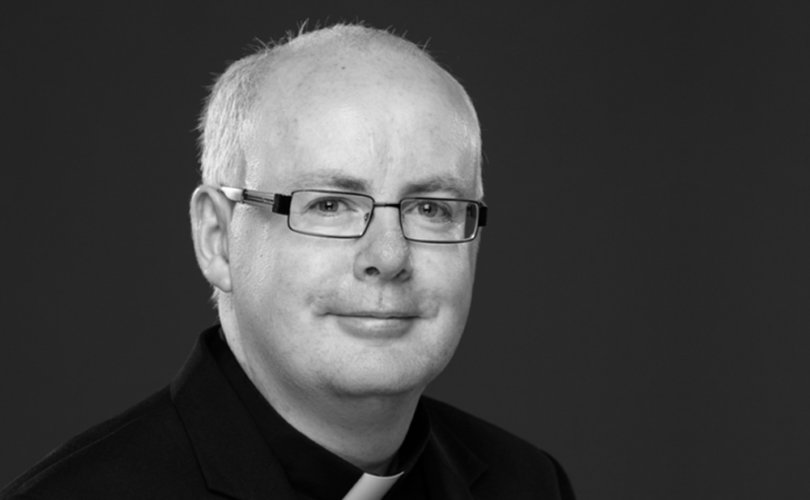 COUNTY DOWN, Northern Ireland, June 7, 2018 (LifeSiteNews) – A Catholic priest had his good name smeared in public after he indicated to a couple in Northern Ireland that the groom’s publicly expressed pro-abortion views might make the Church’s involvement in their wedding “inappropriate.”

For over a week they have kept media updated on their thoughts following a private message they received from the priest they had asked to celebrate their wedding.

After reading pro-abortion sentiments McAteer, an ex-Councillor for Newry, published on his Facebook page, Father Damien Quigley wrote to the couple saying:

“Just a heads up, that as the priest you’ve asked to celebrate your wedding for you, you and I would need to have a conversation about any promotion you may do to advocate for abortion in Ireland.”

“Such promotion or advocacy would impact on the appropriateness of me celebrating your wedding or possibly the wedding taking place in a Catholic Church.”

“I’m sure we could have a good chat over a coffee sometime.”

Unfortunately, the coffee was never poured. Instead, the private message was read on BBC Radio Ulster’s Nolan Show last Tuesday.

According to Catholic Canon Law, a priest cannot officiate at the marriage of a Catholic who has “notoriously [i.e. publicly] rejected the Catholic faith” without permission of his local ordinary, e.g. the local bishop.

Both abortion and cooperating with abortion in any way are grave sins according to Catholic teaching. Until Pope Francis’ Jubilee Year of Mercy, in many dioceses only a bishop could grant absolution for abortion. Now ordinary priests have authority to grant absolution for abortion-related sins. Performing, permitting or advocating for an abortion remain serious sins, and a Catholic who wishes to receive the Eucharist must first go to confession to express his or her sincere contrition.

In response to media queries, Fr. Quigley said in a statement that he had never refused to prepare anyone for marriage and that it would be inappropriate for him to discuss the matter further:

“From the outset, I wish to advise you that it would not be appropriate for me to discuss details of my pastoral support to any specific individual or couple in their preparation for the sacrament of marriage,” he wrote. “However, please be advised that I have never refused to prepare any person or couple for the sacrament.”

When the story first broke last week, the couple preferred to remain anonymous. However, on Sunday they went public with their names, and the Belfast Telegraph duly published them.

McAteer has now written both to Archbishop Eamon Martin, who is the Primate of both the Republic of Ireland and Northern Ireland, and to the Republic’s pro-abortion Taoiseach Leo Varadkar to complain about the priest.

McAteer described himself as a practicing Catholic.

“I go to Mass regularly, I say my prayers, I made my First Holy Communion and confirmation and I want my children to be able to do that too. But last Sunday Fr Quigley made his position clear,” he told the Belfast Telegraph.

However, it appears that the priest’s wish to discuss with McAteer his pro-abortion advocacy is causing the groom-to-be to lose his religion.

“My religion is important to me – my family is Catholic. My partner is Catholic. I want to be married in a Catholic Church,” McAteer said “This situation is starting to make me rethink my religion. The Catholic Church's stance on social issues like this is pushing young people away from it.”

As a Councillor for Newry, McAteer also introduced a motion to bring same-sex marriage to Northern Ireland. This too is a rejection of the teachings of the Catholic Church regarding marriage and reproduction.

McAteer told the Belfast Telegraph that “everything else” besides finding a priest to say the marriage ceremony had been arranged.

“We're looking for another priest to perform our marriage ceremony. The wedding is in limbo until we find a priest,” he said. “We've already arranged everything else.”

LifeSiteNews contacted both the Archdiocese of Armagh and Fr. Quigley but had not received replies by press time.