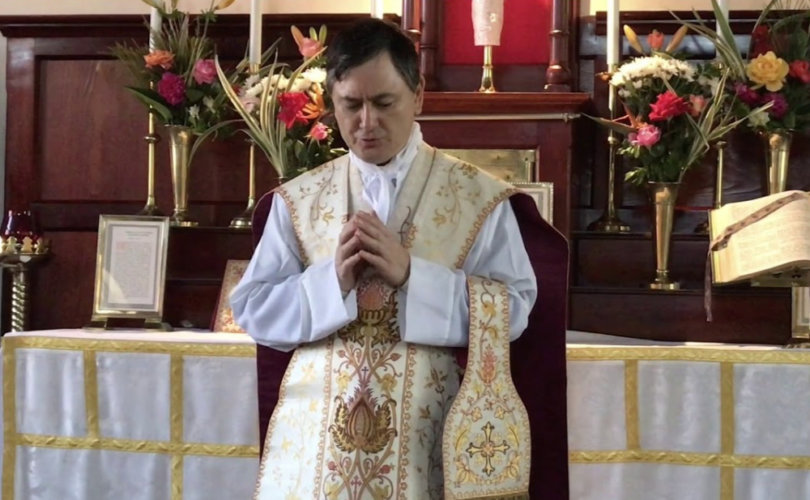 PERTH, Australia (LifeSiteNews) — A traditional Catholic priest in Australia is appealing for financial help to fight his legal battle after the local bishop moved to shut down the Latin Mass community and take over its property in secretive meetings.

Now Rowe is fundraising in order to lodge his final permitted appeal against Archbishop Costelloe in the High Court of Australia, in an attempt to safeguard the Latin Mass community in the city.

In 2007, upon the withdrawal of the Marist Fathers who had served the church, all Masses stopped in St. Anne’s church, part of the parish of Belmont, and the parish was put under the authority of the parish of Cloverdale, along with neighboring Redcliffe parish.

In 2008, Archbishop Hickey allocated the unused church of St. Anne’s to the Latin Mass community in Perth, stating in writing that it would be the “permanent location” for the Latin Mass. Appointing Fr. Rowe as the parish priest of the “quasi-parish” of St. Anne’s in 2008, Hickey then formally appointed him in writing as rector of the church in 2009, granting him full faculties of a parish priest.

The Latin Mass community subsequently moved to the church in 2009 and since then, according to the fundraiser, “has paid virtually all bills and expenses associated with the land and property at St Anne’s and its ongoing use and maintenance. They have also paid for significant improvements to the property in that time.”

“The Latin Mass Community did this because they believed the Archdiocese had given St. Anne’s and its associated land to them for their exclusive use as their permanent home,” Fr. Rowe’s fundraiser notes.

In 2018, Costelloe held a meeting at St. Anne’s with the archdiocesan Vicar General, along with various archdiocesan employees and the parish priest of Cloverdale in 2018, but Fr. Rowe was not even informed about the meeting.

In October 2018, Costelloe then merged three former territorial parishes by a formal decree, including St. Anne’s, and in January 2019 he wrote to Rowe, saying that the merger had led to Cloverdale parish owning both St. Anne’s land and property.

The Latin Mass community would thus become “homeless,” with the archdiocese hinting there would be no other location for them.

LifeSiteNews contacted the archdiocese seeking comment on the issue but was unable to reach anyone.

In light of the expulsion from their church of many years, Fr. Rowe repeatedly wrote Costelloe on behalf of the community, inviting him to visit St. Anne’s and to work out a different arrangement. Costelloe has reportedly left all such communication unanswered, in what was described as a “wall of silence,” leaving Rowe “no option” but to pursue legal action.

However, attempts at having the matter decided in Canonical courts have fallen flat, as the Vatican’s Congregation for Clergy refused to intervene, referencing that the appeal was too late — a technicality of canon law — by being outside of the 10-day time limit.

Fr. Rowe turned then to civil courts, but before the court proceedings began, he lodged a caveat on St. Anne’s with the Land Registry in the state of Western Australia, which the archdiocese challenged. This was challenged at the Supreme Court of Western Australia in November 2020. Thirteen months later, the court ruled against Rowe, saying it was essentially an internal affair for the Church.

In March this year, the Western Australian Court of Appeal also rejected most of Rowe’s appeal against the Supreme Court of Western Australia’s ruling “without even addressing them,” confirming that the “primary judge on the first occasion got it right, Fr Rowe has no right to make a claim because its an internal church matter, not a matter for civil courts.”

The appeal court argued that the “quasi-parish” of St. Anne’s was the issue under dispute in Canon Law, and not Fr. Rowe, hence Rowe could not bring the claim, but nor did the parish have rights in the appeals court since it was not recognized in civil law.

Rowe is now in the process of making his final appeal, to the High Court of Australia, asking for them to hear the case, with the hope that the High Court would overturn the earlier rulings in the same way it did for Cardinal George Pell  in 2020.

To do so, he needs to raise the necessary funds by April 1, 2022, in order for his case to proceed and be heard by the High Court.

LifeSiteNews is assisting with this by organizing a Life Funder for Fr. Rowe.