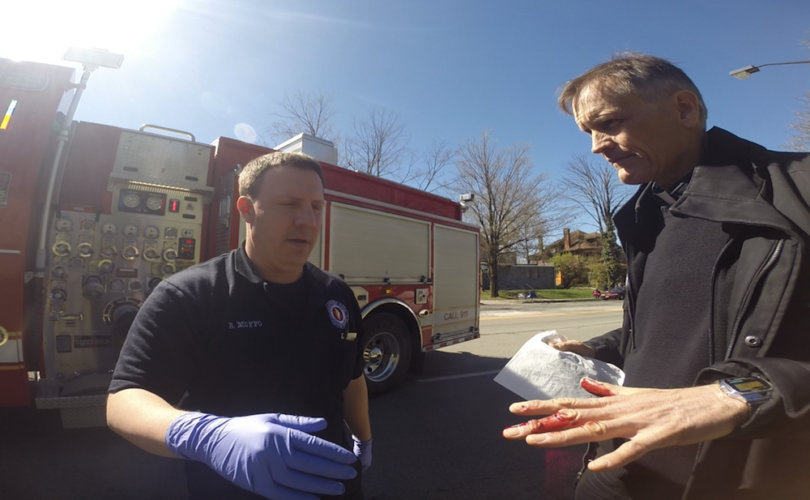 COLUMBUS, Ohio, April 13, 2017 (LifeSiteNews) – A Catholic priest was sent to the emergency room last weekend after he was attacked by a pro-abortion advocate while witnessing outside an abortion facility.

Father Joseph Klee of Columbus, Ohio, spent three hours in the emergency room. His hand was hit by the abortion advocate's van after he intervened to stop her from stealing their signs.

But he remains persistent in his commitment to defending life.

“I've prayed for this woman and have resisted sentiments of resentment,” he said. “After all, we're about to celebrate Our Lord's forgiveness of those who killed Him!!”

Father Klee gave permission for his story to be shared via LifeSiteNews through another pro-life supporter.

“We're doing all that we can to close the doors of this death camp,” he said, “and such news will hopefully help bring that about.”

He recounted how a fellow pro-lifer at the vigil noticed the woman on the opposite side of the busy street from the abortion facility trying to steal some of his signs with graphic abortion images.

“He and I ran across the street, one in front and the other behind her minivan, to keep her from getting away,” Father Klee said. “This fellow was able to pull the signs out of the vehicle before she panicked and tried to flee.”

It was then that the minivan driver assaulted Father Klee.

“I was in front of the van,” he said, “but she revved up the engine and appeared to not care that I was right against the front of the vehicle.”

“As she tore away and I stepped aside,” he continued, “my hand got caught in the grille of the van.”

In telling the story, the pro-life priest appeared to be more concerned that the attack caused him to waste three hours at an emergency room away from the vigil.

Father Klee, a priest for the Diocese of Columbus, is an ardent pro-life advocate. He is also a writer and prison chaplain who has worked in post-abortion healing ministry, Hispanic ministry and with the Columbus chapter of the Courage apostolate.

The medics and police came after the incident, he said, and a GoPro camera captured the pro-abortion woman’s license plate number.

Father Klee said the woman would have charges pressed against her for leaving the scene and for attempted property theft.

He was hopeful with the assistance of the detective handling the case that “this will set the anti-life forces back a tad.”

While showing mercy this Easter season is important, he pointed out that it was also important to take a firm stand in defending life.

“Pro-lifers need to ‘push back’ some now and then,” Father Klee said.