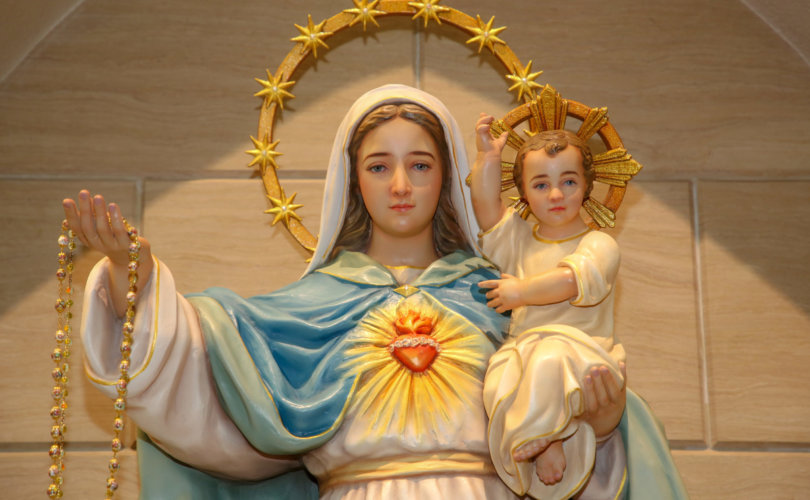 September 23, 2020 (LifeSiteNews) – A Catholic priest in Baltimore has invited President Donald Trump to consecrate the United States to the Blessed Virgin Mary.

Father Ian Bozant, a Priestly Fraternity of St. Peter (FSSP) priest at the National Shrine of St. Alphonsus Liguori, said he was inspired to ask President Trump to consecrate the nation to Our Lady after witnessing Christopher Macchio sing “Ave Maria” at the Republican National Convention.

“Mr. President, you have been given the authority to govern this nation from Almighty God, for all authority comes from Him (cf. Romans 13:1),” Fr. Bozant wrote. “As a result, you and all leaders of this world are engaged in a battle between good and evil, light and darkness. This battle should not be fought alone. … I ask you to consecrate this great nation to the Blessed Virgin Mary … so that you may invoke the protection of the great Mother of God.”

Because Fr. Bozant understands that authority comes from God and that humanity is engaged in a spiritual battle, he urged the President to consecrate the United States to Mary’s protection and aid.

“In light of recent events in our nation, an act of consecration to the Blessed Mother seems more and more important, entrusting ourselves and our nation to Her powerful intercession,” Fr. Bozant told his parishioners in an email.

Historically, October 7th has great significance for Catholics. On that day, in 1571, the Catholic armies defeated the Ottoman empire in the Battle of Lepanto through Our Lady's intercession and the power of the Rosary.

Additionally, the Archdiocese of Baltimore’s history makes it an ideal location for President Trump to consecrate the United States to the Immaculate Heart of Mary. The Archdiocese of Baltimore was the first Catholic diocese established in the country, with Bishop John Carroll as its first bishop in 1789. Just three years after Bishop Carroll was appointed bishop of the new diocese, he consecrated the young nation to Mary under her title of the Immaculate Conception.

The Archdiocese of Baltimore has been at the forefront of the nation’s history, and that’s why Fr. Bozant is asking President Trump to consecrate the country to the Blessed Mother’s protection at the Shrine of St. Alphonsus Liguori. Should President Trump accept the invitation, he will have the opportunity to ask Our Lady of Victory to “bring the light of victory to the darkness that gathers” to the United States, just as she did at the Battle of Lepanto.

In his letter, Fr. Bozant thanked President Trump for invoking Our Lady’s intercession in the “Ave Maria” at the RNC. He also reminded the President of the importance of calling on Mary’s aid and protection through prayer.

“The Catholic Church has invoked the intercession of particular saints and patronesses for all of the countries throughout the world. The patroness of the U.S. is the Blessed Virgin Mary under her title of the Immaculate Conception and so, it was most fitting that a prayer invoking her aid be sung from the seat of power of the Executive Branch of this great nation and I commend you for it,” Fr. Bozant told President Trump.

Fr. Bozant commended President Trump for invoking Our Lady’s aid and explained how fitting it would be for the President to consecrate the United States to the Blessed Virgin Mary’s protection since he is the nation’s Commander in Chief.

In the same email, Fr. Bozant reminded his parishioners of their duty to pray for our nation’s leaders and hope that they will consecrate the country to Our Lady’s protection.