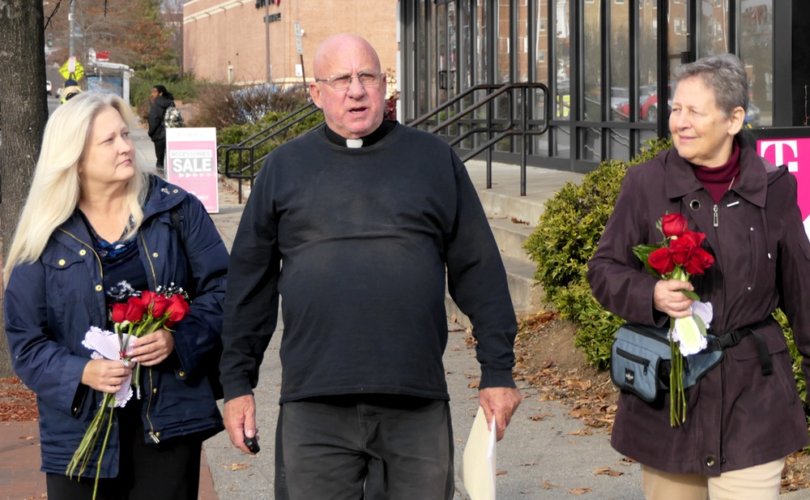 WASHINGTON, D.C., July 3, 2018 (LifeSiteNews) – The first thing a Catholic priest jailed last week for refusing to leave an abortion center did upon being incarcerated was fashion a makeshift paper cross and miniature rosary from a plastic bag.

Going to jail for seven days “was a minimal sacrifice to make to have a greater voice for the babies,” Father Stephen Imbarrato told LifeSiteNews. District of Columbia Superior Court Chief Judge Robert Morin sentenced Imbarrato to a week in jail after finding him guilty of trespassing. The priest, known for his social media videos, had, along with two other pro-life activists, refused to leave a D.C. abortion facility on December 2, 2017. The pro-life activists were counseling the mothers inside to choose life, offering them red roses and alternatives to abortion.

This was a “Red Rose Rescue,” part of a growing movement inspired by Canadian pro-life activist and prisoner of conscience Mary Wagner.

Fr. Imbarrato isn’t like most priests. He’s a great-grandfather. He owned and operated a restaurant before being ordained at age 53. He is also post-abortive and received a special dispensation that allowed him to become a Catholic priest anyway (normally, canon law makes it difficult for those who have participated in an abortion to enter the priesthood).

Upon arriving in the D.C. Detention Center, “they gave us a puzzle book, I tore off the cover, and the inside of the cover was completely white,” Imbarrato explained. “And I made it into a cross and I [wrote] different meditations on [it] that related to Christ’s crucifixion and also the slaughter of babies.”

“Then I fashioned a ten-bead rosary out of a strip of plastic that I took from the bag that they gave us to put all of our stuff in,” he said. “For the entire time I was there, I prayed countless rosaries, countless divine mercy chaplets, countless Angeluses, morning offerings, acts of contrition at night – the bookends of the day, right? –” and “sang hymns.”

The only other object of a religious nature the pro-life priest had were two Catholic devotional books a social worker gave to him and papers from a Bible study that a previous inmate left in his cell. He said he later found out through a handbook that he was allowed to bring a religious article of some kind, “so I could have brought my scapular in” and a rope rosary “if I knew about that ahead of time.”

He was in the intake block of the jail the whole time, and because his sentence was so short, wasn’t transferred to be with the “general population.”

Imbarrato had a total of three cell mates – all of whom he “evangelized” – and was without one for about half of his jail time. He spent 23 hours a day in his cell.

‘When do the babies get their day in court?’

On June 25, Imbarrato and the two women with whom he’d conducted the December Red Rose Rescue, Julia Haag and Joan McKee, were tried for it.

Morin allowed the pro-lifers to use a necessity defense, which permitted them to argue that they acted in a criminal manner to save babies’ lives. Rather than refuting the necessity defense, the prosecutor just focused on the trespassing charge, Imbarrato said, something he finds “telling.”

Imbarrato, Haag, and McKee all took the stand “to establish the fact that each of us were in there because we reasonably believed that these women were in danger and babies were going to die.”

However, the judge didn’t find the defense credible, and found them guilty.

Haag and McKee are scheduled to be sentenced on July 24. Imbarrato was sentenced right after the trial because he told the judge he wouldn’t abide by any probation or pay any fines. He told the judge if that meant he’d be incarcerated, he’d “consider it an honor to go to jail and that gives me a greater voice for the babies.”

All of the inmates Fr. Imbarrato encountered in the D.C. Detention Center were very respectful of his pro-life convictions, he said. As soon as they found out he’s a Catholic priest, they all were very curious about what he’d done.

“I did not have one person confront me” in a negative way about being pro-life. “I won’t use their colorful language,” but several told him they are strongly against abortion.

“I did quite a bit of fasting,” he said, but “most of it was not voluntary because the food was not edible for the most part.”

He wasn’t able to offer or attend Mass during his week in jail, but availed himself to the other inmates and did “as much ministry as I could.”

“The first thing that I told everybody [in jail], and they all got a laugh out of it, [was] ‘I’ve never been anywhere in my life where they tell you nothing and expect you to know everything,’” the priest recalled. “The single biggest problem that the people – the inmates – had there was connecting with their loved ones.”

Since his release, Imbarrato has set up and placed money into four inmates’ commissary accounts, which will allow them to more easily connect with their loved ones.

Something about life in jail that stuck out to Fr. Imbarrato was the manner in which inmates needed to ask for things in order to get them. He said correctional officers ignored him when he politely asked, “excuse me, sir, can I ask you a question?”

“Immediately, a number of guys, if they wanted something, they would scream ‘CO, CO!’” he recalled. The guards and inmates would yell back and forth until the shouting settled into a conversation and the correction officer responded to the request of the “loudest voice.”

The learned behavior is to “be the loudest, most annoying voice,” he said. “Is Our Lord telling me something about the pro-life movement? If we are respectful and docile, our voice is not going to be heard by the people who have the power.”