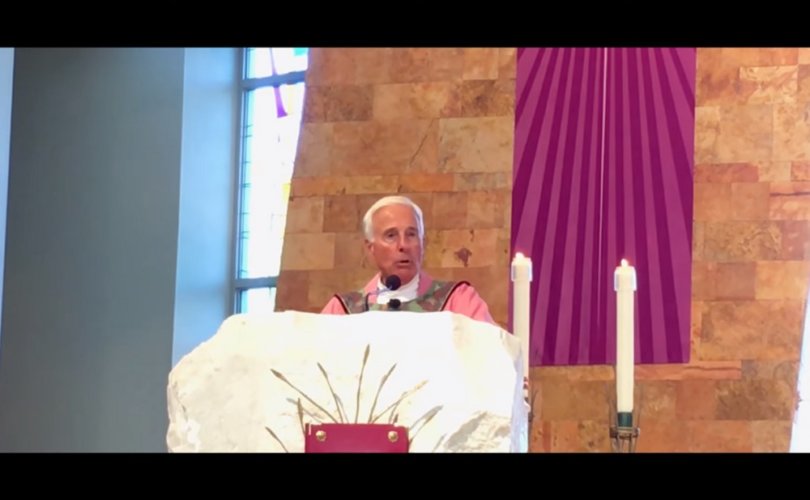 December 17, 2019 (LifeSiteNews) — In a Gaudete Sunday homily, a Florida Catholic priest asserted that if John the Baptist were alive today, he would challenge pro-abortion politicians who claim to be “good Catholics,” the normalization of homosexuality, “Pachamama” idolatry within the walls of the Vatican, and those who leave the Church.

Orsi, a priest of the Diocese of Camden, New Jersey who currently serves as parochial vicar for St. Agnes Parish in Naples, Florida, is also a writer and host of the weekly pro-life cable television series Action for Life TV. He is the former chaplain of Ave Maria School of Law in Naples.

What would John the Baptist say today?

“What would John the Baptist say today?” wondered Orsi, describing the Baptist as a “real man, a straight shooter” who spoke plainly, so people took offense at what he said.

“I think that the Baptist would certainly challenge people — especially politicians — who claim to be Catholic and are yet pro-abortion,” he suggested. “I think he would have some problems with that.”

“What else?” asked Fr. Orsi. “Maybe the celebration of disordered sexual expression  — LGBTQ+ — maybe John the Baptist would have a problem with that.”

“I just saw in recent days that even the Hallmark Channel, which is supposed to be family oriented, had a commercial with two brides kissing each other. I think John the Baptist might have a problem with that.”

Then Fr. Orsi turned his attention to the recent Synod on the Amazon.

“Pachamama is a fertility goddess from the Amazon,” explained Orsi.

“I think John the Baptist might have a problem with that. Remember the first commandment: ‘I am the Lord thy God, Thou shalt not have strange gods before me’? I think that’s a problem.”

Orsi proposed that John the Baptist would also challenge individuals.

“Sean Hannity — some of you might have heard of him — has announced that he is no longer a Catholic because of ‘mismanagement in the Catholic Church,’” said Orsi, referring to the longtime Fox News host.

“But now that he’s left, he says he feels closer to Jesus than ever. You know what that’s called?” asked Orsi. “A fake, phony fraud.” He went on to compare leaving the Church to abandoning one’s family because it’s messed up.

Orsi said Hannity’s announcement scandalized people. And while some people may respond by saying, “Well, maybe he has a point,” Orsi declared uncategorically:   “[Hannity] does not have a point.” The Catholic Church “is the Church instituted by Christ.”

“Would you be offended by a modern-day John the Baptist?”

“John the Baptist was talking about the coming of Christ, the beginning of the reign of the Messiah, the time of judgement,” Orsi explained.

“Would you be offended by a modern-day John the Baptist? asked Orsi, and would you   do as Herodius’s daughter Salome did and ‘do a dance for his head’?”

“But if you say, ‘well, maybe he has a good point,’ well, then you might hear the words of Christ: ‘Come to me, blessed of my Father, because you suffered for the truth,’” suggested Fr. Orsi, “‘and the Kingdom of Heaven will be yours.’”

‘Speaking the truth’ versus ‘being nice’

Last summer Fr. Orsi told a gathering of florida Republicans that a lot of people have the idea that as long as you’re a nice person, get along with everybody, and are politically correct, you’re going to be saved.

“Well, maybe not,” he said, “because you’re called to speak the truth.”

“Where do we find the truth? Where’s our nation rooted?” he asked. “In God, but God in the Bible, in the Judeo-Christian tradition. That’s where God is found, and that’s where we learn how to live as good human beings.”