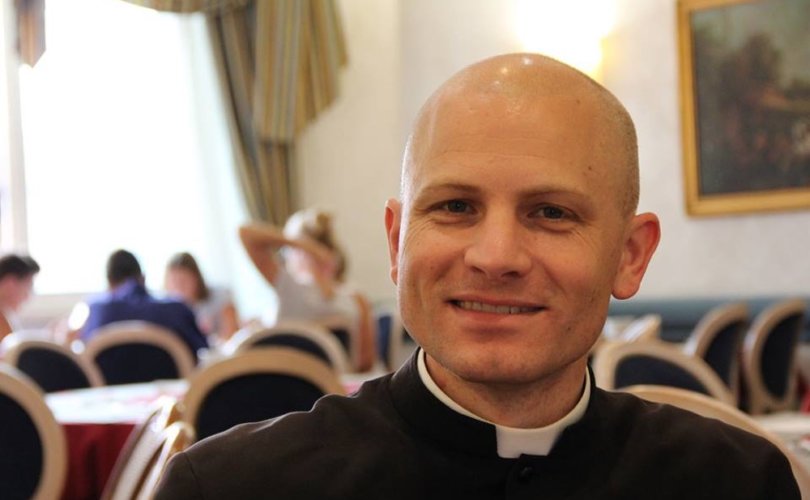 BRAZIL, Indiana, July 25, 2018 (LifeSiteNews) – The Catholic Church is a building on fire in need of faithful laity and priests who will help save her, Father John Hollowell preached in his Mass homily this past Sunday.

Hollowell, a priest for the Archdiocese of Indianapolis, was among those recognizing the correlation between the first reading in the July 22 Ordinary Form’s Mass scripture and the church’s still unfolding sex abuse scandal.

“Woe to the shepherds who mislead and scatter the flock of my pasture,” Father Hollowell recited from the first line of Jeremiah 23:1-6 to open his message. He returned to that quote a number of times throughout his homily.

Amid the ongoing Cardinal McCarrick sex abuse fallout and its having forced the Church’s homosexual clergy abuse crisis back to the forefront, many continue to ask the question of whom in the Catholic Church’s hierarchy knew about McCarrick and his reported abuse of young men, seminarians and priests and didn’t speak up or otherwise enabled the abuse.

Hollowell aptly described the sex abuse crisis in illustrative terms in his homily, calling upon the people in the pews and faithful priests to not abandon the Church, and rather to foster more vocations so that God can save His bride.

To frame his message Hollowell recounted how he pondered entering the Catholic priesthood back in 2001, when the abuse crisis first broke.

“There has never been a greater scandal in the Catholic Church,” he said, “and it’s hard to imagine a future one being worse. It affected me greatly, as it surely affected you here today and continues to stick with us, you and I, our own faith lives, the way we look at the Church.”

“And so I hope that we hear those first words of the reading today and take some comfort,” he continued. “Woe to the shepherds who mislead and scatter the flock.”

Then in 2005 as a seminarian studying in Rome along with about 250 other men preparing for the priesthood, he recalled there were about 30 older priests in Rome on sabbatical living at the same seminary as Hollowell and his group for the semester.

The seminarians didn’t engage with the older priests, thinking based on the priests’ appearances and choice to forego wearing their clerics that they didn’t have much in common, as the young men had come largely thinking they would not make the same mistakes as the generation before them.

The final day the older priests were with them, one had been selected to speak to the seminarians at lunch, and the young men were very skeptical.

“Was he going to get up and tell us we were overly rigid and too traditional and that we needed to calm down and be more loving?” asked Hollowell. “Our biases and prejudices definitely told us that’s what was coming.”

The older priest came up front in his khakis and polo shirt and the seminarians all rolled our eyes, he said, but then the priest took the microphone and gave a speech that none of them will ever forget.

The priest told the young men how when the older group had entered the priesthood they were respected and highly thought of as they headed off to the seminary, since the Church in America was in her heyday.

The priest then noted, however, that the seminarians there that day entered the seminary in the midst of the worst scandal in the history of the priesthood.

Father Hollowell said it was there that the older priest raised his voice as though he were a coach in a locker room.

The Church is on fire

“The Church is on fire right now,” the priest exclaimed, it’s burning with the scandals and sins, and you men ran into the burning building, and said, “I want to be a priest anyway.”

“Despite people looking at you like you’d be hurting children, you ran into the burning building,” he said, “and I want to say thanks to you.”

“My fellow priests who are here, we’ve all been talking for the last three months about how much we respect you,” the priest told the young seminarians. “And we’ve been talking about how we all feel like the Church is in really good hands. We applaud you, and we salute, and it has been an honor to be with you. God bless!”

The young men were moved by the support of this older priest, Hollowell added, clapping and tearing up, and they were convicted that they had often judged the older priests too harshly.

It was here that Father Hollowell bridged his past experience for those in the pews with the sex abuse crisis continuing to unfold today.

The Church continues to burn

“But you and I know the fire continues to burn in the Church,” Hollowell said, stating too that God knew this was going to happen.

“The wound in the Church continues to be infected and it oozes with fresh puss this week,” Hollowell said.

“The past few weeks a flood of stories have been revealed about one of the most prominent United States Cardinals of the last 50 years,” he said.

“And everyone says the same stuff,” continued Hollowell, “that everybody knew and nobody knew what to do about it, and no one knew who to tell, and there’s a fresh trail of people discovered to have been destroyed by his crimes and his actions – Woe to the shepherds who mislead and scatter the flock of my pasture.”

Hollowell said we might be tempted to think that “this horror of priests and bishops failing to live a life conformed to Christ” is something new.

But he added that John Chrysostom said 1700 years ago that, “The road to hell is paved with the skulls of erring priests, with bishops as their signposts.”

“So what do we do about it? Right?” Hollowell asked. “That’s the question.”

“Again,” he continued, “there’s never been a worse scandal in the history of the Church, and we know what God says: Woe to the shepherds who mislead and scatter the flock.”

“What the Church will do about it is anyone’s guess – the institutional Church, the hierarchy,” said Hollowell.

What should the faithful do?

In one sense, he said he couldn’t fault people who leave the Church due to the scandal.

“I don’t fault you if these past 17 years have made you seriously question your Catholic faith – it certainly has made me question mine,” he stated. “But I want to invite us to run back in.”

“We are the Church too – not just the shepherds,” Father Hollowell told the faithful present for Sunday Mass. “There are also lot of really good priests and holy people, and so I say, let’s do it together. Let’s encourage good young men and women to enter the religious life as priests and sisters, to rebuild and put out the fire.”

It’s important to recognize that the laity also has the ability to rebuild, he said.

“Let’s recognize that we can all still be a saint as a Catholic lay person even if some in the hierarchy of the Church are living completely morally bankrupted lives,” said Hollowell.

God will deal with the shepherds, and He will take care of His faithful

“God wants to do that, and He wants to do it through you and I,” said Hollowell, “and through the next generation of young people coming up – That’s how God wants to bring everyone back.”

“I invite you to join me as we run back in and double down our commitment to be Catholic Christians in a Church and a world that needs us,” he concluded. “Let us rise and be on our way to becoming Saints.”

Father Hollowell, who has been frank in communicating Church teaching on abortion and marriage in the past, has posted his “Woe to the Shepherds” homily on his Facebook page and his blog, “On This Rock.”