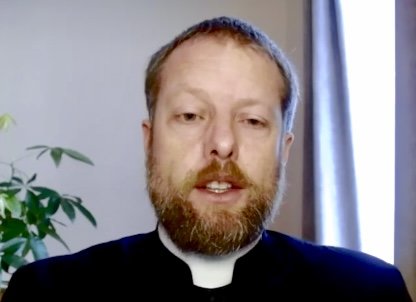 Fr. James Mawdsley’s video at The Remnant TV, which was removed from YouTube on Feb. 10, explained three steps to overcome the measures put in place to fight COVID-19.

The first step given is that one should do nothing that would contradict conscience. Regarding the shot, Mawdsley said, “If taking a gene therapy deriving from embryos is against your conscience, don’t go near it.” Mawdsley also advised not to act irrationally, claiming that the devil seeks to hide the image of God through irrational behavior.

Speaking about the use of masks, Mawdsley said, “If you understand it is irrational to wear a mask in your car, or anywhere outdoors, or even indoors, then you cannot do it. If someone is afraid and thinks that a mask is part of the solution, then nobody’s gonna give them a hard time for wearing it. But it is not charity to feed a mental illness,” Mawdsley said. “Wearing a mask is not without cost. It reinforces a narrative of fear, of desperation, and worse, it’s a sign of subjugation. None of which is charity.”

The second step described by Mawdsley is not to compel others to comply with mandates. “Tyrants absolutely depend upon layers in the population inflicting control on layers beneath them,” Mawdsley explained, adding that all a tyrant needs for compliance is the compliance of a few, who in turn would make others comply with them.

“The more people who refuse to comply and refuse to compel, the easier it becomes for those up the hierarchy to refuse as well,” Mawdsley said. “The resistance begins below. If it is strong below, then those in the middle layers will not stand out for failure to impose the ideology.”

The third step Mawdsley outlined is to foster devotion to the Blessed Virgin Mary. Encouraging viewers to pray the rosary every day, Mawdsley explained that “the Blessed Virgin Mary will give clarity, courage, and will open doors.” Stating that the devil wishes that people give in to hatred or despair over COVID measures, Mawdsley declared that Mary protects them.

Mawdsley also said that people must be ready to pay a price for defense of the truth. “No creature paid a higher price than Mary,” he said. “Seeing her Son die was more painful to Mary than dying herself.” “If we become like Mary,” Mawdsley continued, “we will be ready to pay any price. But we can start simply by praying the rosary.”

Mawdsley appeared in the news earlier this month when he left the Fraternity of St. Peter (FSSP) over Pope Francis’ motu proprio Traditionis Custodes, claiming that the suppression of the Traditional Latin Mass (TLM) was an act of sacrilege. He also served 14 months in prison in a Burmese prison for protesting the Burmese government’s human rights abuses.

Mawdsley is not the only priest to speak out against COVID measures.

Last month, Fr. Peter Williams of the Diocese of Burlington, Vermont was suspended after he refused to take the jab or wear a mask while celebrating Mass. In an interview with LifeSiteNews, Williams said that refusing the shot was a matter of conscience, citing the use of aborted babies in the development of the jab.

Fr. Regis de Cacqueray, former district superior of the Society of St. Pius X (SSPX) in France and now a Capuchin monk, published an article last year that condemned the use of aborted cell lines in the jabs, stating “Each one of us must act according to his conscience formed according to the divine law and not commit what is evil, even if he is the only one in the world to oppose it.”

Cardinal Raymond Burke, former head of the Apostolic Signatura, also spoke on the issue, saying that the state would “[violate] the integrity of its citizens” if it mandates the jab.

Fr. Anthony Hannan, a Canadian priest and YouTuber commenting on the Freedom Convoy protesting mandatory COVID jabs, said that “all the truckers and all those involved in the convoys … [are] doing the right thing.” “If everyone stops complying,” the priest continued, “they will not be able to enforce the ridiculous mandates.”