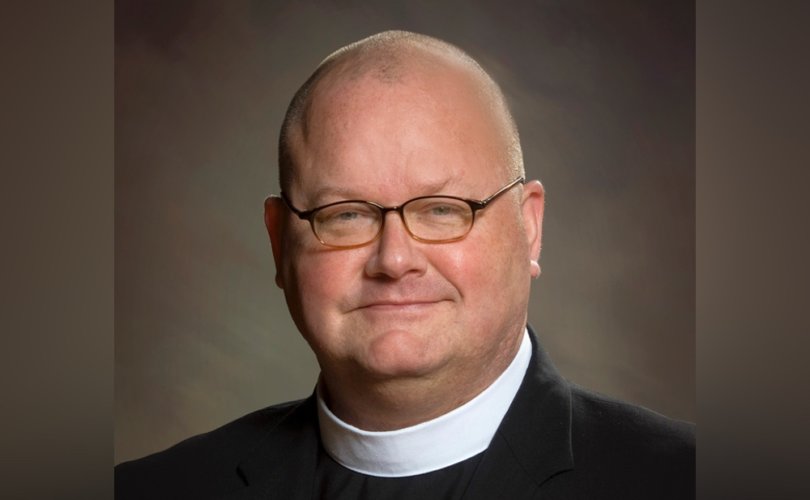 GREENVILLE, South Carolina, July 31, 2018 (LifeSiteNews) – A U.S. parish priest was planning to celebrate the 50th anniversary of Humanae Vitae on the weekend by preaching on the great encyclical, but then the scandal of ex-Cardinal McCarrick made him change his plan.

So instead Fr. Jay Scott Newman gave a must-hear homily blasting priests and bishops who have rejected Humanae Vitae, both by teaching false doctrine and through their own “evil conduct.”

“The treason of Cardinal Theodore McCarrick is a damnable abomination,” he said, “but while McCarrick’s sins are appalling, they are merely the crimes of one man…. Worse … is the systemic corruption of priests and bishops who do not believe what the Church teaches but continue to preach anyway.”

McCarrick was recently removed from public ministry over a credible allegation he molested an altar boy 50 years ago. Whistleblowers and victims have come forward to describe McCarrick’s predatory behavior and the disregard they received from Church officials when reporting it. Pope Francis accepted McCarrick’s resignation from the College of Cardinals this weekend.

Newman described how, after promising at their ordinations to teach the Gospel as it has been revealed by God and is communicated by the Church, corrupt priests behave rather differently.

“…With a wink and a nudge they encourage cynical disregard for the revealed truth of God’s eternal Word,” Newman continued, “and create a new religion of their own devising, a faith that will not disturb the indulgence of their ambition and lust, and which encourages the people of God to disregard the solemn and sacred truths about love, marriage, sex, and the gift of children.”

Newman reflected that, in all the craziness of 1968, the only reason the media was interested in Humanae Vitae was that many Catholic priest and theologians rejected it, sometimes not even stopping to read it before writing screeds against it.

“Revolution had come, not just to our universities and city streets, but to the Church,” he said. “And the content of Pope Paul’s letter was lost in the storm which was unleashed by the spectacle of priests telling their people to disregard the solemn teaching of the Church, too often with the silent consent of their bishops.”

The homilist found it an “odd coincidence” that the 50th anniversary of Humanae Vitae had fallen just when the disgraced Cardinal Theodore McCarrick had been “unmasked as a serial predator and abuser.” He spoke bitterly of how McCarrick had managed, despite his evil treatment of boys and men under his care, to rise through the ranks of the Church hierarchy. Newman called the archbishop emeritus’ behaviour  “sickening and almost beyond comprehension”, but he was just as scathing about other, unnamed, bishops:

“..Even worse than this man’s personal atrocities, is the failure of other bishops to decry his sins and the damage he has done,” Newman said.

“Most bishops simply have not spoken, and too many of those who have, sounded more like liability lawyers or company spokesmen protecting their interests than like the prophets and apostles who denounce unrighteousness and call God’s people to repentance and conversion, contrition, confession, and amendment of life,” he continued.

Saying that he believes that the priesthood is a “beautiful, essential gift to the Church,” Newman nevertheless denounced a clerical culture that is “in many ways diseased and deformed and must be made new by the fire of divine love and the truth of the Word of God.”

The homilist said that he had never been surprised by the world’s rejection of “hard sayings” concerning sexuality, but that the rebellion of pastors, bishops, and the College of Cardinals against them was not something we expected. He said he hoped that McCarrick would be laicized, and that every bishop he promoted “should be scrutinized to make sure this disease does not spread”.

Bishops with significant ties to McCarrick include Cardinal Blase Cupich; Cardinal Kevin Farrell, who is the Prefect of the Dicastery for Family, Laity and Life; Cardinal Joseph Tobin; and Cardinal Donald Wuerl.

However, Newman also told his listeners to remember that the only one who profits from shameful clerical sins is “the father of lies” who wants humanity to reject the Gospel.

“Strike the shepherd, scatter the sheep,” he said. “Discredit the messenger, and you discredit the message. That is the strategy of our ancient enemy, the fallen one who does not want us to hear and heed the will of God.”

He asked his congregation to ponder what they themselves can do to help heal the Church, and offered five suggestions himself: that they read Humanae Vitae and change their lives to live its teaching; to study Part III of the Catechism, which provides training in virtue; to go to Mass at least once a week; to go to Confession regularly, perhaps once a month; and to “pray for all those who stumble and fall, including Ted McCarrick.”

Father Newman, who recently celebrated his 25th anniversary as a priest, has been the pastor at St. Mary’s Catholic Church in Greenville, South Carolina for 17 years.

Steve Wood, a parishioner at St Mary’s, told LifeSiteNews via email that he was heartened by his pastor’s strong sermon.

“I have been terribly upset by the long string of clergy abuses and even more by the episcopal cover-ups,” Wood wrote.

“After hearing Fr. Newman's homily in Mass on Sunday, I was encouraged that the clergy abuse cover-up was not being swept under the rug in my parish,” he continued.  “As I shook Fr. Newman's hand after Mass, I thanked him for a superb homily.”