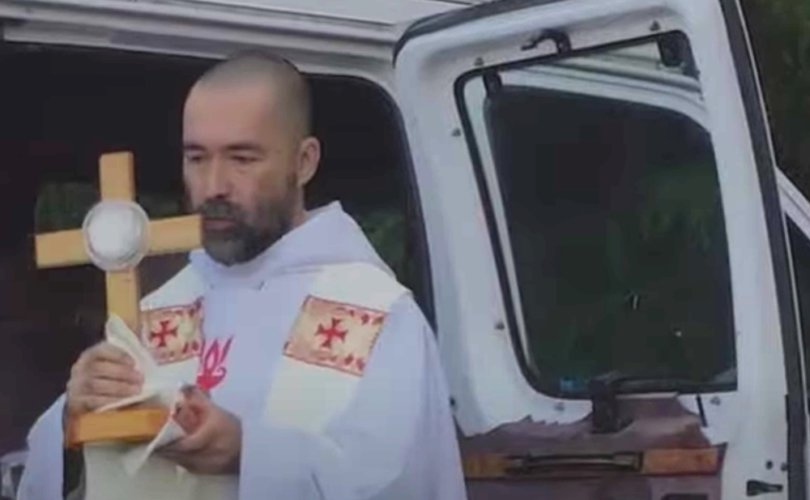 BETHESDA, Maryland, August 13, 2020 (LifeSiteNews) – Shortly after daybreak on the Memorial of St. Clare, August 11, Father Antonio Maria, C.F.R., celebrated a Mass for life in a shopping center parking lot adjacent to late-term abortionist LeRoy Carhart’s facility in Bethesda, Maryland. Carhart is one of only a few abortionists in the U.S. who is willing to abort babies through all nine months of pregnancy – right up until birth.

In May, Carhart aborted two children at 25 weeks of gestation – a time when babies are routinely viable outside of the womb. Their mothers, according to an eyewitness and reported by Operation Rescue, suffered life-threatening injuries that required emergency surgery and hospitalization and resulted in permanent physical impairment. Missy Smith, a decades-long pro-life advocate, has spoken to both women and their families. She confirmed initial reports that one woman can never bear children again and the other has had several operations to repair internal physical damage.

Carhart, according to Operation Rescue records, has caused 22 serious injuries and one patient death at his two abortion facilities in Maryland and Bellevue, Nebraska, since 2012. Eight complaints have been filed against him with the Maryland Board of Physicians, but no disciplinary action has been taken. After the two recent botched abortions, Operation Rescue sent a letter on June 8 to U.S. Secretary of Health and Human Services Alex Azar seeking an investigation into Carhart’s practice.

In his homily, Father Antonio, a Franciscan Friar of the Renewal, spoke about the miracles of St. Clare, a disciple of St. Francis of Assisi, attributed to her devotion to the Holy Eucharist and a life of austerity and penance. She was credited with saving the lives of the citizens of Assisi twice, when the city was besieged by Saracens. The priest presented St. Clare as “an example of the power of faith and devotion to the Holy Eucharist.”

This was the 11th Mass and first Eucharistic Procession near this abortion facility. The Masses have been offered by various priests. When Carhart was located in Germantown, before moving to Bethesda, a Mass was said each Saturday morning for several years in an office next door to his abortion center. Dick Retta, who leads a prayer vigil each Monday year-around in front of Carhart’s facility, said, “With prayer, witness, and persistent activity by the pro-life community, the abortionist left Germantown. Hopefully, he soon will leave Bethesda.”

1
FBI raids home of Catholic pro-life speaker, author with guns drawn as his terrified kids watch
2
Rand Paul: Fauci is covering up COVID origins to evade culpability for funding risky research in China
3
Prophecy: War will break out in Europe after Pope visits Moscow
4
There is raw evil in the top levels of power in the USA, using federal agencies to terrify America’s best citizens
5
Video surfaces of FBI raid, arrest of nonviolent pro-life activists
Subscribe to Daily Headlines »