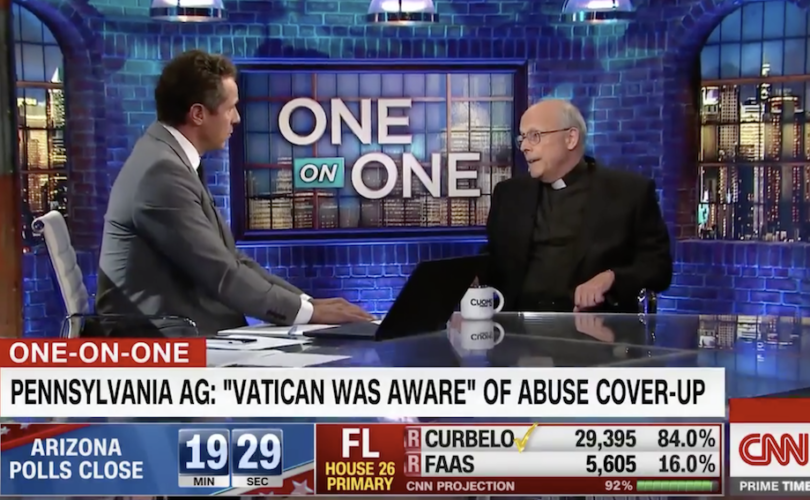 “The Church…just wished it would go away,” said Fr. Ramsey. “I’m sure that’s the case.”

“I know you as a man of integrity,” anchor Chris Cuomo said, revealing that Fr. Ramsey was the celebrant at his marriage.

Fr. Ramsey and Cuomo discussed the priest’s November 2000 letter to Archbishop Gabriel Montalvo, the U.S. apostolic nuncio at the time, warning that McCarrick was harassing seminarians and having them sleep in his bed.

“I certainly heard directly from people” who were victimized by the powerful archbishop, the priest recalled. He was teaching at Seton Hall University’s seminary, where seminarians of McCarrick’s diocese were.

Fr. Ramsey said when he spoke with Cardinal Edward Egan, former archbishop of New York, in 2004, “clearly, he was embarrassed by this and didn’t wanna talk about it.”

Fr. Ramsey also wrote a letter to Boston’s Cardinal Sean O’Malley in 2015, describing “in detail what McCarrick did.”

O’Malley runs a papal commission on stopping clerical sex abuse. His office wrote back to Fr. Ramsey saying the issue was out of its purview. O’Malley fundraised and traveled with McCarrick after his office received that damning letter.

“You know if Boniface Ramsey knew, other people knew” about McCarrick, Cuomo commented. “Now, we know from the AG – from the [Pennsylvania] grand jury report – lots of people knew lots of things. Why was this covered up?”

The Pennsylvania report did not pertain to McCarrick, but documented sex abuse allegedly committed by 300 priests in six dioceses over decades, and the Church’s systematic cover-up.

“It’s hard to confront a fellow bishop…only a bishop could do that, and it didn’t happen [in McCarrick’s case] I suppose,” Fr. Ramsey noted, adding that the Church just “wished it would go away.”

He also said that he had only been blowing the whistle on McCarrick’s abuse of adult men. That McCarrick also abused minors was revealed this summer when the Archdiocese of New York announced it found an allegation McCarrick molested an altar boy credible, and then by a subsequent New York Times story on a different underage victim.

Fr. Ramsey speculated that when Church officials heard of McCarrick preying on adults, “they must have assumed…that’s pretty bad, but it’s not illegal.”

Cuomo then brought up Viganò’s testimony.

“We don’t know if he’s been co-opted by anti-pope groups or whatever – we don’t know yet,” the CNN anchor said, even though Viganò has explained his reasons for going public with explosive details about the Vatican’s covering up of sex abuse.

“But do you believe there’s a chance that Pope Francis…people hold faith in him as a reformer – knew about McCarrick, knew about some of these things, and didn’t drop the hammer on them?” asked Cuomo.

Fr. Ramsey responded that “there’s always a chance,” and he doesn’t know what percent it is. He said it’s worth the Vatican answering, though.

Pope Francis has refused to say whether he helped cover up McCarrick’s sex abuse, choosing instead to focus on the “emergency” of littering in the oceans. He also compared his critics to a “pack of wild dogs” and suggested the best response is silence.