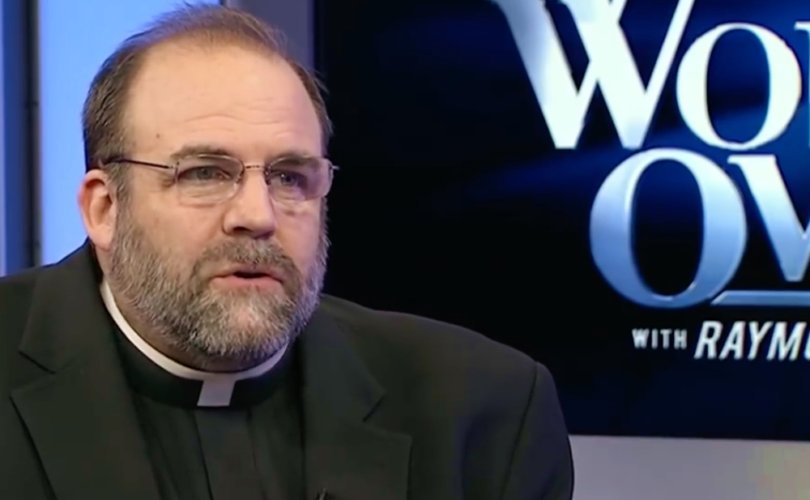 It’s also about the bishops’ failure to impart the Church’s moral teaching, he said, and is not rooted in clericalism.

“We have to be clear, I think, that this is about homosexuality,” Pope stated, adding that that is “a big culture of that in the priesthood.”

“It’s also about not preaching and teaching moral teachings of the Church, not insisting upon them, allowing for dissent to go unchecked,” Pope said. “I think again it comes back to teaching, governing and sanctifying.”

The blogger and priest of the Archdiocese of Washington had broached these three duties conferred upon bishops and priests in his recent National Catholic Register column in which he implored the bishops of the U.S. to restore order in the Church. Arroyo brought Pope on to the program to discuss the content of the column and to discuss the abuse crisis as the U.S. Bishops’ meeting approaches November 12-14.

There are some in the Church, some of the bishops who claim based upon data that homosexuality is in no way involved in the abuse crisis, Arroyo said, that this is child predation, this is pedophilia.

“But the data suggests something very different, actually,” he queried Msgr. Pope. “Why the inability to acknowledge what is so apparent in the data?”

“There is a climate of fear and of course it’s created, I think, by our culture that you can’t say anything that’s even in any way negative or untoward towards those with same-sex attraction,” Pope replied. “And I think that, again, we have to say we’re all prone to sin, and we have to get over that fear.”

Pope said that the link between the sex abuse crisis and homosexuality is “very clear” and called it “strange” for anyone to say “this has nothing to do with homosexuality in the priesthood.”

“It does. And it’s very clearly backed up statistically,” he said.

Pope said he hoped the bishops would look carefully at the recent study of the issue from Father Paul Sullins with the Ruth Institute.

He further urged the bishops, “To be very careful about the seminary and who we admit and to be very clear about the nature of the problem.”

“Not just this, but all sins across the board, we’ve got to get back in the business of calling sin by its name,” he said.

Arroyo asked Pope what he would tell the bishops they should do if he were advising them.

Along with speaking clearly, Pope recommended getting back in the business of teaching about sexual morality.

“Jesus offended a few people,” he continued. “He didn’t [end] up on a cross by just saying nice platitudes.”

Msgr. Pope spoke of the need to also get back to issuing sanctions in the Church when needed, and without explicitly naming pro-LGBT Jesuit priest James Martin, gave him as an example.

“We have to get back in the business of speaking clearly and teaching clearly, and then also, we have to discipline in the Church,” Pope told Arroyo. “Whatever happened to sanctions? Nobody seems to ever be sanctioned.”

“I won’t mention his name but there’s a renegade priest who runs around talking the LGBTQI agenda with no reference to repentance,” Pope said. “There’s no discipline, nobody reins him in.”

Bad teaching across the board over the last 40-50 years has infected the mentality of everyone, clergy and lay people alike, the Msgr. added.

Arroyo asked whether Pope Francis’ adopted position of silence on sex abuse questions – particularly on McCarrick issue and the Vigano charges – is hurting the Church.

“It is,” said Msgr. Pope. “And it very gravely hurts God’s people.”

Pope explained that Francis has actually been vocal about the issues in insulting those who request accountability, stressing the awkwardness of having to state such things about a pope.

“He really hasn’t been silent, that’s the problem,” Monsignor said. “He refers to people who disagree and want investigations as monsters, accusers, a pack of wild dogs.”

“I mean, these are things he said,” he added of the pontiff. “And there’s what I would call weaponized ambiguity. He uses very ambiguous terms about things, and he leaves the faithful guessing.”

“At some point we have to say, Holy Father, we’re your children,” said Pope. “Take spiritual care, respect us, love us, listen to us.”

Such criticism is out of care and love for the Church, he told Arroyo, and love for sex abuse victims and the good people of God.

Questioned about the repeated attempts by some churchmen to fault clericalism for the sex abuse crisis, Pope dismissed this.

The pope and Chicago Cardinal Blasé Cupich have attempted to lay blame for the Church’s sexual abuse scandal on clericalism, typically understood as undue deference to clergy. This theory has been disputed by at least one prominent cardinal and drawn criticism from a noted psychiatrist and others in the Church.

“No,” Msgr. Pope said. “There’s abuse of power, there’s clericalism, but at the end of the day, this is basically a sexual issue.”

“Priests who abuse are guilty of sacrilege,” said Pope. “They’re also guilty of spiritual incest, and, as I say, in many cases it’s homosexual predation as well.”