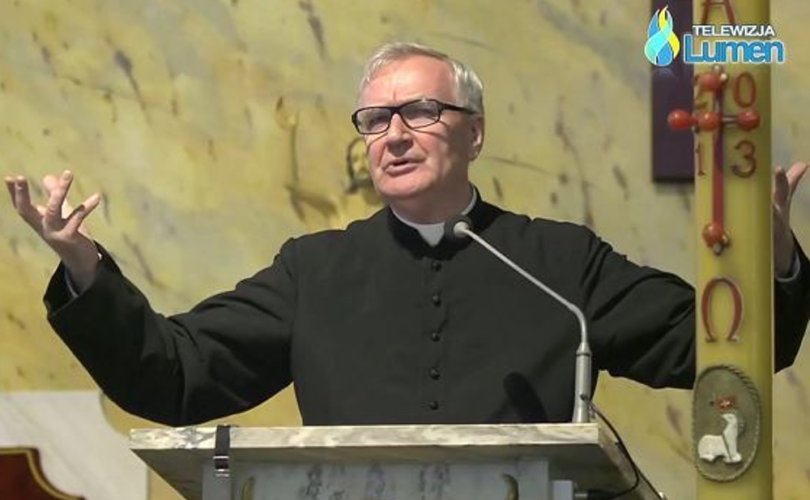 KRAKOW, Poland, March 19, 2018 (LifeSiteNews) – A leading priest in Poland is making headlines after saying from the pulpit that he prays Pope Francis will die if he doesn’t do the will of the Holy Spirit.

Father Edward Staniek, 77, is a patristics scholar and rector of the Major Seminary of the Archdiocese of Kraków from 1993 until 2001. He was ordained to the priesthood in 1965 by Karol Wojtyła, now known as Pope Saint John Paul II, and has authored over 40 theological or catechetical books.

In his now-famous homily, given in Kraków on February 25, Father Staniek said that he prays for Pope Francis to receive wisdom, and insisted that the pope’s authority derives solely from obedience to Jesus Christ.

“I pray for wisdom for the pope, for his heart to open to the influence of the Holy Spirit, and if he doesn’t do [His will], I pray for his swift departure to the house of the Father,” he said. “We can always ask God for a happy death for him because a happy death is a great grace.”

Authority and not power

According to Polonia Christiana, a central theme of Staniek’s sermon was that authority in the Church and mere leadership in the Church are two different things.

“Who is the biggest authority for me? Is it Jesus?” asked the priest. He explained that authority is respect for someone reliable, someone who deserves trust for some reason, like being a specialist in a given field. However, authority is deserved only by those who are responsible.

“Respect for such an [authoritative] person results in his opinion being important. The foundation of authority is a person’s responsibility,” the theologian said.

“My God is [Himself] responsibility,” Staniek continued, “and He makes me in His image and likeness. He is Authority. And I have to be an authority that is 100% responsible for his words, thoughts and actions.”

Father Staniek warned against automatic assumptions that professional churchmen are authorities. He included the pope, the cardinals, bishops, and parish priests among those who might be powerful but not authoritative. Being able to give orders doesn’t mean that someone has true authority, Staniek explained. Meanwhile, the one-and-only authority in the church is Jesus.

“You cannot be given [real] authority,” the priest said, “you can [only] grow up into it. The only authority in the Church is Jesus. Not the pope, not the hierarchy… It’s Jesus. And the Church lives on the basis of His authority. Whoever in the Church … acts like Jesus, then this person is radiating with His authority. A high position gives power but not authority.”

The priest then gave his opinion that Pope Francis departs from Jesus by making two erroneous interpretations of Christ’s mercy. According to Staniek, Francis is wrong both to order churches and dioceses to invite Muslims in and to encourage people in mortal sin to receive Holy Communion.

“In the name of mercy [Francis] calls for parishes and dioceses to open the doors to Islam,” he said. “[This is] a religion that is hostile towards the Gospel and the Church. In religious wars they have killed millions.”

Alluding to the victory of the Polish king Jan Sobieski III over the Ottoman Empire, Staniek said that the Poles understood Islam better than others.

“We, the Poles … understand better than others that there is no option of having a normal dialogue with them. We can show mercy to Muslims who are starving to death. The doors of dioceses and parishes we open only for those who believe in Jesus Christ,” he said.

“The second instance of wrongly interpreting mercy is opening the doors to Holy Mass, the Holy Sacrament, for people who choose sin as their world. They can receive the Eucharist on the condition that they convert and atone for their sin. He who knows the holiness of communion prefers to kneel before the [Blessed Sacrament] and beat his breast [and say] ‘have mercy upon me a sinner’ than stretch out his hands or tongue for the Holy Bread.”

The priest said that true mercy is urging serious sinners to repentance, not admitting them to Holy Communion.

“For the unholy, it is as deadly a food as it is a sacrilege,” Staniek said. “Allowing [hardened sinners] in Church to take part in the sacred is a profanation of the sacraments.”

“What is the pope’s motive? I don’t know,” he continued. “What is the point of his [controversial] statements? I don’t know this either. I know how these speeches are used by the media, who aim at destroying Jesus Christ and His Church.”

Then Staniek dropped the bombshell now being belatedly heard around the world.

“I pray for wisdom for the pope, for his heart to open to the influence of the Holy Spirit, and if he doesn’t do [His will], I pray for his swift departure to the house of the Father,” he said. “We can always ask God for a happy death for him because a happy death is a great grace.”

Alluding to the Gospel of the day, which told of the Transfiguration of the Lord, Staniek suggested that it is by no means certain that Pope Francis, though powerful, partakes in Christ’s authority.

“The Church of Christ is not built on power”

Father Staniek’s homily, entitled “Authority and not Power”, was initially published on the website of Catholic magazine Ktoś Jak Bóg ? (Who is Like God?). It has been removed.

The Metropolitan Archbishop of Krakow, Marek Jędraszewski, has released a short statement saying that he felt “pain and regret” upon receiving news of Staniek’s homily and had spoken to him about it.

“I assure you that the whole Church in Krakow daily prays ardently for the intentions of the Holy Father, Francis, asking the Lord God to give him the grace he needs to fulfill the Office of Peter in the one, holy, catholic and apostolic Church,” the archbishop said on March 17.