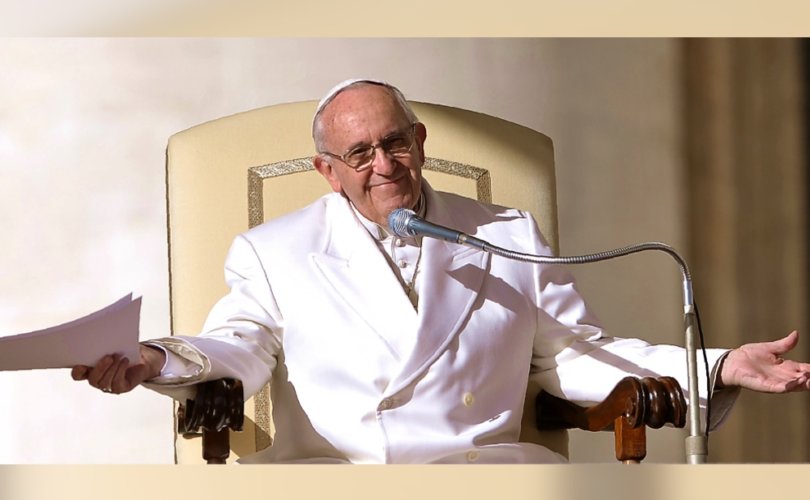 ROME, May 24, 2017 (LifeSiteNews) — Pope Francis’ influence in the Catholic Church has been a “great and true blessing” since his ambiguous teachings have drawn the “anti-Church” out of the shadows into clear view for all the faithful to see, a priest told a gathering of pro-life and pro-family leaders in Rome last week.

“The advent of Pope Francis has, in the divine order of things, proved a great and true blessing,” Fr. Linus Clovis of Family Life International said in his talk at the Rome Life Forum on May 18.

“A hidden conflict has been raging in the Church for over one hundred years…Under Francis, the first Jesuit pope, the first pope from the Americas and the first pope whose priestly ordination was in the New Rite, it is now full blown, with the potential of rendering the Church smaller but more faithful,” he added.

Clovis said that St. John Paul II’s 1976 prophetic warning about the rise of an “anti-Church” that would preach an “anti-Gospel” is being fulfilled today by leaders within the Catholic Church, even at the highest levels.

The anti-Gospel of the anti-Church is often “indistinguishable from secular ideology, which has overturned both the natural law and the Ten Commandments,” he said.

“This anti-Gospel, which seeks to elevate the individual’s will to consume, to pleasure and to power over the will of God, was rejected by Christ when tempted in the wilderness. Disguised as ‘human rights,’ it has reappeared, in all its luciferian hubris, to promulgate a narcissistic, hedonistic attitude that rejects any constraint except that imposed by man-made laws,” he added.

Clovis said that while the rise of the anti-Church has been happening slowly but steadily over the past decades, its emergence has been especially noticeable in the last few years.

“For the past half-century, there has been a growing crisis in the Church, arising as much from a lack of clear and unambiguous teaching, as from the climate of dissent among priests, religious and laity. Within the contemporary Church, the crisis has been brought to fever pitch, if not breaking point, by the rejection of Our Lord’s yes/no paradigm and the undermining of established doctrinal positions by protean pastoral practises,” he said.

The priest noted that there is a sense among faithful Catholics that “things ecclesiastic and catholic are falling apart and a pastoral anarchy has been loosed upon the Church.” He said that a “hidden exercise of power” is currently at work within the Church that is fueling such anarchy.

“[It] can reform the marriage annulment process without the customary consultation of the appropriate Roman dicasteries; issue a broad and scathing rebuke of the Roman Curia in a Christmas address; purge a dicastery’s membership, which effectively vitiate the influence of its Prefect who had stood firmly against innovations injurious both to the teachings on marriage and to the tenets of the liturgy; cripple the Franciscan Friars of the Immaculate; and shut down the Melbourne campus of the John Paul II Institute,” he said.

The priest warned how the anti-Church will try to deceive the faithful by passing itself off as the true Church.

“It is self-evident that the Catholic Church and the anti-Church currently co-exist in the same sacramental, liturgical and juridical space. The latter, having grown stronger, is now attempting to pass itself off as the true Church, all the better to induct, or coerce, the faithful into becoming adherents, promoters and defenders of a secular ideology,” he said.

“Should the anti-Church succeed in commandeering all the space of the true Church, the rights of man will supplant the rights of God through the desecration of the sacraments, the sacrilege of the sanctuary, and the abuse of apostolic power,” he added.

The faithful will know the anti-Church by its fruits, he said. It will allow politicians who “vote for abortion and same-sex ‘marriage’” to receive Holy Communion. It will likewise admit to the sacraments husbands and wives who have “abandoned their spouses and children and entered into adulterous relationships.” In the anti-Church, priests and theologians who “publicly reject Catholic doctrines and morals will be at liberty to exercise ministry and to spread dissent, while faithful Catholics will be marginalised, maligned and discredited at every turn.”

In the anti-Church, he said, it will appear as if it had succeeded in “dethroning God as Creator, Saviour and Sanctifier and replacing Him with man the self-creator, the self-saviour and the self-sanctifier.”

Clovis said that Francis’ most recent Exhortation Amoris Laetitia is an example of a force at work within the Church today that helps establish the dividing line between the anti-Church and the true Church of Jesus Christ. It has emboldened the anti-Church to come out of the shadows.

“The Apostolic Exhortation Amoris Laetitia is the catalyst that has divided not only bishops and Episcopal Conferences from each other but, priests from their bishops and from each other, and the laity, anxious and confused,” he said.

“As a Trojan horse, Amoris Laetitia spells spiritual ruin for the entire Church. As a gauntlet thrown down it calls for courage in overcoming fear. In either case, it is now poised to separate the anti-Church of which St. John Paul II spoke from the Church that Christ founded.  As the separation begins to take place, each one of us, like the angels, will have to decide for himself whether he would rather be wrong with Lucifer than right without him,” he added.

The priest said that Catholics seeking to be faithful to Christ and the Church he founded need not be afraid of the present turmoil they are witnessing.

“At Baptism we became members of the Church Militant and, at Confirmation, soldiers of Christ; we, therefore, have been recruited and armed for deadly combat against the three implacable enemies of our souls: the world, the flesh and the devil,” he said.

“Recognising that ‘we are not contending against flesh and blood, but against the principalities, against the powers, against the world rulers of this present darkness, against the spiritual hosts of wickedness in the heavenly places,’ we fight, like the Apostles, taking the martyrs for our models and Christ Jesus, Himself as our reward,” he added.