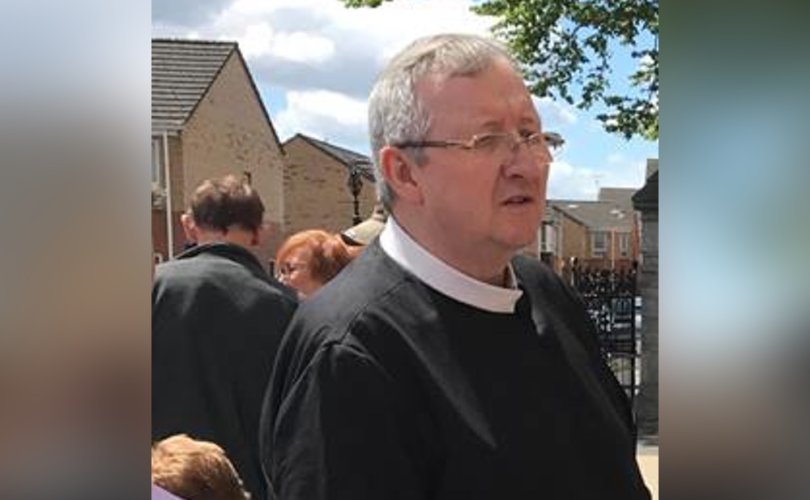 BELFAST, June 22, 2018 (LifeSiteNews) – A Redemptorist priest told thousands of pilgrims at an annual celebration of faith in Northern Ireland that Catholic doctrine under Pope Francis has undergone an “evolution” that now makes homosexual relations accepted as “normative.”

The nine-day event is put on by the Redemptorists at Clonard Monastery in west Belfast to honor the Blessed Virgin under the title of Our Mother of Perpetual Help. More than 100,000 people took part in the services. The theme for this year's Novena was “The Joy of Love: Family Life Today.” It was chosen in response to the pope’s encyclical Amoris Laetitia and to prepare for the upcoming World Meeting of Families in Dublin.

The Brazil-based priest called Pope Francis a “prophet” who from the first day of his election in 2013 began to break “old paradigms.”

“Pope Francis is very clear about the evolution of doctrine and teachings,” he said.

“He says that human self-understanding changes with time and so also human conscience deepens. We must move from a narrow view of doctrine to a more comprehensive view of doctrine,” he added.

McCarthy said that those Catholics who struggle with the direction Pope Francis is taking the Church have to overcome their “judgmental attitudes.”

“The difficulty that the Church has to accept LGBT members as equals is due to a tradition of over two thousand years in which only heterosexual relations were regarded as normative. So those who oppose any change in the Church’s attitude react as if the Pope was betraying the Church.”

The priest said that homosexuals are “born that way.” He praised the Pope’s new teaching on homosexuality.

Speaking of homosexual couples, McCarthy said, “In his encyclical The Joy of Love [Amoris Laetitia] the Pope teaches that people that are in so-called ‘irregular situations’ can still live in the grace of God, they can still love, and they can also grow in the life of grace and love, and receive for this the help of the Church, which may also include the sacraments.”

“Like Jesus, the Church cannot discriminate against anyone on grounds of sexual orientation,” he said.

“What is at stake is…the right of gays to be protected by civil law and to educate their children, if they have children, in the Christian faith.”

“Also at stake is the combatting of homophobia, which is a grave sin,” he said.

“The real sin is to accept the mechanisms of exclusion and proceed to select humans by biological, racial, sexual, or ethnic factors,” he added.

There is no scientific evidence that anyone is born “gay.”

The Catholic Church teaches that homosexuality is one of the four sins that cry to heaven for justice.

The Catechism of the Catholic Church states that “basing itself on Sacred Scripture, which presents homosexual acts as acts of grave depravity, tradition has always declared that ‘homosexual acts are intrinsically disordered’. They are contrary to the natural law. They close the sexual act to the gift of life. They do not proceed from a genuine affective and sexual complementarity. Under no circumstances can they be approved” (CCC 2357).

In a 1986 letter to bishops about how to care for persons with same-sex attraction the Church stated that “special concern and pastoral attention should be directed toward those who have this condition, lest they be led to believe that the living out of this orientation in homosexual activity is a morally acceptable option. It is not.”

Catholic philosopher Dr. Josef Seifert has warned that Amoris Laetitia a ticking “theological atomic bomb” that has the capacity to destroy all Catholic moral teaching.