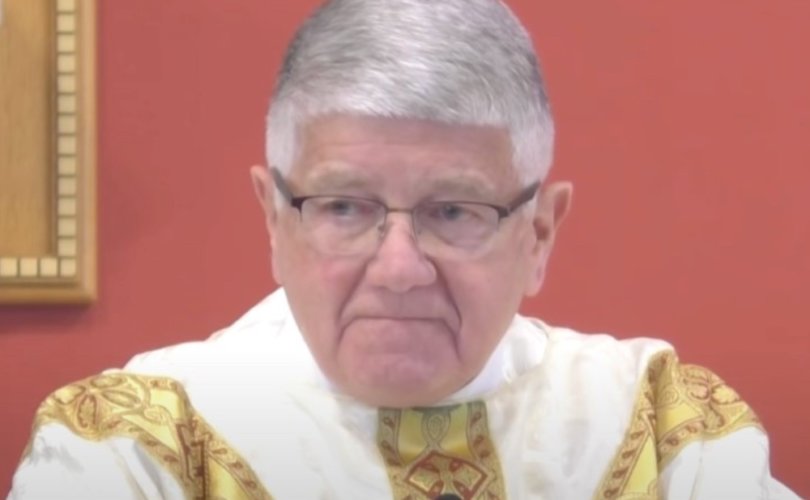 TOWSON, Maryland (LifeSiteNews) – A Catholic priest has slammed vaccine mandates from the pulpit, saying that “no earthly king or president…gets to dictate what we must put into our bodies.”

The homily which was later publicly attacked by LGBT activist Father James Martin as “moronic.”

Addressing his congregation at Christ the King Church in Towson, Maryland, Father Edward Meeks of the Ordinariate of the Chair of Saint Peter used Catholic doctrine to defend the right of bodily autonomy through his homily.

Speaking on the feast of Christ the King, November 21, Meeks reminded the congregation that “you and I belong to another realm, another kingdom. This earthly kingdom, this earthly realm is not our home; it is part of our journey.”

Mentioning the “ongoing conflict” within the human being, Meeks noted that in saying that “Jesus is our Lord and King, what we’re saying is that we owe our allegiance and our loyalty first and foremost to Him and to His kingdom.”

“So then how does this principle work itself out in our daily lives, practically speaking?” he asked rhetorically.

Drawing from Scripture, Fr. Meeks defended the right of individuals to refuse forced medical intervention, saying that the body must be cared for since it is a “temple of the Holy Spirit”:

Our King tells us in His written word that our bodies … are temples of the Holy Spirit. First Corinthians, 6:19: “Do you not know that your body is a temple of the Holy Spirit within you, which you have from God? You are not your own, you were bought with a price, so glorify God in your body.”

Among all the other things that that implies – if you do, if you do take it seriously – is this: that no earthly king or president or public health official or billionaire technocrat gets to dictate what we must put into our bodies – into these temples of the Holy Spirit.

At this, Meeks’ congregation gave their pastor a round of applause.

Meeks further noted that “it was easier for a Christian living today in a repressive, totalitarian regime to maintain that perspective of the heavenly kingdom than it is for us.”

Despite this seeming “paradox,” Meeks explained that “modern Western culture” distracts Catholics from giving their “attention or affection” to God while those in anti-Catholics times or societies were daily faced with having to “profess…Christ is king.”

“There was little or nothing in the societies of ancient Rome, or of the Soviet Union, or today in radical Islam to compete with the Christian’s attention or affection, but there is much in our modern Western culture of freedom, peace, and prosperity to attract us and thus to distract us from our allegiance and responsibilities to the One who we verbally confess as Lord.”

— Article continues below Petition —
HELP AUSTRALIANS restore their freedom by protesting outside YOUR Australian Embassy - Dec. 4th - US
Show Petition Text
7002 have signed the petition.
Let's get to 7500!
Thank you for signing this petition!
Add your signature:
Show Petition Text

While not mentioning them by name, Meeks appeared to be alluding to the abortion-tainted COVID injections, promoted by Pope Francis as a “gift of love” and mandated by politicians in countries around the world.

Such a reference was noted and strongly protested by pro-LGBT Jesuit, Father James Martin, who took to Twitter to call Fr. Meeks’ words as “moronic.”

This is, to use some theological language, moronic. It’s not just about your own Temple of the Holy Spirit, i.e., your own body; it’s about other people’s bodies, too. Vaccines save lives. As Pope Francis (Fr. Meeks’ boss) has said, getting vaccinated is an “act of love.” https://t.co/ma1DitIOQi

Meeks’ homily was a contrast to Pope Francis’ interview with Italian television channel Canale 5 in January, during which the pontiff called taking the injection “an ethical choice because you are playing with health, life, but you are also playing with the lives of others.”

Shortly afterwards, Vatican City mandated COVID inoculations for Vatican employees; those who refused the shot would be moved to different professional roles.

Pope Francis then stipulated that all reporters on his Iraq trip must be injected and provide proof of their COVID-19 injection, meaning that any unjabbed reporters would not be allowed to accompany the Pope on the journey.

Along with Pope Emeritus Benedict XVI, Francis was reportedly one of the first to receive the vaccine when injections began in the Vatican in January.

However, in a paper released on December 12, 2020, Bishop Athanasius Schneider and co-signers Cardinal Janis Pujats, Bishop Joseph Strickland, and Archbishops Tomasz Peta and Jan Pawel Lenga expressed their strong conviction that any use of a vaccine tainted with the “unspeakable crime” of abortion, under any circumstances, “cannot be acceptable for Catholics.”

The prelates pointed to the contradiction between Catholic doctrine, which teaches that abortion is “a grave moral evil that cries out to heaven for vengeance,” and the commonly found view that vaccines resulting from abortion-derived material are permitted in “exceptional cases of ‘urgent need.’”

Fr. Meeks is no stranger to discussing controversial topics in his homilies. In October 2020 he delivered a homily in which he described pro-abortion Joe Biden as “in very public [and] very obstinate opposition to Church teaching.”

A “Biden presidency would be a danger to our already dwindling religious liberty,” Meeks warned.