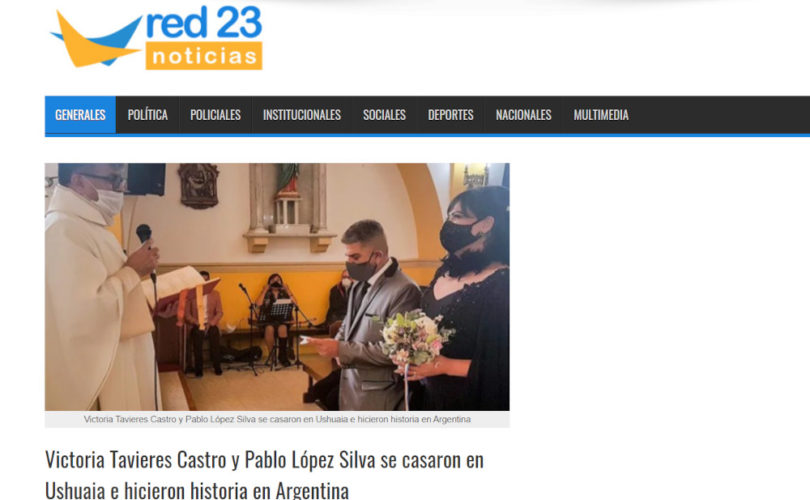 USHUAIA, Argentina, March 17, 2021 (LifeSiteNews) – A Catholic priest in Argentina has performed a Catholic “marriage” ceremony for two homosexuals, one of whom is a transgender “woman.”

On February 6, Salesian priest Father Fabián Colman joined Pablo López Silva, aged 54, and Victoria Castro, a 46-year-old male who believes himself to be a woman, in order to perform a “marriage” ceremony in the parish of Our Lady of Mercy, in the center of Ushuaia.

The pair had previously contracted a civil union ceremony in 2011, when Castro did not believe himself to be a woman. Despite this prior ceremony, Castro and Silva demanded the new ceremony — made to look like a Catholic “wedding” — due to Castro’s new belief of having a female identity. The pair, described as “a couple of Catholic believers,” have also two adopted children aged 16 and 19.

Due to the complete canonical impossibility of a true marriage occurring between the pair, the event was not registered as a marriage in the church records. Fr. Colman spoke to the pair during the ceremony, saying the Church is “for everyone” and that Castro and Silva were included in that designation.

Castro revealed to Argentinian media that he had specifically asked Fr. Colman to perform the ceremony: “We gave him the idea of doing this ceremony and he accepted. He told us that he only evaluates people’s capacity to love. Of course, he consulted with the diocese, but personally he was always predisposed in our favor.”

Castro also said the ceremony was composed of Bible readings, a homily, the profession of vows, as well as the sacrilegious distribution of Holy Communion to the pair and their guests.

“Being transsexual does not imply neither losing faith nor ceasing to be a child of God,” Castro claimed. “It is a very significant moment for the LGBTIQ+ collective, because it is a place that has been denied us, like so many other things. That is why we think of it as an act of reconciliation and as a return home, in this case the house of God.”

Believing himself to be a woman, Castro donned an all-black wedding dress, holding flowers tied by a rainbow-colored ribbon. Castro explained the peculiar choice of dress color by saying that it was a tribute to “all the companions who could not meet this dream.” Pictures of the event show all the guests in black masks also.

Since Castro and Silva both work as government officials, the provincial governor Gustavo Melella and several of his cabinet were in attendance.

While Castro mentioned that Fr. Colman had “consulted with the diocese” before witnessing the event, and though Colman evidently went ahead with the ceremony, Castro did not mention whether the diocese had given permission. Some Argentinian media wrote that the event went ahead “with the agreement of the regional bishopric.”

However, the local bishop of Río Gallegos, Jorge Ignacio García Cuerva, released a statement two days after the ceremony denying that he gave permission.

“The celebration was not authorized by this diocese,” he said. “While we accompany all people without exception in their legitimate desire to receive God’s blessing, we clarify that in this case there is no sacrament of marriage as believed and supported by the Church.”

The bishop added that Fr. Colman had “already been properly warned,” although his aides did not give any further response to questions about any canonical sanctions imposed upon him. Colman has since been removed from the parish to a new parish in the city of Chos Malal, but reports have mentioned that his removal had been announced in December and so was unlikely to be purely related to witnessing the ceremony.

The bishop’s statement was met with strong rebuke by LGBT activists in Santa Cruz, who called it “unnecessary” and accused the Church of being the “judge and executioner” of LGBT people. The group declared that Bishop García had exposed how the Catholic Church’s “‘brotherly love’ continues to be heteronormal, that they simply are a function of the patriarchy and that this is a system that oppresses us, kills us and this system continues intact in the Church.”

While the ceremony earned condemnation from the bishop, Castro, Silva and local media, hailed the ceremony as the “first of its kind in the history of the province, and one of the first in the country.”

The initial occasion of a “wedding” involving transgender individuals occurred in 2014 in Santiago del Estero, when Father Sergio Lamberti, parish priest of the Holy Spirit Parish, gave a blessing to José Leonardo Coria and Luisa Lucía Paz, the leader of the Association of Transvestites, Transsexuals and Transgenders of Argentina (ATTTA), who had been living together for 29 years.

Argentina became the first South American country to legalize same-sex “marriage” in July 2010, and in 2016 was described by pro-LGBT Washington Blade as having “one of the world’s most comprehensive transgender rights laws under which people can legally change their gender without surgery.”

A 2020 survey conducted by Pew Research Center found that 76% of Argentines thought homosexuality should be accepted by society, which was a larger figure than in the U.S., but lower than Canada and much of western Europe.

The Vatican on Monday declared that it is “not licit to impart a blessing on relationships, or partnerships, even stable, that involve sexual activity outside of marriage (i.e., outside the indissoluble union of a man and a woman open in itself to the transmission of life), as is the case of the unions between persons of the same sex.”

“The presence in such relationships of positive elements, which are in themselves to be valued and appreciated, cannot justify these relationships and render them legitimate objects of an ecclesial blessing, since the positive elements exist within the context of a union not ordered to the Creator’s plan,” the statement by the Congregation for the Doctrine of the Faith read.