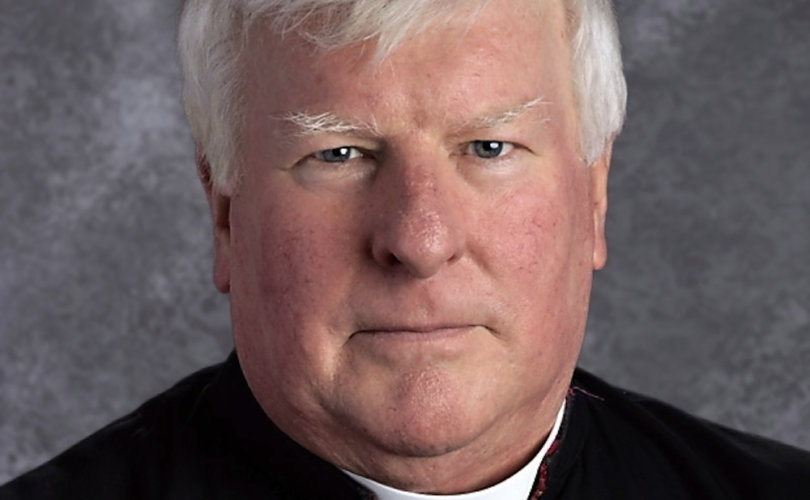 January 25, 2019 (LifeSiteNews) — A Catholic priest was the target of bigoted slurs from the radical activist group involved in the encounter last Friday between Nathan Phillips and Covington Catholic High School students – and the Covington kids reacted swiftly to defend the priest and their faith.

Monsignor Patrick Hambrough was walking back to the Lincoln Memorial to meet his group from St. Louis’ St. Mark Catholic Church after the March for Life just before the events that have since gone viral via video.

The Black Hebrew Israelites were insulting myriad groups at the time as they demonstrated near the Memorial, including other blacks, Trump supporters, gays, and lesbians.

But when they saw Hambrough, the priest said, they immediately directed their ire his way, with graphic invectives that expanded to include all priests and Catholics.

As soon as the Covington Catholic students witnessed this, Hambrough told LifeSiteNews, a group of them rushed to his side instantly to stick up for him. And in the other ruckus that ensued, he didn’t see anything from the students equating to disrespect.

The Covington boys that came over to him did not know him, but Hambrough said they told him, “We’re with you, Father, we support you.”

“The Covington Catholic High School students were willing to immediately act in defense of me and our Catholic faith,” Hambrough told LifeSiteNews.

Hambrough discussed these events with LifeSiteNews on Thursday and with Charlie Brennan on his KMOX radio program in St. Louis.

His experience with the Covington students took place just before the students were approached by Native American activist Nathan Phillips, and though he saw Phillips and another man pounding drums and chanting, he started to leave before Phillips banged the drum and chanted in Nick Sandmann’s face.

So Hambrough was unaware of the exchange when he first viewed the media coverage Sunday after he returned home. Like many others, he accepted the reports that the Covington boys were harassing Phillips.

He was disturbed, and he couldn’t believe it, he told LifeSiteNews.

While on the bus ride back to their hotel from the Lincoln Memorial on Friday evening, before he had any idea what happened, and with only his experience in mind, Hambrough had told the other chaperones on their trip how proud he was of the Covington kids.

“I was just impressed with this particular group of youngsters,” he said.

So while he later believed the media reports at first, it just didn’t add up.

“I was upset,” Hambrough recalled.

How could the same young men who were so nice to him do what was reported?

“It looked really bad,” the priest said. “It was just incredible to me. I was just questioning how it could be that way.”

“And it turned out that they weren’t that mean,” said Hambrough.

Asked about it nearly one week later, even with all that has happened since, Hambrough said the Covington Catholic boys jumping immediately to his defense as he was being verbally assailed is what still resonates with him.

“They supported me as an individual and as a Catholic priest,” Hambrough told LifeSiteNews. “I think for those guys to come over to me they way they did, that’s what sticks out, is how quickly they came over and offered support.”

Hambrough had detailed the encounter Tuesday morning with Brennan on KMOX.

Brennan noted how the Black Hebrew Israelites haven’t been called out for their behavior.

“Oh no,” Hambrough concurred. “And it got worse after that.”

“Criticism of other priests besides me – just priests in general,” he said, “and then the Catholic Church in general. We’re all child molesters, everyone born Catholic is born out of incest, things like that.”

They were also insulting a black man who was sticking up for the Catholic Church, he said, and calling him an Uncle Tom.

“It was pretty mean,” said Hambrough.

After he told Brennan he was very touched by the young men who came to comfort and encourage him in a moment when he was being insulted, Brennan asked Hambrough whether he felt those same kids were insulting and degrading Phillips as he was beating the drum among them.

“I didn’t, no, I didn’t think so,” Hambrough replied. “There was a lot of commotion going on, but I didn’t get the impression that they were doing anything mean toward him.”

He said he was slightly concerned over the chanting accompanying the drum beating, but it was more like teenagers joining along with the beat of the drum and not taunting.

Brennan questioned Hambrough about CNN contributor Father Edward Beck saying it was a mistake for the boys to be wearing Make America Great Again hats.

“No, I don’t really pay attention to the hats,” he said. “You know, people have all sorts of views on all sorts of things. And I’m not going to jump to a conclusion based on a hat.”

If he had been one of the kids, he would have just walked away, he told Brennan.

“But they’re just kids and they were reacting to the beating of the drum and to the Black Israelite guys who were so mean and saying such hateful things,” said Hambrough. “I think the main point was to drown him out.”

Hambrough expounded on this for LifeSiteNews, saying the boys trying to drown out the Black Hebrew Israelites’ slurs “was a more honorable thing to try.”

The fact that the activist group seems to be escaping criticism could stem from most people just trying to ignore them “because they’re so far out.”

Hambrough said he didn’t take what they said seriously, but they were certainly on the hunt for anyone to insult, and he was disappointed in their behavior.

It was also disappointing, he said, because some of the kids from his school were exposed to this type of behavior.

Not all of the St. Mark students witnessed the Black Hebrew Israelites’ behavior, he told LifeSiteNews, but those who did he remembers seemed to view the group’s actions as sad.

“But we’ve talked to them and let them know that this is the sadness of our world. Some people are just insulting, and we need to do better,” said Hambrough. “Like these Covington Catholic kids who stuck up for me in a moment where insults were leveled, and I appreciate their behavior and their support.”