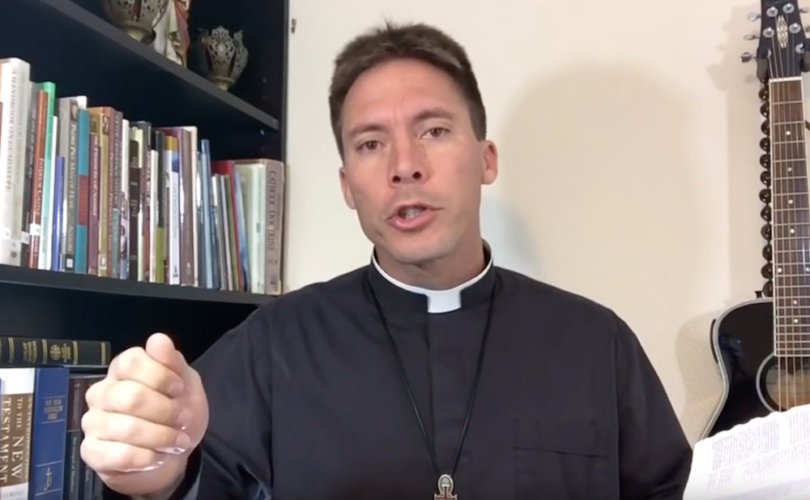 HOUSTON, Texas, October 11, 2016 (LifeSiteNews) – A Catholic priest has released a clear and concise message spelling out the culpability for Catholics and civic responsibility when it comes to backing pro-abortion candidates in an election.

“The blood of these unborn children is on your hands if you vote for and support an aggressively pro-abortion politician,” states Father Mark Goring, CC, in the video message.

There are a lot of Catholics who do so, the priest explains, something he finds “incomprehensible,” and for him this makes them stupid Catholics.

“These Catholics don’t realize that by voting for an aggressively pro-abortion politican they share the responsibility for the death of these unborn children,” he tells viewers.

The YouTube video was released August 4, before the end of primary season in the current election cycle.

Father Goring is the director of the Catholic Charismatic Center in Houston, TX, a mission of the Companions of the Cross, an Ottawa, Ontario-based Society of Apostolic Life focused on Christ crucified, spiritual life and evangelization. He is also a host for the Canadian Food for Life TV Ministry and has hosted a Bible teaching program for Radio Maria in the U.S.

In underscoring his video message on Catholics’ supporting pro-abortion politicians Father Goring quotes St. Paul’s First Letter to the Corinthians, which says that we are God’s temple and His spirit dwells within us, along with citing Jeremiah 1:5, to state, “Before I formed you in the womb, I knew you.”

He also points out how the regard for morals in society has led to Catholics succumbing to the culture and going along with supporting abortion.

“Our western world is experiencing a devastating moral decline,” Father Goring states. “One of the things that I find absolutely incomprehensible is the number of Catholics who vote for an aggressively pro-abortion politician.”

The Companions of the Cross priest closes the message with a call for Catholics to fully recognize God’s gift of life and in doing so, to not support abortion in the voting booth.

“As Catholics we need to recognize the dignity of human life and the sacredness of human life,” Father Goring implores viewers. “As a Catholic you cannot vote and support a politician who is promoting abortion. In the name of Jesus you have to vote against pro-abortion politicians.”