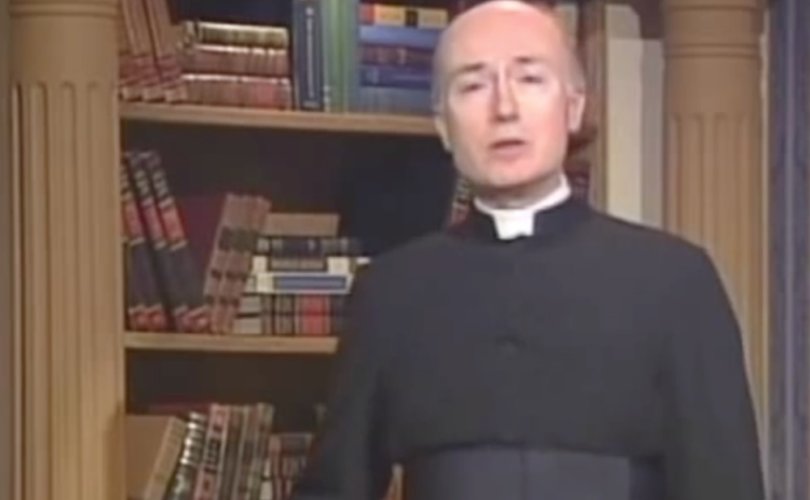 NEW YORK, New York, December 20, 2018 (LifeSiteNews) – The Vatican has become the equivalent of nuclear catastrophe in terms of its theology, a noted priest scholar said.

Father George Rutler, citing a number of Pope Francis’ statements and acts, including the pope’s recent pronouncements on the death penalty, said the Church’s highest office is diminished when its obligations to the perennial teachings of the fathers are neglected, and the faithful are also “at risk when they are offered confusion and superficiality in place of systematic thought.”

“In short,” Father Rutler said, “the Vatican has become a theological Chernobyl. We are in dangerous territory.”

Since capital punishment relates to natural law, he wrote, rejecting it as fundamentally wrong could affect any part of natural law.

Rutler, a priest of the Archdiocese of New York as well as an author, columnist, and broadcaster, wrote about Francis’ comments made on Monday to a Delegation of the International Commission Against the Death Penalty in a column for Catholic World Report.

When one reads the pope’s spontaneous remarks on varied topics today, “The quality of reasoning and information of facts is so fugitive, that frustration yields to sheer embarrassment,” he wrote.

Rutler cited for example in lead-up to his discussion of the pope’s death penalty remarks Francis’ comments to youth in Turin in June 2015. The pontiff had gone all over the map in listing concerns to the young people, he said, in an address that Reuters termed “a long, rambling talk about war, trust and politics.”

“While constrained by respect for the Petrine office,” Father Rutler said, “and aware of the strains that imposes, it is distressing to look for a train of thought and find only a train wreck.”

“That has to be the impression after reading the Pope’s remarks to a Delegation of the International Commission Against the Death Penalty,” he added.

Popes “in past centuries” ignored “the primacy of mercy over justice” in using the death penalty, Pope Francis stated Monday, also calling capital punishment an “inhuman form of punishment” that is now “always inadmissible.”

The pope had put aside his prepared speech during the private audience with the group, speaking to the anti-death penalty delegation in unscripted remarks. After the meeting, the Vatican provided the prepared address to reporters, also noting it had also been given to participants.

The pontiff’s prepared remarks ran through his varied appeals over the years in favor of abolishing the death penalty.

The remarks referenced Francis’ recent change to Catechism of the Catholic Church, which he said, “Now expresses the progress of the doctrine of the most recent Pontiffs as well as the change in the conscience of the Christian people, which rejects a penalty that seriously harms human dignity.”

In August, Francis changed the 1992 Catechism of the Catholic Church promulgated by Pope St. John Paul II, replacing n. 2267 of the Catechism with new text to say that the death penalty is “inadmissible” and that the Church “works with determination for its abolition worldwide.”

The Prefect of the Congregation for the Doctrine of the Faith, Cardinal Luis Ladaria Ferrer, S.J., argued in an accompanying explanatory letter to bishops that on the basis of the teaching of Pope John Paul II and Benedict XVI, Francis’ “reformulation” of the Catechism represents an “authentic development of doctrine that is not in contradiction with the prior teachings of the Magisterium.”

Even before his more recent death penalty statements, Francis went beyond the position held by Pope St. John Paul II and Pope Benedict XVI, who had opposed capital punishment but never considered it to be intrinsically evil.

Francis said the death penalty was “contrary to the Gospel” back in October 2017 during a speech to the Pontifical Council for the Promotion of the New Evangelization, signaling that the teaching of the Catechism would change according to a “new understanding of Christian truth.”

And in 2015 while addressing the U.S. Congress just hours before the senators of the U.S. would be voting on defunding Planned Parenthood – which was fresh off being exposed for trafficking in aborted fetal remains – Francis eschewed mention of abortion in favor of speaking against capital punishment.

St. Augustine and St. Thomas Aquinas, along with Pope Pius XII, viewed capital punishment as legitimate for protecting the public from immediate danger and as punishment for serious crimes, in keeping with Catholic tradition. The death penalty is also presented as legitimate in both the Old and New Testaments of the Bible.

Francis’ changing the Catechism to condemn the death penalty met roundly with widespread criticism for its departure from the Church’s teaching and apparent doctrinal error.

Dissident pro-LGBT “Catholic” groups saw the change as a possible in for the hope that the Church will one day also change its teaching against homosexuality, and it has been invoked by others to float changing the Church’s prohibition of abortion.

Rutler was one of 75 clergy and scholars to sign an appeal to Francis urging him to withdraw his death penalty teaching.

In his Catholic World Report column, Rutler cited varied previous Church teaching and scholars to illustrate the Pope’s parting with Church doctrine on the death penalty, also analyzing semantics of how he does so.

Francis’s use of the term “inadmissible” to describe the death penalty, he said, while “it has no theological substance,” and coupled with his avoiding words such as “immoral” or “wrong,” “inflicts on discourse an ambiguity similar to parts of Amoris Laetitia.”

“The obvious meaning is that capital punishment is intrinsically evil,” said Rutler, “but to say so outright would be too blatant.”

“He also calls all life ‘inviolable,’” the priest continued, “a term which applies only to innocent life and has no moral warrant otherwise.”

Father Rutler then listed “the ancillary and unmentioned consideration of the role of punishment and hell” in the pontiff’s death penalty presentation, “conjuring a suspicion of universalism, which is the denial of eternal alienation from God.”

Francis has discarded then-Congregation for the Doctrine of the Faith Prefect Cardinal Joseph Ratzinger (who became Pope Benedict XVI) saying in 2004 that there could be legitimate diversity of opinion on the death penalty but not on abortion or euthanasia, he said.

Rutler then quoted Vatican consultant Basilian Father Thomas Rosica’s remarks in August that Francis rules by his own personal authority.

“This is no surprise,” said Rutler of Francis’ abandoning Ratzinger’s teaching, “since an attaché of the Holy See Press Office, Father Thomas Rosica, has said in a statement ultramontane to the point of heresy: ‘Our Church has indeed entered a new phase: with the advent of this first Jesuit pope, it is openly ruled by an individual rather than by the authority of Scripture alone or even its own dictates of tradition plus Scripture.’”

‘No warrant in reality’

“Pope Francis justifies himself by invoking a ‘progress’ in society,” continued Rutler, “but this is a humanistic – even Pelagian – confidence that has no warrant in reality. It also lets loose a cataract of contradictions.”

He provided the example of how “one of the Pope’s men,” Bishop Marcelo Sánchez Sorondo, praised Communist China for coming “closer to Catholic social teaching” than the U.S.

“There were 23 executions in the United States last year compared with 1,551 in China,” Rutler added, “more than all other nations combined.”

“Pope Francis says that his innovative teaching, ‘does not imply any contradiction’ of the Church’s tradition,” said Rutler, “but, one has to say reluctantly, it indeed does.”

“The shift cannot be called a legitimate development of doctrine because it neglects all the classical criteria for authentic development,” he said, “most especially what John Henry Newman named ‘preservation of type.’”

The Newman concept refers to the later form of a teaching having the same essential characteristics as the earlier form.

“As capital punishment pertains to natural law,” said Rutler, “once it is rejected as intrinsically wrong, the same could happen to any aspect of natural law.”