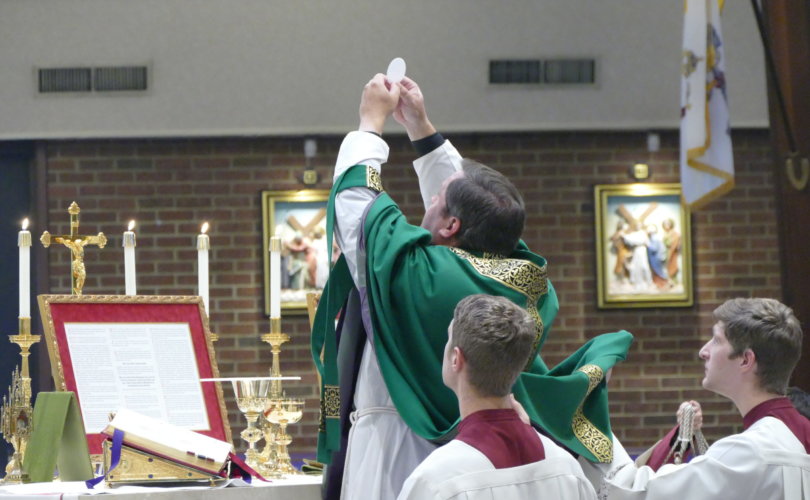 October 19, 2016 (LifeSiteNews) – Voting in the 2016 presidential election is tantamount to picking between two poisons: a deadly one or a disgusting one that will make you sick, a Catholic priest argues.

Father Christopher Pollard, pastor of St. John the Beloved Catholic Church in the Diocese of Arlington, compared voting in the 2016 presidential election to “a hostage situation in which you, the hostage, will be forced to drink one of two poisons but you get to choose which poison it will be.”

“You get to decide if both poisons are equally bad or not,” Pollard wrote for Catholic News Agency. “If one outcome will be better than the other then you should try to bring it about. It is not a moral obligation to do so in the same way that you need not say anything to the kidnappers when they show you the two poisons, of which you will have to ingest one. If one is deadly and the other only sickening then you ought to choose the latter. Before you tell them ‘ipse venena bibas’, or ‘drink your own poison’, remember that the poison will be forced down not only your throat but everybody’s, even your children’s.”

Voting is “just choosing between one of the possible outcomes, one being better than the other(s),” Pollard continued.

Pollard reiterated the Catholic Church’s teaching that voting for a candidate because he or she supports an intrinsic evil is immoral.

“This vote is not a discernment of a free moral act” because if we were freely choosing then we would be able to choose good, wrote the priest. “We always must choose good” but “we are not in that kind of situation here.”

He compared the current political situation to the one that King David faced in the Bible: he was forced to select “from among three punishments: three years of famine, three months of fleeing an invading army, or three days of pestilence (2 Samuel 24:13; 1 Chronicles 21:12).”

“In ordinary circumstances voting might be no more dramatic and fraught with moral significance than choosing a breakfast cereal at the grocery store,” Pollard explained, but if one of the cereal boxes contained rat poison “then it would be a matter of life and death.”

In this instance voting will be “a choice between two poisons,” wrote Pollard. “One of them would like to bring about the end of authentic Christianity. The other is simply disgusting. One intends to ensure that abortion, even its most brutal forms, remain legally protected. The other wants to defund Planned Parenthood. If the abortion business had nothing at stake in this race then why would Planned Parenthood give Mrs. Clinton a 100% rating and Mr. Trump 0%?”

“I am not saying you have to vote,” the priest wrote, but boycotting a vote in “a local election where a few hundred votes are decisive” is typically the most effective way to send a message.

“Vote because it will bring about the better outcome,” he concluded. “And for heaven’s sake, if you do cast a ballot, do not use it to promote abortion. If you have ever done so, please repent. The punishments for those who deliberately kill the innocent, from which God will not be able to spare the impenitent, do not expire after three days or three months or three years or ever.”