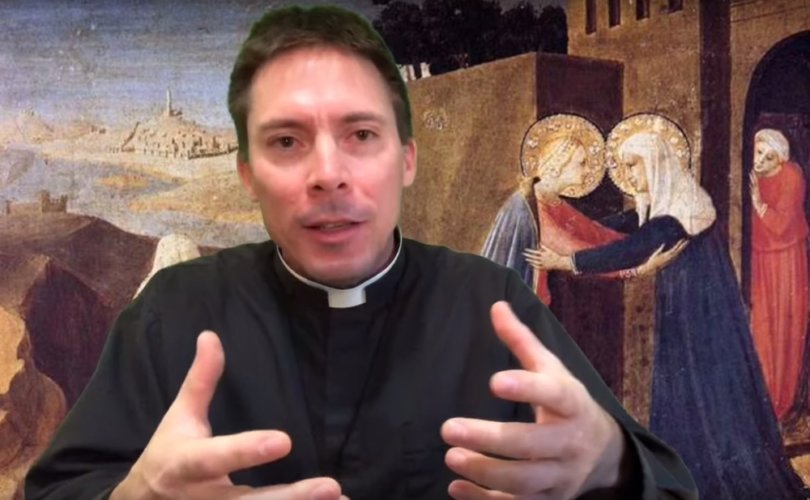 OTTAWA, October 21, 2017 (LifeSiteNews) – Catholic priest and apologist Fr. Mark Goring compared this morning’s removal and casting into the Tiber River of several replicas of a controversial naked statue, said to be Amazonian fertility goddess “Pachamama,” to the Gospel story of Jesus Christ, who made a whip of cords and angrily cast out the money-changers from the Temple and accused them of turning the holy place into a “den of thieves.”

A widely circulated video showed that at least two people entered Santa Maria Traspontina church, near the Vatican, and removed the statues and then tossed them into the Tiber River.

Fr. Goring, who is part of the Companions of the Cross community, said, “The Amazon mysterious statues, that were creating so much confusion, have been seized and thrown into the Tiber River.”

While Fr. Goring said that other religions and their sacred places should be respected, he expressed surprise that the statues had remained on display before an altar of the historic church for as long as they did. Quoting the Gospel of John, the priest recalled the story of the cleansing of the Temple by Jesus Christ, who made a whip of cords and drove the money changers out.

“‘Stop making my Father’s house a marketplace,’” Fr. Goring quoted, “‘His disciples recalled the words of Scripture: Zeal for your house will consume me.’”

The statues first appeared at an October 4 ceremony at the inauguration of the current Amazon Synod, where Amazonian indigenous and at least one Franciscan bowed to them as Pope Francis and cardinals looked on.

Vatican officials have said the statue represents “fertility” or “life,” and volunteers where the statue was on display described it as “Mother Earth” and “Pachamama.”

Fr. Goring called it “mind-boggling” that the Vatican displayed these statues yet had said it didn’t “really know” what they represented.

“There is a legitimate respect we need to show for other religions,” said Fr. Goring. “The deal with this is that – this was strange statues brought to a Catholic church. If I’m not mistaken, they were displayed in front of an altar…I’m surprised they lasted that long…I’m surprised that someone didn’t grab those things and throw them out immediately.”

“If someone were to set up a display like that in my church, I mean – I would immediately say, ‘Get those things out of here,’” he continued. “This is a Catholic church. The First Commandment is: ‘You will not have strange gods before Me.’ This isn’t the place for something like this.”

“Shame on them,” he said in of Church leaders who allowed the statues into the church in the first place. “We are talking about respecting our own Catholic faith, respecting almighty God and His commandments and the lordship of Jesus Christ,” he said.

It is the responsibility of Catholic leaders, said Fr. Goring, to follow the example of Jesus Christ and remove “inappropriate” displays inside churches: “This isn’t the place for them.”