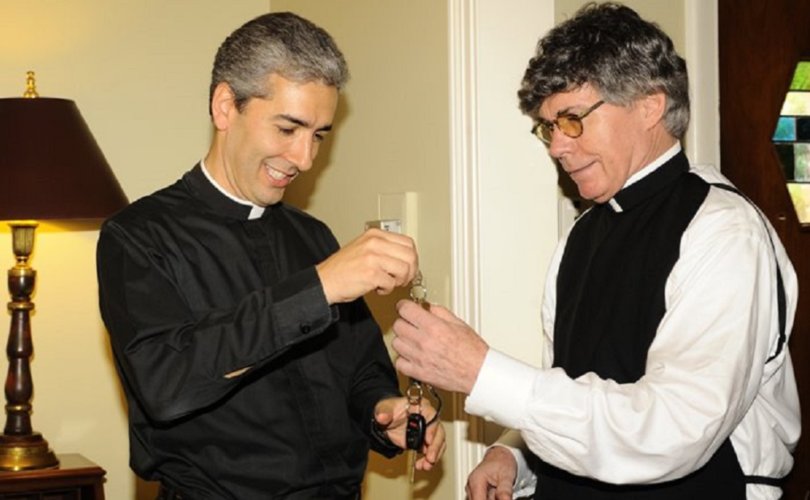 WASHINGTON, D.C., May 22, 2019, (LifeSiteNews) — A priest of the Archdiocese of Washington, D.C. has publicly rebuked the leadership of nearby Georgetown Visitation Prep for deciding to publish same-sex union announcements in its alumni magazine.

Monsignor Edward Filardi, pastor of Our Lady of Lourdes Parish in Bethesda, Maryland, penned an open letter in his parish bulletin chiding the venerable girls’ school, founded in 1799.

The Archdiocese of Washington quickly responded with a statement that it “was not made aware of the discussion of Catholic identity or the recent decision of the school to communicate the change for their alumni publication until after the letter announcing the decision was distributed to the wider Georgetown Visitation community,” according to a WTOP report. “Catholic Church teaching on marriage is clear, and it also does not conflict with the Gospel message of love.”

When no sign of repentance was forthcoming from the school, allowing confusion to linger in the nation’s capital’s Catholic community, Msgr. Filardi took it upon himself to persuade the school’s president emerita to reconsider her decision.

Here is Msgr. Filardi’s letter in its entirety:

It has been a year sadly full of scandal, so the latest news from Visitation Preparatory School is like another searing dagger to the heart.

Sister Mary Berchmans, the school’s president emerita recently sent out a letter saying that the alumnae magazine will publish announcements of same-sex unions.

Before I comment further, let me say that there are few, if any, Catholic figures in our area more widely known and revered than Sister Berchmans. In my mind she has always been an inspiring figure of presence and dignity. But this only adds to the concern that this compromise will more widely sow confusion and endanger souls.

According to a news article this decision was prefaced by a “chat group” campaign formed to “urge the school to change its policy.”

Sister, to justify this capitulation in your letter you rightly state church teaching, but then wrongly set-up a false dichotomy. You write, “The Church is clear in its teaching on same-sex marriages. But it is equally clear in its teaching that we are all children of God, that we each have dignity and are worthy of respect and love.”

You then claim to “have prayed over this contradiction.”

There is no contradiction in these two statements. And with due respect, I find it hard to believe that you do not know better.

Love is not an excuse for license, nor does love require one to condoone or comply with any and all behavior. Actually, real love does just the opposite, seeking above all the greater good of the other.

Sister, you said, “We know from history—including recent history—that the Church, in its humanity, makes mistakes.” But are not the abuses that have done so much damage due precisely to this same deceptive thinking which divides “law” from “love,” flouts facts for feelings?

Furthermore, from our Christian perspective, “in the image of God He created him; male and female he created them,” Genesis 1:27.

This match shows forth the image of God. To treat any other arrangement as “marriage” mocks God, belittles what He has created, and causes great confusion.

Sister, I am sure this decision takes a lot of pressure off of you, secures the financial fortune of your 220 year-old academy, and will make you the toast of the town. But is it worth becoming toast? And worse, leading others to the same?

Sister, you have beautifully given yourself to God and our Church in consecrated life for 70 years and have done so much good. For this I offer my highest admiration. Why betray it now?

Msgr. Filardi told LifeSiteNews that “this is the issue that will not be going away, and will continue to divide the Church until we make clear where we stand.”

“And beyond this particular situation is the loose logic, which, left to stand, becomes the template and excuse for moral abuse,” he added.

Several years ago, when Maryland lawmakers legalized same-sex “marriage” in the Old Line State, Msgr. Filardi was equally passionate about standing up for Church teaching and for protecting the community at large.

“Maryland is our home,” he wrote. “But especially now we must live upholding in word and honor the truth of marriage with clarity.

“We cannot betray what God has created without betraying God,” he continued. “This means never placating or playing along with a false notion, no matter how ‘well intentioned’ some may be. It will not be easy. We do so at the risk of the ire and even legal sanctions this will invoke.”

“The purposeful union of man and woman was the crown of God’s creation,” said Filardi.

“Anything else by that name mocks what God has created, and therefore mocks God,” he added emphatically.