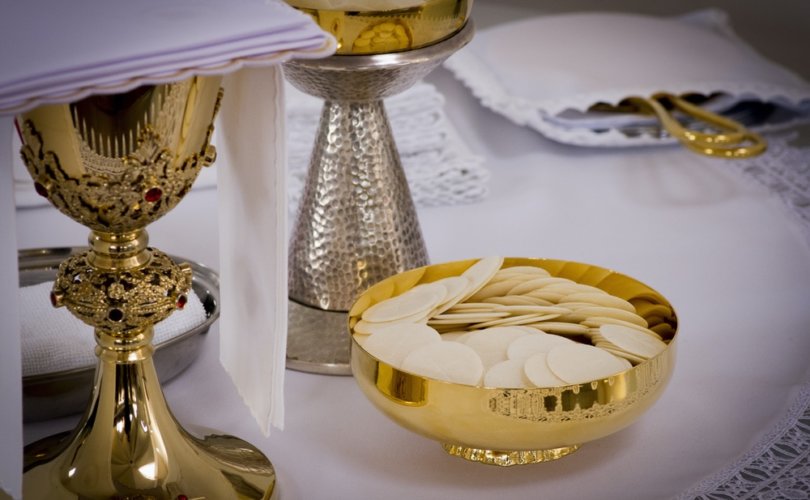 Father Michael J. Kane is the pastor of St. Augustine’s Catholic Church in Coatbridge, a town about 10 miles east of Glasgow. In a June 26 open letter to Member of Scottish Parliament (MSP) Fulton MacGregor, Kane criticized Scotland’s plans not to allow public worship until late July.

“….It is extremely concerning that there may now be some further delay in allowing the return to public worship, with the earliest date now set at 23rd July,” Kane stated.

“This despite the fact that the Scottish Government deems it safe to open pubs, restaurants, cinemas and other social venues.”

The Catholic Church in Scotland has been in communication with Scotland’s Holyrood government with its plan for the resumption of public worship. As part of “Phase 2” in Scotland’s emergence from the COVID-19 lockdown, Scotland’s places of worship were permitted to open for private prayer on June 22, provided that so-called social distancing and hygiene protocols were followed.

Public worship began again in England on July 5, with Catholic priests reporting low attendance. The dispensation of the obligation to attend Sunday Mass in England and Wales is still in effect. Private prayer in England’s places of worship was permitted beginning June 15.

Public health is a “devolved” issue, which means that the Scottish Parliament is free to determine its own lockdown guidelines independently of the Westminster government in London.

Kane informed MacGregor that the Church in Scotland has “demonstrated good practice” regarding social distancing and hygiene and objected to public entertainments taking precedence over public worship.

“It seems entirely unjustified that the leisure and hospitality sectors should re-open before places of public worship, especially given their vital importance to national life,” Kane wrote.

“Might I remind the Government of the obligation of the State to ensure freedom of worship is a hallmark of any free, democratic society, and should not be unduly restricted without good cause,” he continued.

“Politicians enter dangerous territory when they arbitrarily ban religious worship which is a fundamental human right.”

Kane addressed some of the issues that are being offered as the rationale for keeping churches (but not pubs) shut: the “aging” demographic of worshippers and a perception that the “very nature of communal worship” spreads the coronavirus. The priest reminded the government that the Church had advised those most at risk of the infection to stay at home and outlined the various measures the Church in Scotland has taken to minimize the spread of germs, including a two-meter distance between households, marshalls, and a ban on singing.

“By any measure these procedures place us in a significantly lower risk than most … establishments in the leisure and hospitality sectors,” Kane wrote.

Meanwhile, the priest believes that the Scottish government has failed to appreciate what religious observance actually means for Christians. Reflecting on the four months in which Catholics have been unable to attend Mass, Kane underscored that theirs is a sacramental religion relying on physical presence.

“It is deeply distressing that Catholics cannot receive the Sacraments,” he wrote.

“Yet our civil authorities seem entirely blind to this distress.”

The parish priest urged the MSP to convey to the authorities the dissatisfaction of the Catholic community.

“We feel that our religious liberties are not being given sufficient protection,” he wrote.

“No State should continue the suspension of public worship without serious cause. It will most certainly be a stain on this Government's reputation if people can visit a pub before a place of worship.”

Kane concluded by asking MacGregor to appeal to the Government that public religious worship be allowed to begin again “as early as safely possible.”

“The Government cannot reasonably expect people to endure the strain of this pandemic without the reassurance and strength that the Sacraments give.”

In response, MacGregor stated on Facebook that “places of worship will not likely reopen before 23rd July.” He noted also, however, that the Scottish Government will review the current protocols on July 9.

MacGregor, who is the MSP for Coatbridge and neighboring Chryston, said he would ensure that his constituents’ concerns were brought before the Scottish government.

Not all Catholics in Scotland are comfortable with the reopening of churches to public worship however. Unconvinced by the safety measures proposed by the Church, some are happy to remain at home watching live-streamed Masses rather than risk their health or the health of others.

Although Catholics comprise only 15.9 percent of the Scottish population, the Catholic Church contains the largest group of Christians who regularly attend public worship in Scotland. Only seven percent of residents of Scotland now attend public worship, a stunning decline in a country once famous for Presbyterianism and strict observance of the “Scottish Sabbath.”

The overwhelming loss of Scotland’s Christian identity, once fractiously divided between different Protestant denominations and the Catholic Church, has not ended centuries of prejudice against the Catholic minority. Despite their low numbers, Catholics represent half the victims of hate crimes in the country. These anti-Catholic attacks are not condoned by ecclesial communities belonging to the Reformed tradition; today ecumencial relationships between the formal denominations are positive.

LifeSiteNews reached out to Fr. Kane for further comment but has not yet received a response.