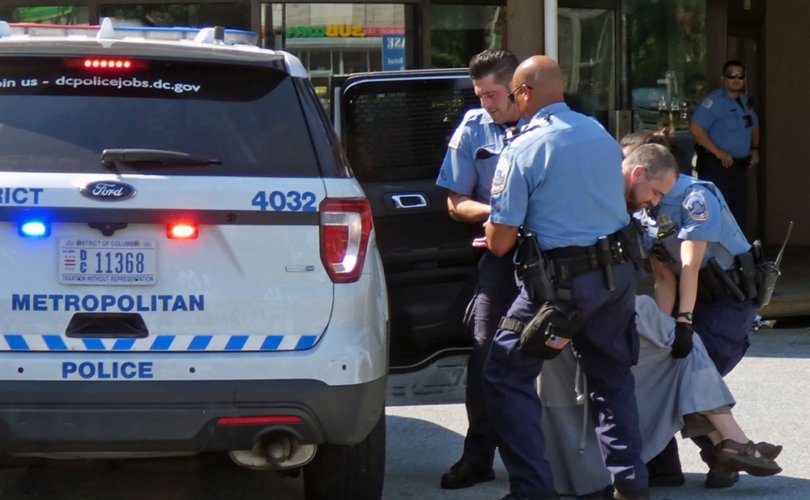 Police drag Fr. Fidelis Moscinski, CFR, after arresting him during a Red Rose Rescue on May 26, 2018.Credit: Fr. William Kuchinsky

WASHINGTON, DC, May 28, 2018 (LifeSiteNews) — A priest and three women shut down a Washington, DC, area abortion center Saturday morning for over an hour during a Red Rose Rescue.

Fr. Fidelis Moscinski, Lauren Handy, Adele Gilhooly and a woman who identifies herself as “Baby Jane Doe” entered Capital Women’s Services, an abortion center run by Steven Brigham at 6323 Georgia Ave, NW, Washington, DC, at about 9:00 a.m., on May 26.

They carried red roses and offers of support to the mothers and unborn children inside the abortion center, according to Red Rose Rescue spokesman Fr. Stephen Imbarrato, who coordinated the peaceful action.

About 15 or so people were outside, holding signs, sidewalk counselling, and praying for the rescue efforts.

“Once inside, these pro-lifers quietly speak with mothers and others seated in the waiting rooms and offer them red roses as a symbol of life,” said Imbarrato, who is with Priests for Life and has been previously arrested in Red Rose Rescues.

“In addition to reaching out to the mothers, rescuers choose to remain in the facility as an act of solidarity with the unborn children scheduled to be killed by abortionists,” he said.

On Saturday morning, the police were already on scene in two cars “when the four Rescuers walked into the building separately,” Imbarrato told LifeSiteNews.

“It took about 15 minutes before they were alerted to the Rescuers inside.”

Fr. Fidelis, a member of the Franciscan Fathers of the Renewal, Handy, and Baby Jane Doe “were in there for about 90 minutes before they were taken out by the police and arrested,” said Imbarrato.

Gilhooly, who is elderly, chose not to get arrested and left at the final warning, he said.

Because of her refusal to identify herself in solidarity with the unborn children, “Baby Jane Doe” remained in jail until her arraignment Monday morning at the U.S. District Court for Columbia, Imbarrato told LifeSiteNews.

She was released and the charges dismissed, he said.

Fr Fidelis, who has been arrested in previous Red Rose Rescues, was released Saturday “within a few hours and given a citation to appear in court.”

Handy, 24, was released and arraigned before a judge Saturday, and the charges against her were dismissed, Imbarrato told LifeSiteNews.

“There’s a report that all the charges may be dismissed,” he said.

As for what happened in the abortion center that morning, “we are speculating that there was one turnaway,” that is, a woman who changed her mind and left before having an abortion, he said.

“I am speculating, but I am sure there were people who came by car for their appointments and just kept on going,” Imbarrato told LifeSiteNews.

“The police cordoned off the property for about an hour, so they weren’t letting anyone in, at all, and there was such a scene, there were so many police cars, so many police,” Imbarrato said. “I would say there were about a dozen officers including a lieutenant and a commander.”

Another witness who wished to remain unnamed told LifeSiteNews in an email there were 12 police cars on site, including the paddy wagon.

Handy, a long-time sidewalk counsellor who has been previously arrested for Red Rose Rescues, wrote about her experience being dragged from the abortion center on a Facebook post.

“I have never felt pain like I did yesterday. Today I can’t lift my arms up, I’m covered in weird scratches from them clawing me and bruises all over BUT this is NOTHING compared to what 4000+ babies suffered yesterday,” wrote Handy.

“NOTHING compared to what Christ, my Savior, went through on the cross. I am blessed and honored to have suffered for the Unborn. I capitalize the u in ‘Unborn’ because Christ is seen in the babies when He said, ‘whatever you did for the least of these, you did to me’.”

Three other pro-lifers entered the same facility in December, 2017 for a Red Rose Rescue and are facing trial in Washington DC on June 25.

The Red Rose Rescues are modelled after the actions of Canadian Mary Wagner, who has spent nearly five years in jail for her peaceful attempts to save women and children from the violence of abortion.

Wagner, currently not in jail, has a trial July 12 for similar rescue efforts in Toronto.

On Roe v. Wade anniversary, pro-lifers appear in court for trying to save babies inside abortion center