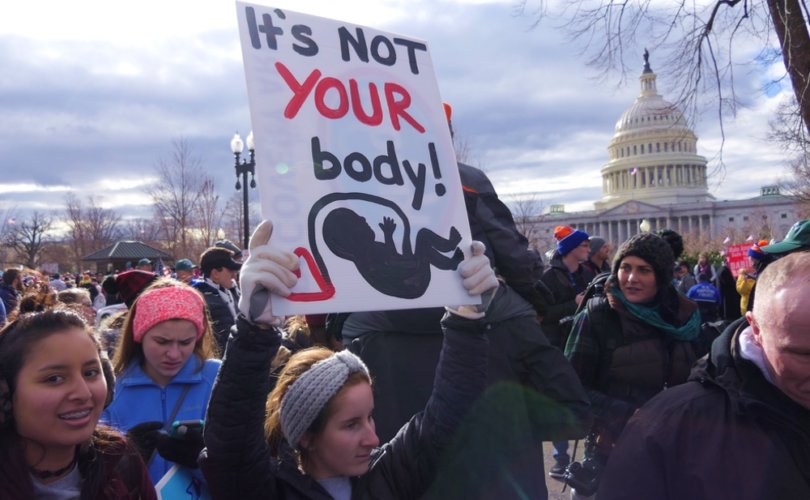 October 23, 2018 (LifeSiteNews) – In two weeks America will vote whether to keep Congress in Republican hands or return power to Democrats, and Fr. Frank Pavone wants every pro-lifer to understand the outcome will have dramatic ramifications for the country’s abortion laws.

“Pro-life people have to understand that this is the most important midterm election that we’ve ever had,” the national director of Priests for Life told LifeSiteNews. “It’s all about understanding the importance of keeping Congress and by extension the courts under pro-life influence, under pro-life control, which in today’s political climate translates into Republican control.”

Pro-lifers’ 2016 vote for Donald Trump paid off with numerous pro-life results, he said, including judicial nominees, cuts to Planned Parenthood’s federal funding, eliminating foreign abortion aid, elimination of the Obama contraception mandate, and a new focus on protecting conscience rights. But he warned that pro-lifers can’t assume they’re “set” for the next two years because Trump will stay in office.

He pointed out that major federal pro-life laws, such as the ban on partial-birth abortion, have only passed when Republicans control both chambers of Congress as well as the White House. Priests for Life has produced a simple chart detailing party control of the House and Senate since Roe v. Wade and resulting abortion legislation.

That, he argued, is why pro-lifers’ goal should be not only to maintain but to increase pro-life majorities in the House and Senate.

“Those majorities are, especially in the Senate, too close for comfort, and the stakes are too high,” Pavone explained, noting that Trump has partially defunded Planned Parenthood and is willing to sign a total defunding bill, but it’s been unable to reach his desk. “The only reason we can’t do that is not a lack of commitment on the part of the pro-life members of Congress, it’s that we don’t have enough of them,” he explained.

Current filibuster rules require most legislation to get 60 votes rather than a simple majority to pass the Senate.

Control of the Senate will also decide the future of Trump’s judicial nominees. “A lot of attention is given to the Supreme Court vacancy which we’re currently in the midst of this confirmation battle, but people need to pay more attention to the other federal courts also,” Pavone noted. Trump’s nominees have been gradually transforming the federal judiciary, but “he’s not gonna be able to get any people in there if the Democrats were to take over the Senate.”

At the same time, Pavone also said lawmakers must do their part to motivate pro-life voters, as well, particularly by following the president’s direct approach.

Trump “says ‘come on, let’s get this majority strengthened because I wanna sign legislation to protect these babies in the later stages of pregnancy,’” Pavone observed, “and if these pro-life elected officials who are up for reelection are smart, they will make this very explicit to their audiences, and say, ‘I can’t wait to vote on the pain-capable bill, I can’t wait to vote again on defunding Planned Parenthood.’”

He also stressed that voters should be aware that most of the Democrats currently up for re-election voted, in this congressional session, against banning the abortions of five-month-old preborn babies capable of feeling pain. “Challenge them publicly as to why they refuse to protect babies in the latest stages of pregnancy from painful abortions,” Priests for Life advises on a web page that helps make the pro-life case and identify how every member of Congress voted.

Pavone went on to tell LifeSiteNews that while Republicans will likely lose some House seats, it’s “by no means certain” that they’ll lose the House majority, noting that the trend of a president’s party seeing lower midterm turnout isn’t always the case, and tends to impact Democrats far more than the GOP. He also said that voter disgust with Democrats’ treatment of Justice Brett Kavanaugh will definitely drive pro-life votes, but pro-lifers shouldn’t take a red wave for granted.

“Voters who want to see fewer Democrats in office have to realize that every vote will count, because the Democrats have reasons of their own to be motivated, given that this midterm election is their way of striking back after the 2016 Election,” Pavone explained. Many races will be close, so every House race needs to be “nationalized – voters need to understand that they are not just voting for their local Republican candidate.”

“They are in fact voting for all the Republican candidates, because any one district’s election can end up being the deciding factor in what party controls the House, and therefore deciding whether any of the Republican members will even have the opportunity to vote on measures they support,” he argued. House Minority Leader Nancy Pelosi confirmed as much in April, when she reassured fellow liberals that electing pro-life Democrats would ultimately count toward a pro-abortion Speaker of the House.

Pro-abortion groups are mobilizing, as well, focusing primarily on the possibility that the Supreme Court may gut Roe v. Wade or overturn it entirely. That would simply empower states to vote directly on their own abortion laws, but abortion advocates claim it would somehow lead to a spike in women’s deaths from illegal abortions.

The political advocacy arm of the nation’s largest abortion chain has also joined a handful of other left-wing organizations in “Win Justice,” an initiative funded by left-wing billionaire George Soros targeting women, youth, and racial minorities who don’t normally vote across Florida, Michigan, and Nevada.

Priests for Life offers a variety of election resources at ProLifeVote.com, including guides to parties’ and candidates’ positions on life issues as well as to voter registration information, early voting deadlines, and where to vote; volunteer training assistance, and an inter-denominational prayer that can be freely distributed to help get people praying, thinking, and talking about the election.

“We can’t be looking back at what didn’t get done, we’ve gotta be looking at, ‘well, the reason it didn’t get done is that we don’t have as big a majority as we need to have, let’s go out and get it,’” Fr. Pavone warned. “Turn it around to a proactive motivation” to give Trump the “tools he needs” to protect the preborn.