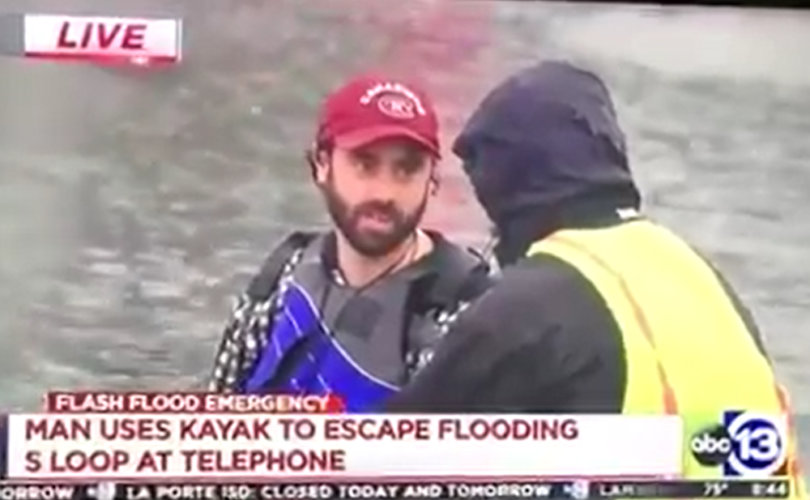 Father David Bergeron does an interview while sitting in the kayak he's using to reach parishioners in the Houston area who are stranded as a result of Hurricane Harvey.

HOUSTON, Texas, August 28, 2017 (LifeSiteNews) — A Catholic priest gave a live interview as he paddled through the flood waters to reach his parishioners.

Father David Bergeron of the Companions of the Cross is an associate director of Houston’s Catholic Charismatic Center. Marooned three miles from home on Saturday night by the flooding caused by Hurricane Harvey, the priest spent the night in his truck. On Sunday morning, he decided to journey to the Center by kayaking and portaging when he reached dry road. A keen kayaker, he already had a vessel on hand.

When Father Bergeron found some people stranded along his route, he tried to buy some wine so he could celebrate Mass with them. He was foiled by local laws prohibiting alcohol sales before noon on Sundays. Instead, he bought some food for fellow priests and while in his kayak escorted a swimmer to safety.

The French-Canadian Bergeron found his interview with ABC a teachable moment and explained that his mode of transportation was akin to the methods used by French priests before him.

“I guess this is the way the Americas were evangelized as well,” he told the ABC reporter, “with the canoe and this is a kayak. … I hope that can bring a smile to a few people, and I’m praying for everyone who is in need, obviously.”

Bergeron has been receiving text messages from parishioners who’d seen him paddling by on TV.  He told the reporter about some families endangered by the flood, and pondered psalms that mentioned rain: “but now we have enough rain, so we need to repent whatever we need to repent and go on.”

Bergeron is continuing to kayak around the area to visit his parishioners and give them hope. He tells them to be grateful to be alive and that “Jesus Christ is alive, and he is the One who wants for us to continue to have hope,” as he told the Canadian Broadcasting Corporation. “As a Catholic priest, I know that our only hope is with our Lord and Savior.”

Reflecting on heroism, like that of neighbors helping neighbors in this catastrophe, Bergeron told the CBC reporter that it was “doing little things with great love that makes [all] the difference in the world.”

He has been praying for the Coast Guard and others helping the stranded Texans and encouraged his countrymen to be in union with their suffering neighbors to the south.