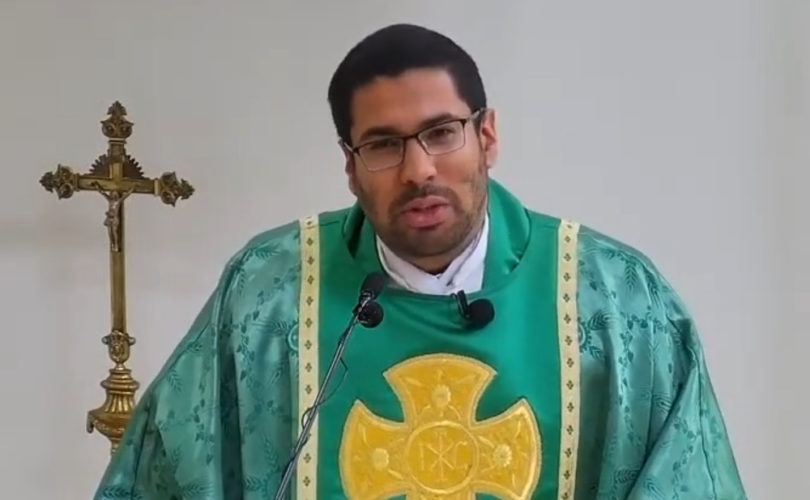 (Editor’s note: Father mentions that HEK-293 had 292 abortions before the one that worked was able to produce the HEK-293 cell line. Vaccine researcher Pamela Acker notes that this isn't quite correct – though it's certainly multiple abortions to get stem cell lines as was the case with the MRC-5, WI-38, PRC, etc. cell lines.)

TORONTO, Ontario, June 22, 2021 (LifeSiteNews) — A Canadian priest has issued a grave rebuke of what he describes as moral complicity with the organ harvesting of living babies, whose cell lines have been used to develop COVID-19 vaccines.

Fr. Dominic Clovis, IVE, in a homily at St. Augustine of Canterbury Parish in Toronto, drove home the point of the moral gravity of accepting and using such “vaccines” by pointing out that in the Nuremberg trials, doctors and scientists refused to use information obtained from the cruel human experimentation of the Nazis, because they saw it as amounting to approval of the atrocities, and thought it would lead others to copy them.

Fr. Clovis began, “Imagine you knew a store which was owned by a demon. But everything in that store was cheap. You could get great high quality products for very low prices. You get the latest iPhones for like twenty dollars, something really cheap — and get really great anti-aging cream, so you look 50 years younger, you look 20 years old again. Or super amazing medicine — he could cure you from any ailment.”

“We all know that sin is a personal act. When we sin, we personally choose to sin. However, we can be responsible for committing the sins committed by others by cooperating with them. So I don’t need to rob the bank or shoot someone if I was helping the person rob the bank and shoot them. I, by cooperating, can help them. But it’s not only directly helping.

Fr. Clovis explained that there are “four ways in which we can cooperate in someone else’s sin,” of which direct help, such as “voluntarily driving” someone to a bank robbery, is only one kind of cooperation.

“You can not only order, you could advise them, you can praise them. ‘Well done, you’ve been with so many women, you’re a great man, you’re truly manly.’ By approving we could also participate in someone else’s sin, by not disclosing or not hindering them when we have the obligation to do so.”

“We could also participate in someone else’s sin by protecting the evildoer. Thus sin makes men accomplices of one another,” Clovis continued.

“After the Second World War, there were the Nuremberg Trials. They revealed that there are doctors who had done sadistic human experiments. Sadistic since they did it because they had no problem seeing that their prisoners suffer. In fact, they even might have enjoyed it. They conducted these experiments in their camps, hundreds, maybe in the thousands.”

“They did the freezing tank experiment to find out how long a man can survive in icy cold water. He’s in the water, we take him out and see how long he survives. So if he's in the water for half an hour we take him out, shivers to death. They did these experiments because of course they wanted to see what would happen to their pilots which fell into the North Sea, how long would they survive, could they survive? What equipment they could make to help them survive … but they did this on hundreds of people.”

“They did a high altitude experiment: They lowered the pressure, giving the appearance of high altitudes. The doctor used a decompression chamber and he would often dissect, he would open up the heads of the prisoners after the experiment to show that air bubbles would start to form in the brain in hundreds of people.”

“A sea water experiment: The scientists wanted to see how long a man can live on sea water. And so they gave hundreds of prisoners sea water to drink. Sea water, being salty, dehydrates the person, so the more they drink the more thirsty they got. The more thirsty they got, the more their brains shrunk, as it got dehydrated. Their lips, their tongue, their skin started cracking. To get water, they were so thirsty, they would lick the floor and the windows.”

“Do you know what embryonic stem cell research is? It’s the research they do upon the unborn to find new medicines. Some say that, oh, they took the aborted fetuses, it’s fine, they can research on them, they’re aborted, they’re already dead, they don’t have no problem with it.”

“They take the baby out alive. They dissect the baby alive, without any anesthetics, because that would damage the cells. They would cut the child up, and they would open it up and take the organs they needed or they do it as soon as they can, as the moment they die, they take them out and then they harvest the organs of unborn children. They throw them on ice as soon as they can.”

“Why am I speaking to you about embryonic stem cell research? Because the HEK stem cell line comes from those children. What we have in our vaccines and how they were produced comes from that. You might say, oh, there’s only one aborted child [that] has produced tons of vaccines for everyone. I explain, as long as you’re beating up the same person over and over again, disrespecting the same person over and over again so that everyone else could be happy.”

“The Nazis were bad? The Chinese were bad? We just get the organs from the unborn so that we could have this magical vaccine.”

“You might say well, the Pfizer and Moderna vaccines which we use in Canada, they don’t actually produce the vaccines from the unborn, it’s not actually in the production. No, but they had taken this child’s cells for the design, for the development of the vaccine. And once it’s designed and developed, they produce it another way. Then afterwards, they test it on what? On these same stem cell lines, on this child’s cells.”

“So the question goes again, would you go to a shop which you knew was owned by a demon? You could buy the vaccine, you could buy some amazing medicines or technology. You’re buying it from a demon. So have we cooperated in this person’s sin, the abortionists, the organ harvester, the researchers?”

“We haven’t done it directly. We haven’t ordered it, we haven’t advised it, though we might advise people [to] get the vaccine. We probably praised it. Or [said], ‘This vaccine is going to save us all,’ or approved of it. We might say, ‘Yes, it’s good, it’s going to save us.’ We have not hindered it.”

“You remember that last year, there’s a lot of voices who are speaking out against the morality of the vaccine, whether it was good or not, whether we should be able to have it or not. Who were these voices? These were Catholic voices, these were … priests or lay people. These weren’t the church leaders. These weren’t the bishops.”

“I’m sorry to say this, but I believe the church leaders have failed us. Not only have they not condemned these companies — Pfizer, you are an evil company for working on the unborn, these wicked and evil experimentations — the bishops haven’t condemned Moderna. ‘No,’ they said, ‘take the vaccine, it’s your moral obligation to save your neighbor. Take it from the demon store. Step on someone else’s grave, but yeah, save yourself.’”

“This child has never been given a funeral. She’s never been able to rest in peace, this creature, this child. Was made in the image and likeness of God. Loved by God, treated like trash. The unborn are exploited. We say nothing.”

“In the Nuremberg trial, the doctors and scientists said, we will not use the information which these Nazis have made. Why? Because their experimentation was evil. And if we were to use this information then we’ll be approving of them, and other scientists will copy them.”

“In today’s Gospel we have read that the disciples and our Lord [were] on the boat, and water was entering into the boat. They were so afraid they were drowning, they called out to Christ to wake Him up.”

“Water has always been a symbol of the world. The boat of Peter was a symbol of the Church. You can see how the water of the world enters the Church, how the world enters the Church. The Church becomes more worldly. So the leaders of the Church have no problem to use the vaccines made from children. … Have you ever heard them speak against it? Have you ever heard them condemn these companies? No, they said [to] go take it.”

“If we have no problem taking a vaccine, then we’re as good as accomplices of those abortionists and organ harvesters. We’ve approved of their doing. We have not spoken against it.”

“Let us ask the Blessed Virgin Mary that we may be faithful to our Lord, but we may turn to him for help asking his grace in these trying times. May we not be deceived by the devil. Let us not make a deal with a demon. We will not live forever. We will have to face our Lord. May the Blessed Virgin Mary help us to prepare for our meeting with our Lord, and may she intercede on our behalf and may we receive mercy.”