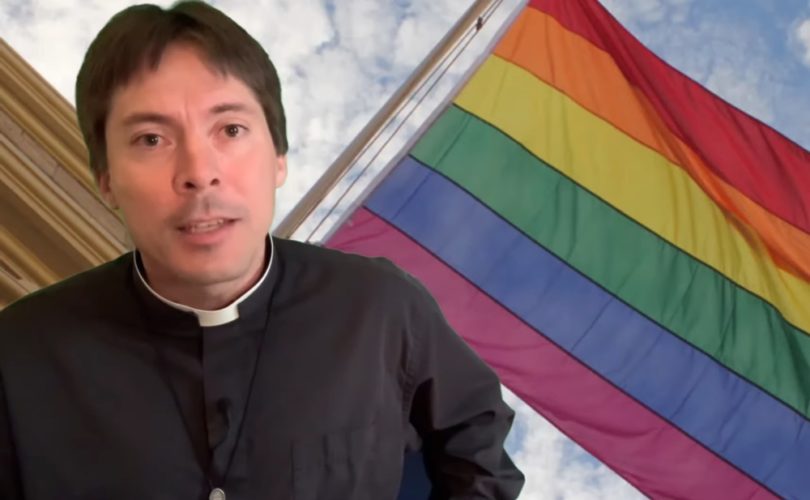 OTTAWA, Ontario, May 28, 2021 (LifeSiteNews) — A Catholic priest in Ontario is warning parents that Catholic school boards that voted to fly the pro-homosexual “Pride” flag at schools next month have become a danger to their children, and that they should consider alternative methods of education, such as private Catholic schools and homeschooling.

“So the obvious thing is if you want your children to be preserved from the ideologies of the world, you need to find an alternative,” said Fr. Mark Goring, a priest of the Companions of the Cross and current pastor of St. Mary’s Parish in Ottawa, in a May 28 Youtube video.

Goring said that children will not be deceived by the LGBT activists’ claim that the rainbow-striped flag merely represents diversity, or inclusivity, or tolerance.

“Children are very good at picking up on things. They’re not stupid. You can tell them that that little flag represents ‘inclusivity’ and not bullying people. But they know, or they’ll figure out, that that flag represents a whole lot more than that,” he said.

“I’m already hearing stories. Children as young as grade one — the first grade — [are] coming home announcing that they’re having questions, they’re wondering about their sexuality. First grade! Is that what you send your kids to school to become preoccupied with, to start questioning what letter in the alphabet soup fits them best?” he added.

The “Pride” flag was created in 1978 by open homosexual and drag queen Gilbert Baker. The flag as a whole, composed of various colored stripes, has become an international symbol of the homosexual movement and its view of the human person and sexuality that is at odds with biology, the social sciences, the world’s major religions, and specifically with the Catholic faith.

The Catholic Church warns about the spiritual dangers of homosexual behavior, teaching that homosexual acts are “intrinsically disordered.”

“They are contrary to the natural law. They close the sexual act to the gift of life. They do not proceed from a genuine affective and sexual complementarity. Under no circumstances can they be approved,” states the Catechism of the Catholic Church. The Church furthermore teaches that showing respect for people who struggle with same-sex attraction “cannot lead in any way to approval of homosexual behaviour or to legal recognition of homosexual unions.”

Doctor of the Church St. Peter Damian warned that homosexuality is a “diabolical” corruption of God’s plan for sexuality between a man and a woman. “This vice is the death of bodies, the destruction of souls, pollutes the flesh, extinguishes the light of the intellect, expels the Holy Spirit from the temple of the human heart, introduces the diabolical inciter of lust, throws into confusion, and removes the truth completely from the deceived mind…It opens up hell and closes the door of paradise … It cuts off a member of the Church and casts him into the voracious conflagration of raging Gehenna,” he wrote in his 11th century Book of Gomorrah.

Fr. Goring made his comments in reaction to the Ottawa Catholic School Board voting earlier this week to fly the rainbow-colored flag, beginning at the board’s education center this year and moving on to flying the flag at all schools the following year in the month of June. The board’s trustees voted 9-1 to fly the flag despite local Archbishop Marcel Damphousse warning them at a meeting prior to the vote that the homosexual “Pride” flag is a “political statement that endorses behaviors and lifestyles contradicting the Catholic Church’s teaching.”

The priest said in his video that he expects to see more and more parents choosing alternative methods of educating their children. “The private Catholic schools are going to grow. We’re going to help raise money for our private Catholic schools [which] are faithful to the gospel of Our Lord Jesus Christ so that they can continue to grow and that our children can have a formation that is according to the values and the morals taught by the Lord Jesus Christ.”

Goring told LifeSiteNews that his biggest concern about seeing the “Pride” flags flying at Catholic schools is that they will confuse young people about the Church’s moral teaching.

“The ‘Pride’ flag represents to young people sexual ideologies that contradict the natural law and the teaching of Our Lord Jesus Christ. The ‘Pride’ flag ideology can sow seeds of confusion that can prevent a young person’s sexuality from maturing properly, he said.

The priest said that bishops need to come out strongly against what is happening to Catholic schools under their watch.

“Shepherds need to speak boldly and clearly against ideologies that can confuse our young people and lead them astray. Shepherds could write a statement in their bulletin denouncing bad decisions made by school boards. They can work with teachers and pastoral workers in schools to bring in good evangelization and catechesis programs. We can support private schools and homeschooling programs. We can make sure to give solid teaching from our pulpits and in our youth groups. Priests could band together and figure out a way to apply pressure to school boards to be faithful to the teachings of Our Lord Jesus Christ.”

Fr. Goring said that Catholic boards that continue to disregard Catholic teaching should be stripped of their Catholic label.

“I heard from a teacher from a Catholic School board who said she’s been crying and having trouble sleeping since the decision was made by the school board. If faithful Catholics are not willing to fight for their schools, then yes, the ‘Catholic’ label should be removed. It would be sad, though, if we let a small group of radicals take over our schools,” he told LifeSiteNews.

He encouraged Catholic parents to speak up on this issue.

Parental rights group Parents as First Educators is organizing car rallies on June 1 to protest “Pride” flag-raising ceremonies at the above-mentioned Catholic school board offices. The group is also organizing 10-person rallies at the Niagara Catholic board office as well as schools that will take place on May 31 at 6:30 p.m. Contact information for more details about the events can be found below.

In his video, Fr. Goring said that he cared enough about the people for whom he is spiritually responsible to raise his own voice on this matter.

“Let it be one hundred percent clear: I’m angry about what our Catholic school boards are doing, the direction they’re taking. I’m one of the priests who care enough to be angry and to be willing to say something. We don’t throw stones at people, we don’t condemn and judge people, but we do form our young people according to the morals taught by the Lord Jesus Christ. We don’t apologize for that,” he said.

For Catholic boards, car rallies will be held from 1 p.m. to 1:30 p.m. on Tuesday, June 1, at the following locations:

Halton Catholic District School Board (did not agree to raise the flag, but has approved LGBT indoctrination to students)
802 Drury Lane, Burlington
PAFE contact: [email protected]

In addition to the June 1 rally, 10-person rallies will be held in Niagara at the Niagara Catholic board office as well as at all Niagara Catholic high schools on the evening of May 31 at 6:30 p.m. People who wish to drive by in solidarity are also welcome to join.

“Please make respectful signs for your cars and leave them at the board when the rally is over. Someone will collect them and bring them to the board.”