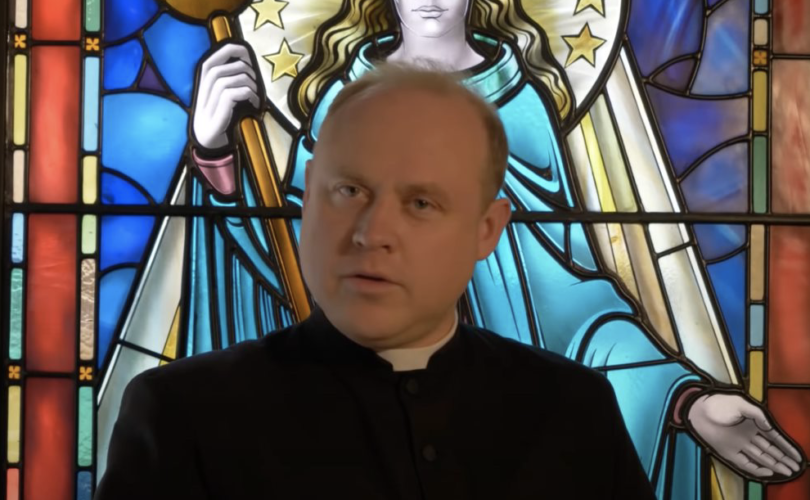 LOS ANGELES, California (LifeSiteNews) – The California priest who successfully took Gov. Newsom to court over his “unconstitutional” church lockdowns has described the governor’s COVID-19 injection mandates for schoolchildren as a “criminal action against the rights of parents.”

Father Trevor Burfitt of the Society of St. Pius X (SSPX) made the remark while speaking to LifeSiteNews’ Alejandro Rodriguez in his church, Our Lady of the Angels, Los Angeles.

California’s Democrat State Governor Gavin Newsom recently announced a vaccine mandate for all K-12 students in public and private schools, while not having had his 12-year-old daughter injected at the time of the mandate.

“I see this as very criminal, [and] I told my faithful such,” said Burfitt of the mandate. “It’s a very criminal action against the rights of parents who should be able to determine what their children receive for medical care or therapy, and it’s obviously what they are gearing for, all of this time.

Decrying the mandate as “another very large disappointment,” Burfitt suggested that Gov. Newsom is attempting to have the state at the “forefront” of the new, vaccine mandated society.

“He [Newsom] wants, it seems very clear, to be on the forefront of making this mandate, as though … it makes California somehow special,” he said.

“I think it’s very, very invasive and very harmful to the family’s rights and to the good of the children’s health.”

Burfitt expressed his hope, however, that the Our Lady of the Angels Academy, a SSPX-run K-8 center of learning, would escape the mandates.

“It’s geared towards public schools and private schools, but we hope to keep going and doing what we’re doing by God’s grace and by His protection, so I hope it’s not going to affect us,” he said.

The priest made headlines after he challenged Newsom’s church lockdowns in court. Burfitt gained, first, a preliminary and, months later, a permanent injunction against the measures that had placed churches under more severe restrictions than “essential businesses.”

Burfitt’s parishioners later faced “harassment” from Los Angeles health officials when they entered the church, treatment the judge “deemed unconstitutional,” and in May 2021 the Thomas More Society secured the settlement for Fr. Burfitt.

Describing the implications of the permanent injunction, Burfitt noted that it safeguards the right of the church to “choose what we do in order to protect our faithful” should there ever be a “serious health concern.” It also prevents Californian officials from treating the church less well than businesses.

Since then, “we’ve had no opposition, no pushback, from the state, the county, or the city,” said Burfitt.

In fact, Our Lady of the Angels church has flourished, the priest attested. A year after his legal battle to keep his church open, Burfitt is now welcoming both old and many new parishioners, with “about 3 registrations a month from different families that want to join the parish, for obvious different reasons.”

“They want the Mass – the Latin Mass in particular – and then they want the whole life that goes with it,” he said.

A lack of similar growth in other Catholic parishes could be due to a lack of “pastoral zeal” in other clergy, mused Burfitt. While commending fellow clergy for having “a good sense of obedience” during the lockdowns, the priest suggested that they also had “a lack of a true pastoral zeal.” Without this quality, “it’s easy to just want to take the easy route, protect themselves, and be less likely to sacrifice themselves for the faithful.”

“And I’m sorry, but that’s kind of been engendered in priests over the last 50 years,” the priest added.

“Rather than a real pastoral spirit, it’s been more this [philosophy]: ‘I’m in this position. It’s my job: I’m on for a few hours and off for a few hours’.”

Such an attitude and “spirit” has “really not been helpful to the faithful, and to the apostolate,” Burfitt observed.

The Latin Mass is needed for effective change

“Priests need to have better community life,” stated Burfitt when asked what most important changes are needed in the modern Church.

“They need to have their fellow priests to support them,” and “say their prayers together as much as they can,” he added.

The priest praised the initiative of SSPX founder Archbishop Marcel Lefebvre in having formed an order centered on “community life” to support its priests.

“It’s where it’s all at because from that flows everything. So prayer life, Latin Mass, and then being ready to say ‘no’ where they see it’s harmful to the faithful.”