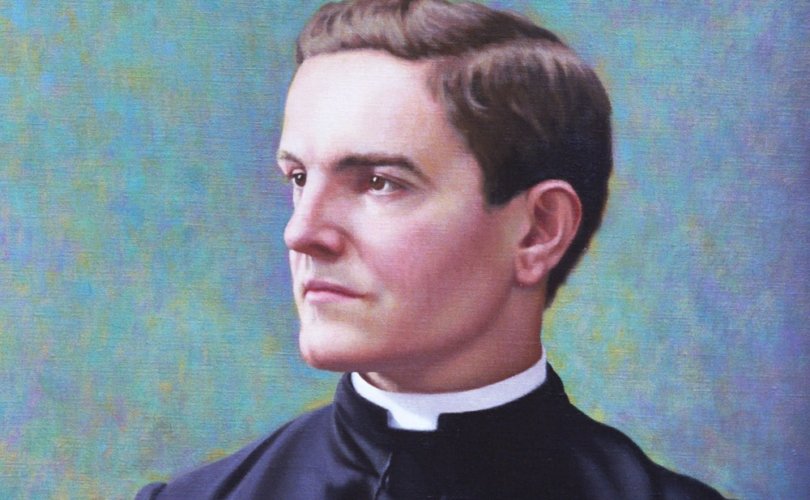 DICKSON, Tennessee, June 26, 2020 (LifeSiteNews) – Knights of Columbus founder Father Michael J. McGivney will be beatified after the Vatican approved the inexplicable healing of an unborn baby as a miracle attributable to him.

When Michelle and Daniel Schachle learned of Michelle’s pregnancy, they prepared to welcome their thirteenth child. At an ultrasound on the last day of 2014, Michelle learned that her baby had Down syndrome.

The doctors saw other troubling signs and referred Michelle for more tests. On February 25, 2015, the doctors told the Schachles that their child suffered from a severe case of fetal hydrops, a life-threatening condition of an abnormal buildup of fluids in the tissue around the lungs, heart, or abdomen or under the skin.

Daniel asked the doctor for a percentage on the chances their son would live. The doctor finally admitted that in her 30 years as a doctor, she had never seen anyone survive.

Michelle recalled the doctor telling her that “to have hydrops and a chromosomal diagnosis together, it’s over.” The doctor suggested inducing labor or “letting nature take its course.”

“I didn’t like either one of those decisions,” Daniel said. “It made me mad. My job as a dad is to protect my children, not to kill them.”

Continuing the pregnancy would also cause serious conditions for Michelle. Having previously delivered a stillborn, Michelle was “so afraid of delivering another baby stillborn.”

After hearing the diagnosis, Daniel told Michelle, “Father McGivney needs a miracle. I just prayed that if Father McGivney saves him, I'm naming him Michael.”

As members of the Father McGivney Guild, an organization promoting canonization of the priest since 1997, the family had a long-time devotion to Fr. McGivney. Daniel worked for the Knights of Columbus, founded by Fr. McGivney, and had previously been Grand Knight of his local council. The Schachles named their homeschool the “Fr. McGivney Academy.”

“We’ve worn out his prayer card over the years,” said Daniel. “We knew that [Fr. McGivney] looked out over our family, and we looked to him a lot and asked him to pray for us.”

‘There are so many coincidences, how can you look at this and not know it was Fr. McGivney’

Four days after returning from their pilgrimage, Michelle went for an ultrasound. “I was pretty scared,” Michelle said. “The ultrasound technician, she kept looking and looking, she was taking a long time.”

However, when the technician showed Michelle an ultrasound picture of the baby's face, the swelling and fluid buildup, which had been so apparent on the last ultrasound, was gone.

Dr. Mary-Anne Carroll came into the room to discuss the ultrasound with Michelle. The two had never met. Michelle had dealt with other doctors on her previous visits.

“She started talking about this and that, about what we're going to do when the baby is born,” Michelle said. “I said what about the fluid in the lungs? She said, ‘A lot of babies have a little fluid in the lungs. It's called wet lungs.’”

“Wait a minute, I was told there’s no hope,” Michelle asked, stunned.

Carroll, realizing that Michelle and her baby were the patients she had heard about from the other doctors in the practice, consulted her colleagues who confirmed the complete disappearance of fetal hydrops.

While the family had originally planned to name their baby Benedict, when he was healed, they decided to name him Michael in honor of Fr. McGivney.

Michelle delivered Michael McGivney Schachle by emergency c-section after only 31 weeks. On May 15, 2015, Michael was born, weighing only 3 pounds 4 ounces. He was then in the hospital for 10 weeks.

At seven weeks, Michael underwent heart surgery, and, at six months of age, he suffered from a respiratory illness for which he was sent to the hospital for six weeks. However, Michael is now a happy and active five-year-old. There are no signs of conditions related to his prematurity or fetal hydrops.

The Schachles said that having Michael strengthened their prayer lives, and also made a “big impression” on his doctors.

“There were times where [the doctors] were like, ‘We don't know what's going to happen and [if] he's going to make it or not,’” Michelle said. “And I'm like, ‘I don't think you understand, God has big plans for this child.’”

The family was repeatedly asked why they didn’t pray for Michael to be cured from Down syndrome as well as from the fetal hydrops. They explained that they saw a baby with Down syndrome as a “blessing” and only wanted him to be born alive.

The family was asked how they could be certain that the miracle was caused by Fr. McGivney’s intercession. In addition to praying and asking people to pray specifically for his intercession, Michael and Fr. McGivney share many similarities.

“There are so many coincidences, how can you look at this and not know it was Fr. McGivney,” said Daniel.

Michael was born on May 15, the date in 1882 when the first Knights of Columbus council was chartered. Additionally, Michelle and Fr. McGivney share a birthday. Fr. McGivney was the oldest of 13 children; Michael is the youngest of 13.

“A panel of physicians in Rome examined the medical record and a panel of theologians examined the spiritual record of the case before making a recommendation for the pope’s approval,” said Brian Caulfield, the vice postulator of Fr. McGivney’s cause.

On May 27, 2020, Pope Francis confirmed that Michael’s inexplicable healing was a miracle that arose through the intercession of Fr. McGivney. Therefore, Fr. McGivney will be beatified and called Blessed Michael J. McGivney.