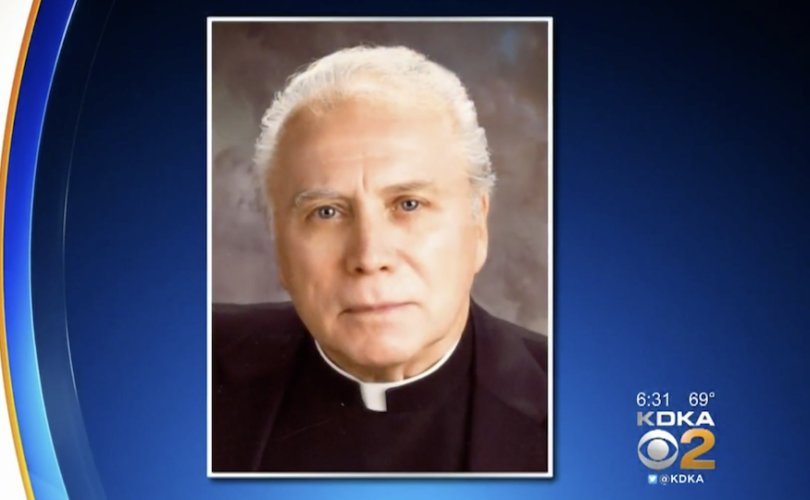 PITTSBURGH, Pennsylvania, August 22, 2018 (LifeSiteNews) – A Catholic priest who admitted to giving a 16-year-old boy pornography and condoms during the 1980s was until three months ago still offering Mass in parishes in the Diocese of Pittsburgh.

The Diocese of Pittsburgh was aware of the actions of this priest, Father Richard Terdine, but only removed him when it discovered his misconduct made it into the Pennsylvania grand jury report on more than 300 priests and minors they allegedly sexually abused.

“A Ministerial Assessment Board Report dated April 9, 2003 detailed an allegation that Father Richard Gerard Terdine abused a 16-year-old boy who worked part-time at the rectory of St. Peter's church,” the grand jury found. “The report revealed that in December, 1988, Terdine touched or patted the genital area of the boy on two-to-three occasions, gave the boy an x-rated videotape to watch, provided him with condoms, and massaged his back.”

According to the diocesan records the grand jury obtained, Terdine “denied any sexual touching of the boy” but admitted to giving him condoms and pornography. Terdine “stated that he wanted to educate the boy because he seemed naïve about human sexuality.”

The Catholic Church teaches that pornography is a “grave offense” because “it does grave injury to the dignity of its participants (actors, vendors, the public), since each one becomes an object of base pleasure and illicit profit for others” (CCC 2354).

The Church teaches that artificial contraception is “intrinsically evil” (CCC 2370). It also says that parents are the primary educators of their children.

The report detailing the abuse allegations against Terdine was dated 2003, but indicates the priest was being investigated and evaluated about this at least as early as 1990, when now-Cardinal Donald Wuerl was bishop of the diocese.

On May 11, 1990 the Diocese of Pittsburgh was provided with an assessment of Fr. Terdine from St. Luke Institute, where many of its priests accused of sexual abuse were sent. St. Luke determined Terdine was “at very little risk of acting out sexually,” demonstrated “good impulse control and a very high need to comply and obey.”

“While not illegal or immoral, it was poor judgement for Father Terdine to massage the young boy's neck,” the diocesan review board concluded, and it was “immoral” for the priest to purchase the condoms and pornography.

Under Wuerl, so as not to compromise the Diocese of Pittsburgh’s “moral integrity,” Terdine was assigned to be a hospital chaplain rather than parish priest.

But a 2003 diocesan review cleared Terdine to offer Mass, KDKA CBS Pittsburgh reported, “So even when he retired in 2009, Terdine continued to serve Mass as a fill-in priest around the diocese; and until recently, was at St. James Catholic Church in Sewickley.”

Bishop David Zubik removed Terdine from this role when he discovered Terdine’s record, known by the diocese, was publicly available in the grand jury report.

Msgr. Lengwin told KDKA, “probably, if we were reviewing this case today, we would make a different decision,” but said, “a full psychological assessment that said he could be returned to ministry and that’s what we went with.”

“Things are changing in life, the way we look at things, and certainly, this is one of the things were looking at differently,” Msgr. Lengwin said.

In what some are calling the “Summer of Shame” for the Catholic Church, the Pennsylvania grand jury report was released after it was revealed that now ex-Cardinal Theodore McCarrick was a serial sex abuser of boys and men, including seminarians and priests. McCarrick was tasked with publicizing the Catholic Church’s clean-up of its pederasty problem in 2002.

Cardinals Sean O’Malley of Boston and Donald Wuerl of Washington, D.C. (and formerly Pittsburgh) have pulled out of their scheduled appearances at the Vatican-sponsored World Meeting of Families in Dublin this week. Both face questions about what they knew of McCarrick’s predation. O’Malley is also dealing with sexual harassment allegations against the rector of his St. John’s Seminary. After his name appeared more than 200 times in the grand jury report, a Catholic book publisher “indefinitely” postponed the release of Wuerl’s latest book, What Do You Want to Know?, and the Diocese of Pittsburgh removed the cardinal’s name from one of its Catholic high schools.

Meanwhile, Cardinal Joseph Tobin of “nighty-night, baby. I love you” fame has instructed priests in his Diocese of Newark, formerly led by McCarrick, not to speak to media after a lengthy Catholic News Agency exposé on a “gay sub-culture” amongst the clergy there.