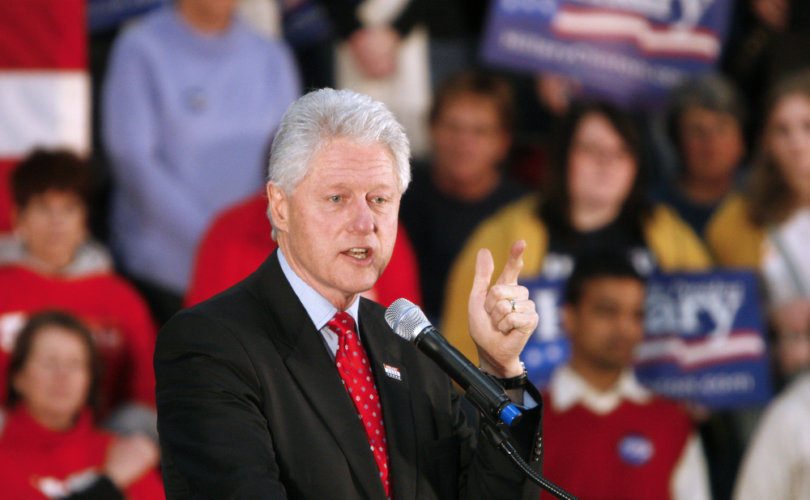 April 22, 2016 (CardinalNewmanSociety) — The rector of the Jesuit community at Loyola Marymount University (LMU) in Los Angeles, Calif., thinks LMU is justified in honoring the life of former President Bill Clinton as long as it’s clear that the University is ignoring all of the immoral and evil actions committed in the past, and present, by Clinton when bestowing that honor.

The student-run Los Angeles Loyolan recently reported that Father Allan Figueroa Deck, S.J., rector of the LMU Jesuit community, responded to protests and criticisms of LMU’s honoring of Clinton by expressing his full support of the decision.

“In conferring this honor LMU does not endorse all of Mr. Clinton’s past or current policies nor condone all his actions,” Fr. Deck stated. “Rather, the University recognizes the extraordinary service he has given to civil society and his lifetime connection to Catholic and Jesuit higher education as a Georgetown University alumnus.”

LMU President Dr. Timothy Snyder touted Clinton in the commencement speaker announcement as “one of the great statesmen of our time.”

“His commitment to improving the lives of other people, during and beyond his career in U.S. politics, embodies the ethos of becoming women and men with and for others. President Clinton will inspire our graduates as they seek to lead lives of meaning, purpose, and global impact,” Snyder continued.

The Cardinal Newman Society called the University’s choice to honor Clinton as its commencement speaker a betrayal of LMU’s Catholic mission.

“Former President Clinton is an extremely poor choice for honor and presents a very bad moral example to LMU’s students. … Clinton’s record is one of scandal,  and support for the destruction of innocent human life,” the Newman Society stated. “And his Clinton Foundation continues to partner with and fund some of the largest organizations around the world dedicated to snuffing out babies in the womb — such as Planned Parenthood.” Since leaving the White House, Clinton has also expressed strong support for same-sex marriage and worked to overturn marriage laws.

“The affront is all the greater, as Clinton is in the midst of an active presidential campaign to elect his wife Hillary, who is an even more vigorous proponent of abortion and same-sex marriage,” the statement continued. “In this context, there can be no separation of former President Clinton from his wife’s presidential race, and the University’s choice for commencement speaker will reasonably be perceived as a partisan, political act.”

The group RenewLMU, dedicated to strengthening LMU’s Catholic mission and identity, pointed out in their petition protesting the commencement honor that Clinton’s positions on abortion are “incompatible with LMU’s Jesuit emphasis on social justice for all human beings.”

[T]he U.S. Catholic Bishops , “Failing to protect the lives of innocent and defenseless members of the human race is to sin against justice. … Catholic institutions should not honor those who act in defiance of our fundamental moral principles. They should not be given awards, honors or platforms which would suggest support for their actions.” A politician’s extraordinary service does not constitute an exception to this  since any politician who is being considered for an honor presumably has exemplary service in at least some respects.

Fr. Deck’s response to RenewLMU’s criticism attacks a straw man. No one thinks that to grant an honorary doctorate is to endorse all of a politician’s policies or to condone all the politician’s actions. Nor is the question whether the politician provided extraordinary service or attended a Jesuit university. The question is whether President Clinton’s policies and actions violate fundamental Catholic moral principles about partial birth abortion, perjury, obstruction of justice, and sexual harassment in the workplace.

“The answer is obvious,” the statement concluded.

The Newman Society called on LMU to rescind the invitation to Clinton, and “to a conversion of heart and mind, and to a renewed dedication to the mission of Catholic education.

“This begins with sincere efforts to teach and not oppose Catholic teaching, both in the classroom and by the University’s public witness.”