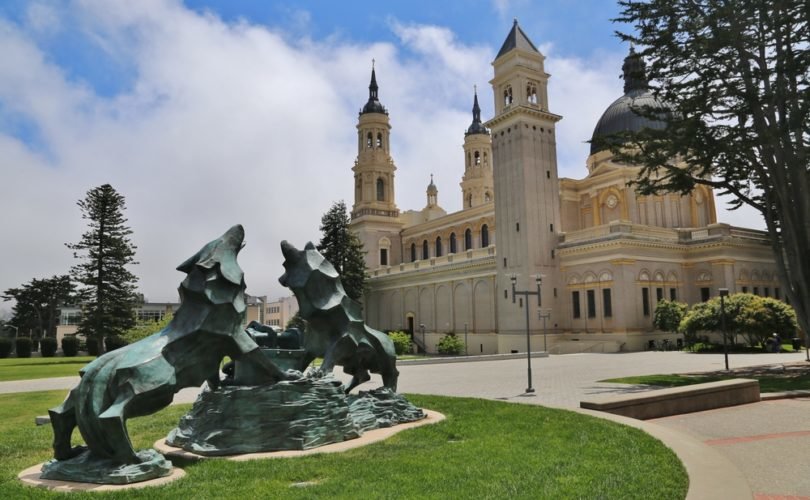 April 19, 2016 (Cardinal Newman Society) — University of San Francisco (USF) President Father Paul Fitzgerald, S.J., was reportedly “quick to offer congratulations” to two USF women’s basketball coaches who recently went public with their same-sex marriage. Fr. Fitzgerald previously told The Cardinal Newman Society that the University “does not endorse views on marriage that are inconsistent with the teaching of the Church,” but all of the statements from USF officials so far are very positive and supporting of the coaches' relationship.

During an Anti-Defamation League awards ceremony on March 31, USF’s head women’s basketball coach Jennifer Azzi publicly announced that she was in a same-sex marriage with her top assistant, Blair Hardiek. At that time, The Mercury News reported that the University’s athletic director, Scott Sidwell, offered his public support to Azzi: “At USF, we respect the dignity of each person … We are a community of inclusive excellence. We have a commitment to Jennifer, to our students, our staff, women’s basketball program, and the athletics department.”

Now the San Francisco Chronicle has reported that Fr. Fitzgerald is also supporting Azzi and Hardiek in their same-sex marriage.

“USF President Paul Fitzgerald did not know Azzi and Hardiek were married, but was quick to offer congratulations the day after Azzi’s announcement,” the newspaper reported.

“Coach Azzi has entered into a civil marriage according to the laws of the land,” Fr. Fitzgerald stated. “We will afford her every benefit and legal protection which she is due. The university is a Catholic Jesuit institution that is purposefully diverse and dedicated to inclusivity.”

“Fitzgerald added that he had received just one negative response to the news, balanced against a flood of more positive feedback from the USF community,” the report continued.

Sidwell told The Chronicle, “I’m super proud of Jennifer as a leader and a coach. Our university is a place of inclusive excellence. We’ve had a tremendous outpouring of support.”

The Newman Society contacted University officials when the news first broke about Azzi’s announcement, but never received a response.

Fr. Fitzgerald’s positive statements about the same-sex marriage between Azzi and Hardiek are concerning considering the Catholic Church’s teachings about marriage and chastity and the responsibility of a Catholic university to communicate Church teaching.

In July 2015, the Newman Society contacted USF about a tweet from their official Twitter account celebrating the U.S. Supreme Court’s decision in favor of same-sex marriage. The tweet used the hashtag “LoveWins,” created in support of same-sex marriage. The full message read: “Supreme Court legalizes gay marriage nationwide in the wake of #SFPride: sco.lt/55xpGz – @UST_LTMC #LoveWins.” Fr. Fitzgerald responded, calling the message “erroneous,” and rightfully said such relationships are “inconsistent with the teaching of the Church”:

While the university deeply respects and promotes the innate dignity of all gay and lesbian students, faculty, staff, and alumni as they are created in the image and likeness of God, it does not endorse views on marriage that are inconsistent with the teaching of the Church.

The university regrets any misunderstanding caused by the erroneous post and will provide closer oversight over posts on official social media platforms in the future.

Now it seems Fr. Fitzgerald and the University have backed away from that defense of marriage. A request to USF officials to provide clarity on Fr. Fitzgerald’s comments to The Chronicle received no response by time of publication.