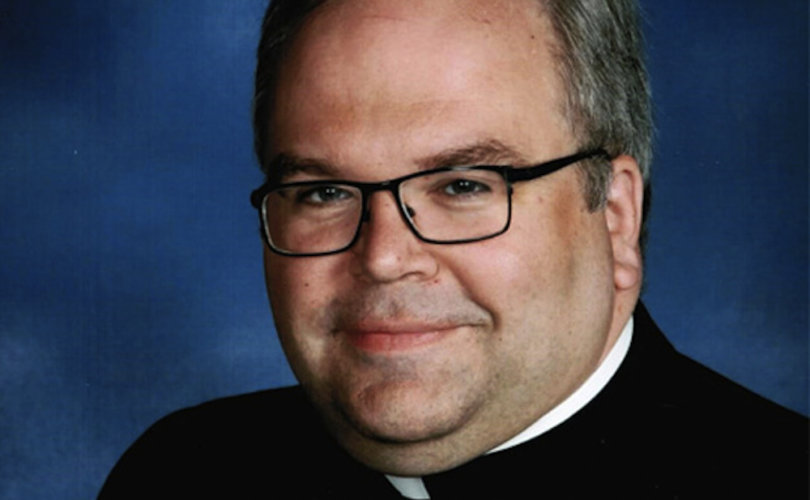 (LifeSiteNews) – The head of the Church’s apostolate to same-sex attracted Catholics striving to live chaste lives has penned a blistering open letter to leading European prelates who have called for changing the Church’s teaching on homosexuality.

Father Philip G. Bochanski, executive director of Courage International, addressed his letter, published by CNA, to German Cardinal Reinhard Marx and Cardinal Jean-Claude Hollerich, S.J., the Archbishop of Luxembourg, begging them not to violate their oaths to uphold Church teaching.

“When each of us was preparing for ordination, like all of our brother deacons, priests and bishops, we made a public Profession of Faith and swore an Oath of Fidelity,” wrote Fr. Bochanski. “When we took that oath, we swore in regard to such teachings that we would ‘hold fast to’ the Church’s doctrine, ‘faithfully hand it on and explain it, and … avoid any teachings contrary to it.’  We invoked the Holy Trinity and the holy Gospels to witness to our honesty and sincerity.”

“Your Eminences, I beg you, please be faithful to your oath,” he pleaded.

“To violate your oath over this teaching would do great harm to the very people you sincerely want to help,” explained Fr. Bochanski. “To violate your oath would also wound our brothers and sisters who strive to live chastely in harmony with the Church’s teaching,” and “would certainly harm the moral credibility of the Church, in the eyes of the faithful and in the opinion of the world.”

Fr. Bochanski’s letter follows close on the heels of Texas Bishop Joseph Strickland’s public call for the resignation of Cardinal Marx for denying that homosexual activity is sinful.

“Cardinal Marx has left the Catholic faith. He needs to be honest & officially resign,” said Bp. Strickland in a March 31 Twitter post.

Bp. Strickland’s call for Marx’s resignation was likely triggered by a report the day before in the German magazine Stern, in which Marx declared, “Homosexuality is not a sin.”

In February, the dissident German prelate, a close adviser of Pope Francis, demanded changes to the Church’s teaching on sexuality, supported the ordination of homosexuals to the priesthood, and suggested that clerical celibacy should be dropped.

Last month, Marx celebrated a Sunday Mass for the “Munich Queer Community” to mark the group’s 20th anniversary, saying, “I wish for an inclusive Church.”

Cardinal Hollerich, president of the Commission of the Bishops’ Conferences of the European Community and Relator General of the Synod on Synodality, called for a change in the Church’s teaching on homosexual acts in February.

Asked by reporters how he approaches the Church’s determination that homosexual acts are sinful, the cardinal said, “I believe that this is false,” because “the sociological-scientific foundation of this teaching is no longer correct.”

As a priest engaged for many years in pastoral ministry to people who experience same-sex attractions, I read your recent public comments about Catholic teaching on homosexual acts with serious concern.

You suggested, Cardinal Hollerich, that “the sociological-scientific foundation of” the Catholic doctrine that homosexual acts are immoral “is no longer correct,” and you called for “a fundamental revision of Church teaching” and “a change in doctrine.” You took the same stance on this issue, Cardinal Marx, and justified your position by remarking that “the Catechism is not set in stone” and that “one may also question what it says” on this important moral teaching.

Yet the paragraph of the Catechism to which you refer presents this teaching in a remarkably firm way. That is, it notes that the teaching is clearly based on Sacred Scripture and consistently taught by the tradition of the Church (no. 2357). This invocation of Scripture and Tradition is unusual in the Catechism, but appears often when the Church explains the charism of infallibility. Its use here clearly means that this teaching, which flows from the anthropological fact of the nature of sexed human bodies, is an infallible teaching of the ordinary universal magisterium.

When each of us was preparing for ordination, like all of our brother deacons, priests and bishops, we made a public Profession of Faith and swore an Oath of Fidelity. When we took that oath, we swore in regard to such teachings that we would “hold fast to” the Church’s doctrine, “faithfully hand it on and explain it, and … avoid any teachings contrary to it.” We invoked the Holy Trinity and the holy Gospels to witness to our honesty and sincerity.

Your Eminences, I beg you, please be faithful to your oath.

To violate your oath over this teaching would do great harm to the very people you sincerely want to help. “Neglect of the Church’s teaching prevents” these brothers and sisters of ours “from receiving the help that they need and deserve,” as the Dicastery for the Doctrine of the Faith wrote in 1986. To claim that this definitive teaching can change raises false hopes among our brothers and sisters, and is sure to leave them feeling more overlooked and resentful each time the Church faithfully restates it. By reinforcing this misunderstanding of the divine ordering of sexuality, you encourage them to seek happiness in relationships that ultimately cannot satisfy, rather than to seek fulfillment in chaste friendships.

To violate your oath would also wound our brothers and sisters who strive to live chastely in harmony with the Church’s teaching, or to encourage their loved ones to do so, at the cost of great personal sacrifice. They look to the bishops of the Church as their spiritual fathers, and seek from you affirmation and support for the commitments to chastity they have made, as faithful Catholics. When they hear you suggest that such commitments are unnecessary, they feel unseen and disrespected by the very people whose love and care they seek the most.

To violate your oath would certainly harm the moral credibility of the Church, in the eyes of the faithful and in the opinion of the world. On the eve of His Passion, Our Lord’s sincere prayer was for unity among his apostles, “so that the world may believe” (Jn 17:21). You stand in the place of those apostles and have undertaken the awesome responsibility of closely advising the successor of Saint Peter. Your public dissent from the Church’s teaching can only create confusion and division among the faithful, and be a scandal to the secular world.

To violate your oath would, I fear, also create great harm for you. As a brother priest and collaborator in the sacred ministry, may I be so bold as to remind you, with great respect and fraternal concern, of the solemn significance of the oath we have taken? To break an oath is to commit the sin of perjury, and to deliberately persist in such a grave sin puts one’s eternal salvation in jeopardy.

It has been my privilege for almost half of my life to serve Christ’s Church as a priest, and an immense joy for more than half of my priesthood to serve Catholics who experience same-sex attractions and their loved ones. It is a great consolation to carry out this ministry with the support and encouragement of the universal Church and its eminent pastors.

Your Eminences, I beg you, please be faithful to your oath.