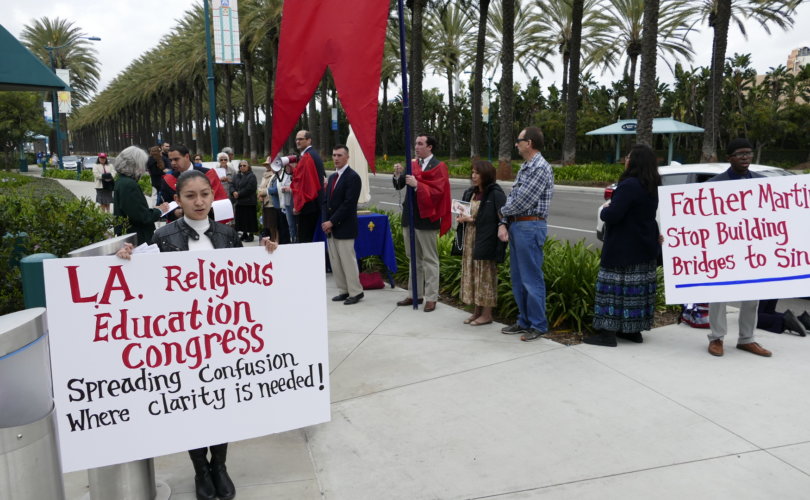 February 10, 2020 (Joseph Sciambra) — From February 21–23, 2020, during the annual Los Angeles Religious Education Congress (LA REC), the artwork of gay iconographer William Hart McNichols will be displayed in the “Arena Lobby” at the Anaheim Convention Center. McNichols is a self-outed former-Jesuit gay priest. According to Kittredge Cherry, author at the LGBT spirituality website QSpirit, which often features McNichols’ work, “… McNichols is a New Mexico artist and Roman Catholic priest whose gay-positive icons have caused controversy.”

Through his official social media accounts, Jesuit James Martin (who has spoken on the LGBT issue at the LA REC from 2018–2020) has repeatedly praised and recommended the work of McNichols. In a Facebook post from Martin, dated January 23, 2018, he announced that a then upcoming book would feature the work of McNichols who paints in a style reminiscent of Byzantine icons. Martin wrote:

Dear friends: I thought I might start recommending some new books that you might enjoy…Here’s a new one about someone whose work many people on this page enjoy: the Rev. William Hart McNichols, the great iconographer. A new book, “Image to Insight,” collects many of his most beautiful icons and pairs them with reflections by the philosopher John Dadosky, along with a foreword by Mirabai Starr. If you’re a fan of Father Bill’s amazing art I’ll bet you’ll enjoy this book, which is published by the University of New Mexico Press.

McNichols entered the Jesuits in 1968 and was ordained in 1979. In the early 1980s, he volunteered with the dissident group Dignity and worked with AIDS hospices in New York City. Like a number of priests in that era, who were drawn to AIDS ministry, though their work was highly admirable, these priests were often conflicted and either “came-out” as gay or began to disregard Catholic teachings on homosexuality; for example, fellow Jesuits Robert Carter and John J. McNeill. In 1989, McNichols contributed to Jeannine Gramick’s book “Homosexuality in the Priesthood and the Religious Life” which also contained contributions from gay historian and gay-marriage advocate John Boswell; at the time, Gramick was the subject of a lengthy Vatican investigation which later demanded the discontinuation of any involvement with her ministry to the “gay” community; she disregarded the directive. In 2017, James Martin called for the canonization of Jeannine Gramick.

Concerning Gramick’s book, and the entire push for gay-affirmation in the Catholic Church, in 1990, the late Richard John Neuhaus wrote:

The campaign in the church for homosexual rights, as they are called, is by its own definition a frontal attack on church teaching and practice and on cultural patterns that the church is thought to have blessed in the past. Homosexuality in the Priesthood and the Religious Life (edited by Jeannine Gramick, Crossroad) is a useful guide to the campaign’s developing attitudes, arguments, and strategies. It contains eight essays by proponents of a radically changed approach to homosexuality, and fourteen chapters of testimony by lesbians and male homosexuals in the priesthood and religious orders.

In 2002, McNichols spoke out against any sort of association between the burgeoning gay-priest child sex abuse scandal and homosexuals in the priesthood; he said in an interview:

The outcast status of gay people can provide them with a natural bent toward listening. They can be reconcilers; they can understand the sufferings of both sexes. They’re natural priests.

We’re all sort of like Anne Frank’s family, up in the attic, waiting for the Nazis to come. And that’s wrong…The Church of Christ should not be a fearful place.

Also, in 2002, McNichols resigned from the Jesuit Order, but remains a priest in the Archdiocese of Santa Fe.

Although his abilities as an iconographer are notable, McNichols’ choice of subject matter remains highly problematic. He has painted images of non-canonized individuals as Saints, including the controversial anti-war and gay-activist Berrigan brothers, murder-victim Matthew Shepard, an anonymous gay priest at Sachsenhausen, Zen-Buddhist teacher Maura Soshin O’ Halloran, and the Buddha himself. But his most controversial work (pictured above) is probably a drawing from 1986 entitled “AIDS Crucifixion” which depicts Christ on the Cross wearing modern men’s underwear being mourned by His Mother, a young blonde-haired St. John, and Mary Magdalene in a low-cut sleeveless dress; above the body of Jesus reads a sign: “AIDS, homosexual, faggot, pervert, Sodomite.”

In 2010, according to Cherry Kittredge, who is also the author of the homoerotic novel “Jesus in Love,” McNichols’ “agent” granted her permission to repost the picture of the “sodomite” Christ to her blog. Several paintings by McNichols were featured in Kittredge’s 2007 book “Art That Dares: Gay Jesus, Woman Christ and More.”

The “queer” Christ meme is one that has found extensive favor in gay-affirmative Catholic circles and ministries; proponents include James Martin, the Franciscan Friars of the Holy Name Province, and the LGBT ministry (Out at St. Paul) at St. Paul the Apostle Church in New York City.

The LA REC annually features a number of Catholic LGBT activists who speak at the Congress; they include gay priest Bryan Massingale, Chris Ponnet, and Arthur Fitzmaurice.

In 2017, Bishop Robert Barron, who also speaks every year at the LA REC, told gay journalist and podcaster Dave Rubin, when he was questioned about same-sex marriage:

Although Dave Rubin seemed genuinely interested in what the Church teaches, at best, Barron was reluctant to go any further with the discussion.

According to Barron’s 2017 book, To Light a Fire on the Earth: Proclaiming the Gospel in a Secular Age, taking his cue from Pope Francis, Barron wants to deemphasize the so-called “sexual issues.” He said:

He’s [Francis] not soft on transgenderism or same-sex marriage, but he’s changed the subject. It’s Gallipoli: Look we’re getting mowed down over here. We’re not making any progress, so maybe let’s bring some men and material elsewhere in this grand struggle. That’s what I see him doing, and it strikes me as just the right move.

At recent LA RECs, the issue of immigration and the environment have taken center stage, including an address in 2019 by former Archbishop of LA Cardinal Mahony on “Volatile Immigration Issues” and in 2017, “a multimedia ecological art exhibit about caring for Mother Earth, based on Pope Francis’ encyclical on the environment, ‘Laudato Si.’”