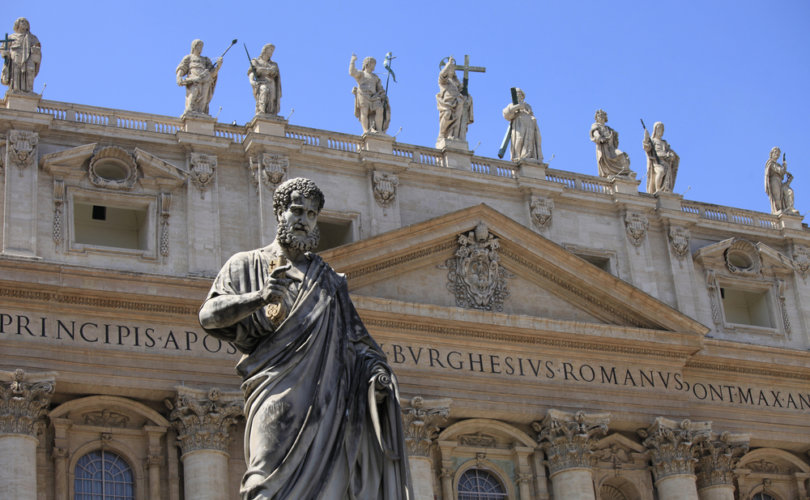 BUCKFAST ABBEY, England (LifeSiteNews) — The number of signatories of the Filial Correction charging Pope Francis with spreading seven heresies, at least by omission, has now risen to 245 professors and clergy. That is up from 62 at the time of its publication on September 24, and 40 when it was delivered to Pope Francis on August 11 at his Santa Marta residence.

Critics of the Filial Correction have accused the signatories of standing as “judges over the Pope,” of using the “wrong method,” and of contravening a Vatican instruction for theologians.  Most recently, a group of predominantly German-speaking critics have set up an alternative website in an attempt to counteract the Correctio’s worldwide media impact.

But one American Catholic priest and canon lawyer who signed the Filial Correction says his decision was “the Catholic thing to do.”

LifeSite sat down with Cleveland-raised Fr. Anthony Pillari, who serves as the chaplain for the Extraordinary Form and the Promoter of Justice in the Diocese of Plymouth, England. While attending the 2017 Fatima Centennial Conference held at Buckfast Abbey in Devon, he shared his reasons for putting his name to the Filial Correction.

LifeSite: Fr. Pillari, what led you personally as a Catholic priest to take the step of signing the Filial Correction?

What do you mean in saying that “it’s the Catholic thing to do”? Some have criticized the Filial Correction signatories as using “the wrong method” and have characterized it as an attack against the Pope.

Well, simply because Sacred Scripture and the Doctors of the Church indicate that this is the Catholic approach. It’s true that many Catholics mistakenly think that to be a good Catholic means that no matter what happens, you should never publicly in any way disagree with the Pope, or criticize him or, in the words of St. Thomas Aquinas, publicly “rebuke” the Pope.

A good Catholic — if we listen to Sacred Scripture and to Doctors of the Church like St. Augustine and St. Thomas Aquinas — realizes that we need to show any authority in the Church great respect, great love, and great obedience, but that that respect and love at times can call us even to, in the words of St. Thomas Aquinas, publicly rebuke our prelate, publicly rebuke the one in authority over us. We have the great example of St. Paul in Galatians. St. Paul says that he withstood Peter, opposed him to his face, because Peter stood condemned. So Paul gives us this example of having to oppose even the first pope to his face because he stood condemned.

After him, St. Thomas Aquinas, who is the great Common Doctor of the Church, gives what is perhaps the clearest exposition when he says: “If the faith were endangered, then a subject should rebuke his prelate even publicly.” Aquinas says this was the example given to us by St. Paul and St. Peter where, because of the imminent danger of scandal concerning the faith, Paul rebuked St. Peter publicly.

And so St. Thomas Aquinas is telling us, every Catholic, that though it’s a very painful thing to do it’s not simply an option; it can even be a duty.

Is the faith really endangered to the point where a rebuke was necessary?

Yes, I would say that the faith really is endangered.

Someone might raise the question: is this simply an academic matter for theologians to work out the details of? But in fact it’s not uncommon for priests to experience people coming to them and saying: “Well, Father, even though I’m not married to the one I’m living with, now the Church has said this is okay; now I can receive Communion.”

There is tremendous confusion among Catholics at the very ordinary level, and even among bishops. You have bishops in one diocese in the US who will say receiving Communion, if you’re living with someone you’re not married to and living as husband and wife, would be a mortal sin. You have other dioceses where bishops are saying that’s not the case. You have different countries where bishops’ conferences are giving different interpretations. And so these are very serious matters, because our mission as priests is to help everyone reach heaven, and that means passing on faithfully what Jesus taught in the Gospel.

There’s confusion over a very basic point that He was very clear on — that any man who divorces his wife and marries another commits adultery. When asked the path to heaven, He said: If you want to go to heaven, keep the commandments — the Ten Commandments. So these are very important matters that have to be clarified and that did call for this type of a public step.

You mentioned St. Thomas Aquinas’ statement about the conditions under which a subject might have to correct a prelate even publicly. Has anyone else spoken in similar terms?

Yes, there are a number of authors. Of course, Scripture itself, St. Augustine, St. Gregory the Great, Isidore of Seville, the great canonist Gracian, but also St. Robert Bellarmine.  In fact, Bellarmine gives an interesting analogy. He is also a Doctor of the Church and a great guide, and he wrote a treatise on the papacy with great respect and love, really trying to defend the papacy. But in his treatise on the papacy he also clarifies the question of whether there could be a situation where someone would be called even to “resist” — those are his words — to “resist” the Pope.

I think perhaps Aquinas is clearer, but you certainly have a number of other examples in the Church saying that this really is simply the Catholic attitude, a very sad step to have to take, but it’s our duty as Catholics to take this step when that situation arises. In such a situation, I would say that it is simply the Catholic thing to do.