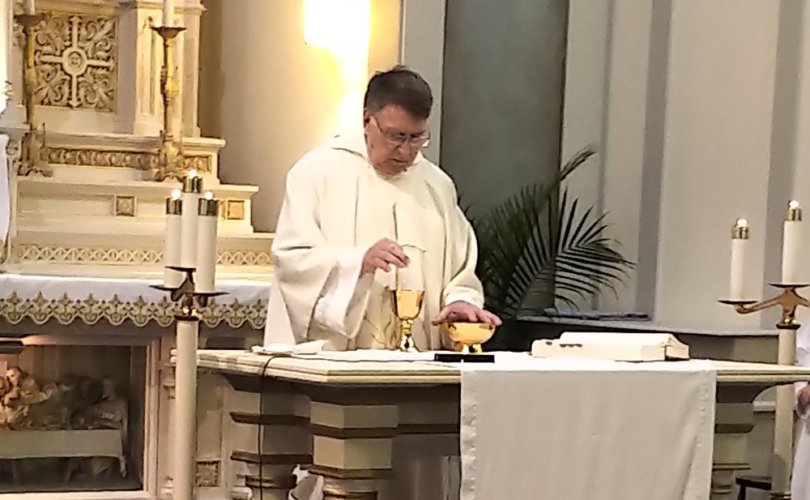 PICTON, Ontario, June 17, 2019 (LifeSiteNews) – A Catholic priest who told his parishioners last week that they should “not attend” pro-homosexual pride events in June is standing by his message despite pushback from LGBT activists and even his own archbishop.

Fr. Robert Chisholm of St. Gregory the Great Parish in Picton, Ontario refused to apologize this weekend for the anti-Pride bulletin announcement despite more than a hundred LGBT protesters in rainbow regalia showing up outside his church doors on Sunday to protest and despite being publicly reproached by his archbishop.

Last week, Fr. Chisholm told parishioners, as reported by LifeSiteNews, that “Catholics and all other Christians should not attend LGBTQ2 'Pride Month' events held this month.”

“They promote a culture and encourage activities that are contrary to Christian faith and morals. This is especially harmful to children because it could lead them away from God’s revealed Truth,” he wrote in his June 9 bulletin.

The announcement provoked immediate backlash from LGBT activists who organized a demonstration outside the parish during the 10 AM Mass on Sunday.

“Let’s keep it loving… the words of one bigot don’t follow the congregation. He does have to know that this is a loving and accepting community,” stated LGBT supporter Tabitha Kay about the protest in a Facebook post.

Faithful Catholics within the Church prior to the 10 AM Mass responded by praying the rosary and the St. Michael’s prayer for safety and protection.

“I did not sanction this message, and it does not reflect the spirit of accompanying charity and compassion that should always characterize our faith. The archdiocese has spoken with the pastor of the parish. He regrets any hurt his inappropriate comments have caused,” Archbishop Mulhall stated.

LifeSiteNews reached out to Archbishop Mulhall by phone to ask what was “inappropriate” about the priest’s statement, but did not receive a response by press time.

Instead of giving his customary homily during the Sunday service, Fr. Chisholm told the congregation that he was going to read a statement about the matter that came from the archbishop’s office since he had been directly told that he should not preach a homily.

In a three sentence paragraph, the priest referenced the comments that were made in last week’s bulletin relating to Pride month. He said that he now realizes some Catholics and non-Catholics were “offended” by the bulletin announcement. He then said that he apologizes for “any hurt” that he caused.

Jeff Gunnarson, national president of Campaign Life Coalition, who attended the morning Mass in support of Fr. Chisholm, told LifeSiteNews that the priest “read that statement in such a way that he did not apologize.”

“Fr. Chisholm made it clear that this was not his statement,” he said.

Gunnarson related that after the homily, Fr. Chisholm walked from the pulpit to the sanctuary where he led the congregation in the Church’s custom of reciting the Nicene Creed. It was after this that the priest was moved to sing “Faith of Our Fathers,” a 1849 famous Catholic hymn that commemorates the English martyrs who held fast in their faith rather than submit to the church of England created by Henry VIII and Elizabeth.

The words of the song sung by Fr. Chisholm are the following:

Commented Gunnarson: “Prior to singing the song, Fr. Chisholm explained that the song, when it mentions ‘dungeon, fire, and sword,’ refers to the various ways these Catholic martyrs were put to death.”

“While not commenting on his previous bulletin announcement in any way, it was as if Fr. Chisholm were telling the congregation that we need to proclaim the faith today without apology, without hesitation, even if it means becoming martyrs for the faith,” he said.

“It’s as if he were saying that this is how we respond to such events as Catholics: We have to look to the martyrs,” he added.

Gunnarson commented on Archbishop Mulhall calling the priest’s bulletin announcement “inappropriate,” saying that it was really the Archbishop’s statement that was “inappropriate.”

“Fr. Chisholm did the right thing to educate his parishioners about the danger of Pride events, basically warning them that participating in these events could be to the ruin of their souls.”

“It’s downright cowardly to not back up your priest who's come out boldly against lifestyles and choices that are contrary to Catholic morals and teaching,” he added.

“Your kids will probably see boobs and penises. There will [be] bodies of all shapes, sizes and in all states of undress,” wrote the CBC's Alice Lawlor in 2016 as she outlined to parents what they can expect when they bring their family to a Pride Parade.

Participants usually perform hyper-sexualized dancing with twerking and grinding. This year at a Washington D.C. Pride event, pro-LGBT revelers vandalized a police car [WARNING: Link leads to sexually graphic material] by climbing onto the hood and performing public sexual acts with various parts of the car.

It is generally acknowledged by those on the right and left that the parades exist to push the acceptance of homosexual lifestyles and the behaviors that go with it.

A petition in support of Fr. Chisholm launched by LifeSiteNews has been signed by over 1,500 people.

“Thank you for your courage in fulfilling your duty to keep your flock safe by warning them of the spiritual danger of partaking in LGBT ‘Pride Month’ events,” the petition states.

“The LGBT ‘Pride’ message is increasingly overtaking the culture right now, and is even infiltrating the Church herself, presenting a grievous risk to our faith and the faith of our children,” it continues.

“As Catholics, we believe that all men and women deserve respect and compassion, but at the same time, we can never ‘respect’ sin or an agenda to promote sin. We support you and pray that the archbishop will repent of his actions, and choose rather to defend you in the face of these protests,” it adds.