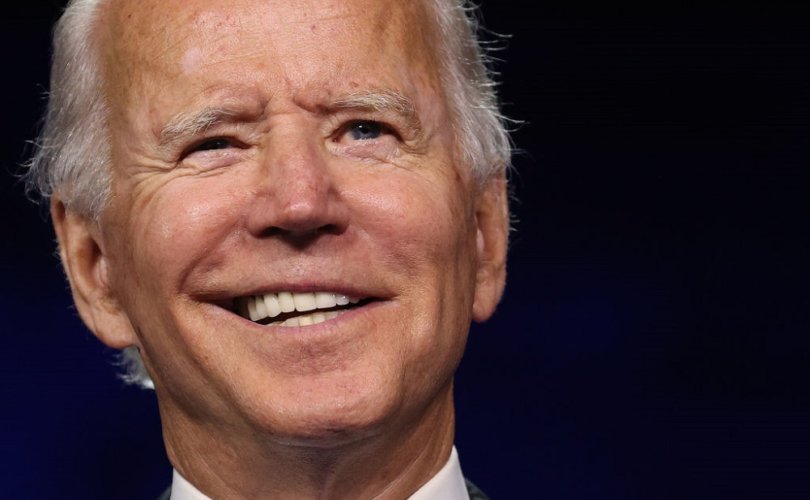 BOSTON, Massachussetts, August 27, 2020 (LifeSiteNews) — A priest of the Archdiocese of Boston has said he’ll vote for Joe Biden come November, arguing that the notoriously pro-abortion Democratic presidential candidate is “pro-life like me.”

“I will vote for Joe Biden for President because I believe that Joe Biden is pro-life like me,” wrote Msgr. Paul V. Garrity on Facebook. “I believe that any woman who becomes pregnant should have the the [sic] right to choose to give birth to her baby.”

The priest said he supports “a woman’s right to choose,” which is a euphemism for a woman’s legal “right” to have an abortion, while in the same sentence claiming to be “pro-life.”

He went on to list what pregnant women should be provided with in a civilized society in order to be able to choose life. He never acknowledged that being pro-life also requires a person to be against abortion, which includes being against any legal “right” to procure or perform one.

In contrast to Garrity’s claims, numerous priests have come out saying that no faithful Catholic can vote for Joe Biden.

Fr. Frank Pavone, national director of Priests for Life, said Biden’s “failure to protect the unborn puts him not only in conflict with the Catholic faith but with the Christian Gospel, the Founding principles of America, the very meaning of public service, and basic human decency. You can’t kill babies, and you can’t authorize anyone else to do so.”

“Joe Biden has stubbornly and contumaciously ignored Church teaching on abortion and Religious Freedom,” said Fr. Michael Orsi, a priest of the Diocese of Camden, New Jersey, who currently serves as parochial vicar for St. Agnes Parish in Naples, Florida and is a former chaplain of Ave Maria School of Law in Naples.

Fr. Stephen Imbarrato, an activist pro-life Catholic priest, a regular on EWTN, and a member of Red Rose Rescues, simply commented, “No Catholic can vote for Joe Biden.”

In his Facebook post, Garrity tried to support his position by referring to Pope Francis. “I encourage people to share these comments which, I believe, reflect the wisdom of Pope Francis in Gaudete et Exsultate.”

“Our defence of the innocent unborn, for example, needs to be clear, firm and passionate, for at stake is the dignity of a human life, which is always sacred and demands love for each person, regardless of his or her stage of development,” the Holy Father had written in his 2018 apostolic exhortation.

“Equally sacred, however, are the lives of the poor, those already born, the destitute, the abandoned and the underprivileged, the vulnerable infirm and elderly exposed to covert euthanasia, the victims of human trafficking, new forms of slavery, and every form of rejection.”

In fact, contrary to the priest’s insinuations, the Catechism of the Catholic Church maintains that “[t]he inalienable right to life of every innocent human individual is a constitutive element of a civil society and its legislation.”

“The inalienable rights of the person must be recognized and respected by civil society and the political authority,” the Catechism explains. “These human rights depend neither on single individuals nor on parents; nor do they represent a concession made by society and the state; they belong to human nature and are inherent in the person by virtue of the creative act from which the person took his origin. Among such fundamental rights one should mention in this regard every human being’s right to life and physical integrity from the moment of conception until death.”

In July, Biden dedicated one section of his official Agenda for Women to “Reproductive Health,” which is generally a reference to abortion. The former vice president under President Barack Obama said he “will work to codify Roe v. Wade, and his Justice Department will do everything in its power to stop the rash of state laws that so blatantly violate Roe v. Wade.”

Roe v. Wade is the 1973 Supreme Court ruling imposing legal abortion across the country under the guise of a woman’s right to privacy. Many states passed legislation trying to limit the widespread killing of unborn babies. One piece of legislation is so-called heartbeat bills, which prohibit abortions as soon as the unborn baby’s heartbeat can be detected after roughly six weeks of pregnancy. Lower courts have overwhelmingly ruled against such laws, thereby nullifying them.

Planned Parenthood commits more than 345,000 abortions annually, according to its most recent report. Additionally, the organization handed out more than 593,000 “emergency contraception” kits, containing what is commonly known as the morning-after pill, which can also cause abortions.

Msgr. Garrity seemed to be unfazed by Biden’s determined position to ease the killing of babies before birth. According to the Catholic News Agency, “The priest added that in his view, Catholics ‘are also told that we should not be ‘single issue’ voters’ and that the Church is ‘neutral’ on the issue of voting.”

However, Catholics cannot vote for a candidate who campaigns on depriving a certain segment of the population, in this case unborn children, of an inalienable right.

Additionally, Pope Benedict XVI said in 2006 that there are several “principles which are not negotiable” in politics, including “protection of life in all its stages, from the first moment of conception until natural death.”

Going public with his support for Joe Biden is not the first time Garrity expressed sentiments contrary to Catholic teaching. In an opinion piece for The Boston Pilot, the Archdiocese of Boston’s official newspaper, he claimed that Church teaching on divorce is no longer tenable.

“It is ludicrous to assert that divorced couples who have found love and fidelity with new spouses are still recognized by the Church as being married to their former spouses after the passage of many years,” he wrote in 2015.

“It is equally untenable (and disrespectful) to try to convince these happily married couples that, in fact, their relationships are sinful,” Garrity added. “Moreover, the Church’s current prohibition regarding the reception of Holy Communion by divorced and remarried couples would seem to be at odds with the consistent teaching of the Gospel about love, forgiveness and mercy.”